Cabin Camp in the Cold

Having a few days after Christmas to spend in the woods is always a great present to myself. I was meeting friends on Thursday in Saratoga, so I was looking for a location in the Eastern Adirondacks. I was simultaneously making plans with two other hiking buddies and it all came together to camp at a rustic cabin and hike around the Hammond Pond Wild Forest. I picked up Dan early Tuesday morning and we made our way to North Hudson. With our gear loaded into my pulk we hiked the 10 minutes to the cabin, unloaded the sled and Dan went back for the second load. Justin was already at the cabin doing some repair work. We settled in and talked about our plans.

That afternoon we hiked the trail from where we parked past Trout Pond and then to Round Pond. The pond was snow covered and the ice seemed safe so we hiked across the pond to the campsite. We kept our distance from each other just in case. We stopped at the campsite for just a few minutes and then hiked around the shore of the pond back to the trail. As we hiked back to the trail head we could already feel the temperature begin to drop. Back at the cabin, we added a load of wood to the stove and got dinner ready. I made rigatoni with tomato sauce and sausage and meatballs. We ate like champs but still had some leftover. Justin helped me with the dishes. We talked and listened to music. I went to be early before the others.

The next day was already cold, and we knew it wasn't supposed to get much warmer and the night could drop to 20 below. After a feast of breakfast we decided on our plan for the day and got our day packs set. Justin had wanted to do a loop to Eagle's Nest Lake and climb Harris Hill. We first hiked to the nearby cabin to see the view from below their deck. Then hiked on to some meadows and marshy areas on our way to the drainage that was the outlet of Eagle's Nest Lake. Along the way we walked through some stands of cedar trees, noting that there were a lot of young growth at the base of the older trees. I wondered aloud whether it was growth from the root stock of the older trees. Justin had come this way before, but only to one of the meadows right before the drainage we would then follow. We took a break near where Justin had turned around, it had been a little more than an hour since we left camp.

Dan led the way up through the drainage. There was a lot to maneuver around, over and through. Eventually the outlet was to choked in so we headed up and away from it. The Lake was close. we could see the white surface from our higher vantage point and made our way to it. We would stop here for a lunch break. we chose to sit on some logs to face the cliffs on the North side of the lake. After lunch we crossed the lake to the campsite just east of the cliffs and began our climb up. We stopped for a bit towards the top where we would turn west. There was a open area with oak trees around. We headed west gaining more elevation to eventually reach our goal, the summit of Harris Hill. The sky was clear, the trees were icy, and the view spectacular. We took some pictures and had a snack. We would continue westward to two other summits, able to see the views of the high peaks along the way. Pausing at each of the summits and other vantage points for photos and to relish in the visual experience. The last part of the hike would be almost a straight shot to the cabin and downhill through mostly open hardwoods. We headed downhill towards the setting sun and were back well before dark. 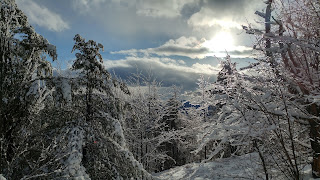 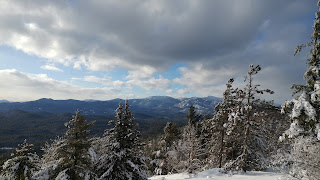 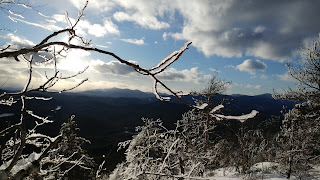 A feast of venison, chicken, swiss chard, sweet potatoes and mashed potatoes was prepared. We ate and celebrated Meat Festivus 2017. I joked the only airing of grievances I had was that Rob wasn't here. We listened to music and enjoyed each others company until it was time for bed. I wasn't the first to lie down in my bunk, but I might have been the first to fall asleep. I awoke at some point in the middle of the night and added logs to the stove. The steel was cold, but there were just enough coals to get the dry wood going. In the morning it was 12 below zero. Not as cold as we expected, but still frigid. I put the water on the stove so we could have coffee and cocoa. After breakfast we cleaned up, Justin finished the last of the repairs and we closed up the cabin. Back at the car and it was still below zero. My car had a rough time getting started. Apparently other parts of the Adirondacks were much colder. Another great trip with great friends.
Posted by DuctTapeADK at 8:32:00 PM