Trail Maintainence on the NPT

Spent two days clearing 4+ miles of trail along the NPT between the Sucker Brook junction and Cedar Lake dam. Clearing blowdown with hand saws, and cleared drainages to allow water to better drain. Had to hike in 5 miles just to get to the section, then another mile to clean and assess the Colvin Brook lean-to. Had to ford the Cedar River knee deep to get to the lean-to. No log book entries since last October. Spent the night at Cedar Lake. Next day hiked out the 9 miles while pruning back the liw growth from the trail. As Chuck would say, "camping with a purpose." And much thanks to John H for lending a hand.
Posted by DuctTapeADK at 6:52:00 PM No comments: 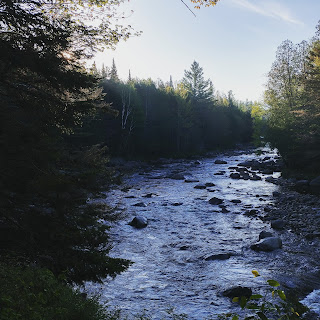 One of my favorite hikes in the Adirondacks is the circumnavigation of the Seward Range, aka The Cold River Loop. This 30 mile loop includes a 10 mile section along the Cold River, arguably one of the best 10 miles of the entire NPT and also the most remote. I had a few people join me on this trip since I opened it up to the NPT Chapter and also the local meetup group. 3 of my companions I had hiked with in the past, and we were joined also by Amanda and Jillian.

A slightly late start from the Seward summer trailhead on Amperanad Rd., we donned our gear and headed up the approach trail . I realized this was going to be rough for the newcomers as one was slow to go right from the start. Over the next 3 days, her struggle would become apparent; a lot of very heavy food. we made the turn and headed down the horse trail past the cairn for Calkins Brook path up Donaldson. At The Calkins Brook lean-tos we paused for lunch. Both us eating and the skeeters eating us. We expected black flies to be in full force this weekend, but it was the mosquitos which were most annoying. Lunch was quick as we wanted to get moving.

we continued down the horse trail all the while the group joked about it "being all downhill from here" even though we constantly had small hills to climb over. When we eventually reached the Cold River, we were at the lowest elevation of our trip. We had made very good time. Camp was set up, and we hung out for the rest of the evening.

Like usual I was up before everyone else. I started a fire and made myself some coffee. I tried to keep quiet, but I still managed to awake Kim whose tent was quite close to the firepit. Eventually everyone else was up and eating breakfast. With larger groups, it takes longer int he morning as the group is only as fast as its slowest member. we eventually heading down the trail; upstream of the cold river. Pausing at the different lean-to's along the way. We took a long break at Seward to sit on the rocks. A group which had stayed at CR#4 also stopped. A few of them opted for swim in the cold water. We continued on with a break at the Ouluska lean-to. I helped Amanda with some blister issues. From here it was a long 4 miles to the next junction. we were moving slowly and I expected the group would want to stop at CR#1 or #2 for the night, but they opted to press on to Camp 4 so as to have a short day tomorrow. I think the expectation of rain was a major influence. By now the other group had leapfrogged us, also heading towards Camp 4. Apparently they were doing the same loop as us.

We caught up the other group at camp 4, and as I was getting firewood, they chose to continue on to another location. everyone was setup and dinner was had. Not much talking as most were tired. A couple times I though there was some napping at the picnic table. Still smiles though. Jillian was always good a quick smile if I asked. I shared some of my steak with those who wanted it. I set aside wood for the morning in anticipation of the rain.

The night was much warmer than the previous. I slept int he lean-to as I had not bagged this one yet. This time no one was camped near the firepit, so I was able to get the fire going in the AM without waking anyone. The much anticipated rain had not come. we packed up and were on our way. Soon though, the rains came. We would hike the rest of the way in the rain. Just enough to need rain gear, but no much that everything was soaked. With the rain, and tiredness of the group, it was a less talkative section. At the junction for the approach trail I joked that if we took a left we could do the loop again.

Back at the car, we said good bye to our hiking companions and began the drive home. As with all my guided trips, I send out a survey to learn what I can do to be a better trip leader as well as share photos with each other.