I have had this trip on my to do list for many years. Other options always seemed to be higher on the list. I was up in the air on exactly where to go this weekend, so I figured I might as well do one of the less used trails. This would be a solo trip, so lots of quiet time and sleep. Woods and a waterfall are perfect for this.

The new parking area would put me a few miles closer than it would have been just a few years ago. So it makes for another choice for a quick trip. I arrived to an empty parking lot; quite different from last spring when I drove down the road to see the upgraded road. I wondered if it was because I was early or some other reason. From the new lot it was just over a mile to the junction. Since this portion of the jeep road had not been upgraded, it provided a sharp contrast between the old and new. My map had my destination labeled as 3.8 miles from here. The new sign had it as 4.8 miles. I know that often the signage and maps will have discrepancies and sometimes neither are correct. This trail is used in winter by snowmobiles so will be rather easy to follow, and it was. Evidence of illegal ATV use was prevalent along the way. If the summer had not been so dry, this would be a sloggy mess for most of the trip. I knew it was a wet trail in general, so perhaps this played into why I waited so long to hike it. In general I had been gaining elevation, ever so slightly. The last bit would be a steeper drop. I was surprised when I started to lose elevation so soon. I filled up my water bottle at a small stream, assuming this was just a minor drop and I would begin gaining again. It was beginning to warm up. There was a chance of rain midday and it was overcast. Except for the humidity, it was rather decent hiking weather. There was a quick rise after the stream, but then I started a sharp descent which curved around a hill. The sound of rushing water was heard signifying I was getting close to the campsite. The volume increased and the lean-to came into view. I unshouldered my pack and checked the time. It was an hour and a half since I left the car. The signage distance was definitely wrong, and since I was not walking particularly fast, I believe the map was too. 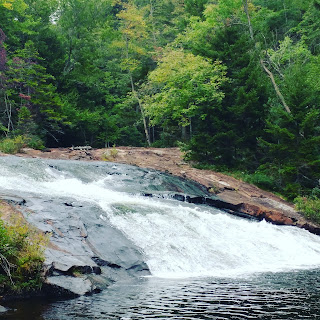 I visited the falls, and refilled my water bottle. I quickly gathered a bit of wood in case the rains did come. As I was solo, the remainder of the trip would be gathering wood, sleeping, thinking, eating, etc... I stashed a small amount of wood under the lean-to overhang to stay dry if the sky opened up. It wasn't long after a few sprinkles started raining down. This was expected but I did not know how long it would last. I began to read the shelter log book and the rain stopped soon after I opened it. A few pages had fallen out, but the first caught my eye. The entry was from Paul, of Lean2Rescue listing all our names and what we accomplished that trip.

I had been to this lean-to before, but I had come in from the trail to the south. The purpose of that trip was to help fix the lean-to with the group Lean2Rescue. On one of the online forums I frequent, I had read about some of the work, and seen photos of this crew. I sent a msg to the guy who had posted them to inquire as to how I could help out. Chuck replied quickly and got me on the list. Over time, he and I would talk while on L2R trips, we camped together and communicated via email as well. He told me that I was the only one who had ever sent a msg asking how I could help out. My first trip with the group was to help fix Sand Lake Falls. The entry from Paul (our "leader") was from 8 years ago this very weekend. I pondered the significance of me joining lean2 rescue and the choice to send Chuck that msg all those years ago. Had I not, I likely would never had joined up, never would have met some good backpacking folks, and gone on some of the crazy adventures I chronicled the last few years. I am certain I would have had different adventures, but probably not with the same people or to the same places. Chuck, George, Paul, Judy, Dan, etc... All of them I met because of Lean2Rescue. The trajectory of my adventures took a very different path thanks to Chuck posting online, and my choice to send him that message.

The calendar held other significance as well, of a more global perspective. This was also the anniversary weekend of 9/11. The world took a sharp turn on its path due the events on that day and thereafter. While my adventuring life is certainly different than what it would have been due to the paths taken in my life, the entire world is very different after that junction in time and the choices made throughout the world in its aftermath. Of course history, whether an individual's or that of the world was going to exist in some form, and the present would be a manifestation of the sums over history (just a little shout out to Feynman), the paths taken are what we are. I suppose many of us are being reflective this weekend and it just so happens I had a small (relatively insignificant) connection to the date unbeknownst to me before.

The sun came out, and the combination of its warmth and the sound of the waterfall lulled me to sleep. After a quick nap, a few more camp chores, I read more of the shelter log. A smoky fire to keep away the mosquitoes which have found me, then dinner, then a long slumber. More rains came in the middle of the night, and continued into the morning. The walk out was wet, the sky was dreary consistent with how many people were feeling today. And as it always does, the sun eventually parted the clouds.