Arrival of Winter in the ADKS

There was a little snow on the ground when we pulled into the parking area just off Route 28. I arrived only a few minutes after Justin. We anticipated more by the end of the trip. As we loaded Justin's gear into my car, our friend Bill arrived. He would be day hiking nearby and we let him know of our plans, so he could join us at our campsite if the time allowed. At the trailhead we opted against snowshoes. Justin started with microspikes. The hiking was easy along the old jeep trail. Some bridge repairs had been made. They were not as big as I thought. It also looked as if they used vehicular support to bring in materials. We stopped at the hunters campsite I had found a few years ago. The tent was not set up this time.

Soon after the trail junction we took a general bearing and began to follow alongside the drainage to try to locate the position of an old camp we noted on the 1903 topo map. It was thick, and mucky so we began to move up and away from the drainage to higher ground. After some exploring and poking around we were quite sure we had found the general area. Justin headed down towards the stream and I poked around a bit more inland. We took a bearing for a more direct route back to the trail. This would prove much easier as it was open hardwoods. We popped out on the jeep trail just past the junction and the drainage.

We stopped at Middle Branch Lake just to look around a bit and momentarily lamented we had told Bill we would be at Middle Settlement Lake as both of us would have been happy to make camp here. I ate my lunch. Onwards we went to Middle Settlement, this would make tomorrow a much shorter day too. The distance between the two lakes isn't great, but it sure feels like it. The trail is a series of ups and downs and some wet areas as well as a stream crossing. It is a rugged little section of trail. Beavers had made a mess out of a few areas, two which required finding a way across the flooded section. The stream crossing was not as bad as it first looked. We were able to rock hop it. At the outlet of Middle Settlement Lake we somewhat expected to see footprints as there were cars in the parking area as we passed by on the way to our trailhead. Crossing the outlet is always an adventure here. As I made my way, Bill arrived. Justin and I were quite a bit later than we expected and Bill a tad earlier. It would work out well with 3 of us collecting wood. 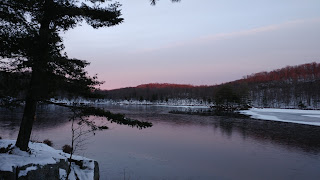 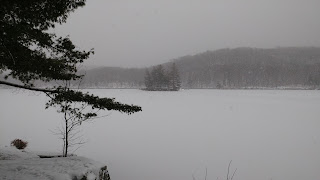 We dropped our gear at the lean-to and began collecting firewood. With the 3 of us, we soon had a decent pile. As the sun set, the sky had a nice pinkish glow to it, and the lake was just beginning to have a thin layer of ice. We got the fire going and hung out. I was tired and ended up not even eating my dinner. I went to bed early and slept soundly. Snow came through the night. Not as much as we expected. I re-started the fire from the remaining coals and took a photo of the now snow covered lake. After breakfast we packed up and begain our hike out. The snow was gently falling for most of the hike. Bill led the way mostly. At this point I was glad we had done the extra miles the previous day. We all loaded up into Justin's car and dropped Bill off at his car, and then me at mine. A fun little adventure. Justin's video of the trip: https://youtu.be/OzFES3wGeeQ
Posted by DuctTapeADK at 5:08:00 PM