As the title states, this was my annual winter trip to end the year. Like last year, the weather was not exactly winter. Thanksgiving has been the colder of the trips recently. We had a circular route planned which would take us into the Pharaoh Lakes Wilderness and include acouple of mountains. As the trip approached, we opted to change direction to have the lean-to for the bad weather nights. Andy would join us on day 2, so we updated him with our itinerary change.

Dan and I set out on the old road leading to Pharaoh Lake. Only 3.2 miles, then another half to the lean-to. Heavy packs due to both cold weather and rain gear, plus 5 days of food. No snow, else we would have pulked it. The trail was easy going, generally an uphill grade the whole way. With snow, it would have been quite pulk friendly.

The lake was frozen except for under the outlet bridge. From here the trail to the lean2 would be slightly more rugged than the old road. We dropped our gear at lean2 #6. What a beautifully constructed lean-to and a decent view of the lake in front. We checked out the ice and wandered down the lake to #5. This double-wide lean2 was near a rocky point. A great spot for sunrise/sunset with a great expansive view of the lake. Much of the immediate area was roped off though to revitalize the trampled growth in the vicinity. We opted for the previous lean-to and headed back on the ice.

By now we only had a few hours of daylight left so collecting firewood was priority #1 as we expected rain overnight and all the next day. This was surprisingly easy even in an area which gets a lot of pressure. After wood was procured we set up camp and started dinner preparations. It was too early to eat but it would be getting dark soon. As the sun set the temperature also began to drop.

Our second day we expected to be wet which it was. I started our morning fire before the sky really opened up on us. Soon after we had a reprieve from the rain. After breakfast we decided to take a walk around the lake. With the rain, there was a layer of water covering much of the ice. Some areas were quite deep. We checked out most of the campsites and lean-tos around the lake. Stopping to read the log books and the lean2s as well as try to find the oldest carved date in the logs. Split Rock lean2 had the oldest date seen at 1965. One could tell thisstructure was much older than the others by its design. On the wayaround the lake heading back to camp we saw an area of ice which looked a bit unsettling. Playing it safe, we went over land to avoid it. As we approached camp, smoke rising from the fire alerted us to Andy's arrival. 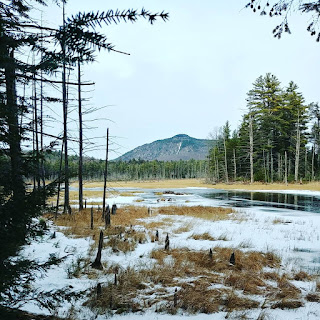 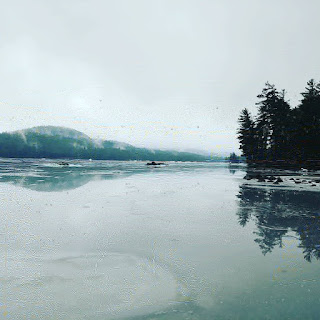 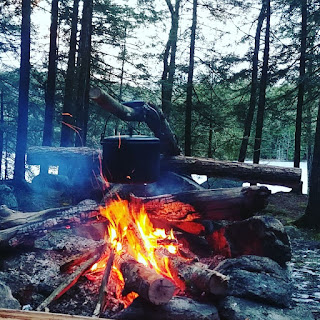 With more recent weather forecast information we decided to not move camp to Crab as originally planned, but to day-trip to it and the nearby mountains. The next two days would be nice, but the last would include freezing rain. Packing up frozen gear was not inviting.

Saturday we loaded up day packs and headed across the lake to pick up the old trail to Whortleberry and then to Crab. The first was easy to follow and it was short. At Whortleberry we crossed the ice and checked out the different campsites. Towards the end we headed into the woods towards Crab following a herd path. Not long after we spotted some blue paint markers heading in our direction. Someine had apparently blazed the path to Crab for us. As we approached Crab, a pair of boot tracks came down the hill and joined our path. These were recent. A "Hi" was drawn in a snow patch. I wondered aloud if these were justin's tracks as he knew where we would be. A makeshift trail sign indicated Crab pond was in the direction from which the boot tracks emanated and ____ falls continued on ahead. Andy would continue down the path and I would follow to boot tracks. We would meet at Crab pond. Dan soon came down the trail and joined me following the boot tracks. At the top of the drainage Crab was visible. We dropped down to lake level. As we put on our microspikes, justin appeared on the peninsula at the campsite atop the hill.

Justin had set up camp, expecting us within a few hours at most. Justin gifted us a couple each adult beverages. Thanks bud! Andy soon arrived from other direction. We planned to climb Stevens Mtn, then return to camp. Justin would hike with us most of the way and then head back to Crab. On the hike to Stevens, Andy opted to turn back to camp as the terrain was a struggle for him. The open hardwoods were easy to navigate, but the terrain was steep. At the top of Stevens we had lunch and took some photos. Then took a bearing to head down a different way. This would be along a northern facing slope so there was more snow and the vegetation was thicker conifers. Some rocky ledges also to deal with. We came to the edge of the long arm with a view of Whortleberry and Pharaoh. From here Justin headed towards Crab while Dan and I headed towards Whortleberry. 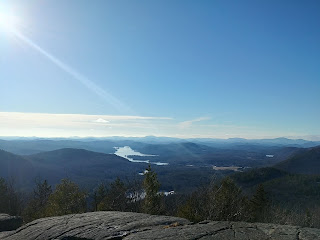 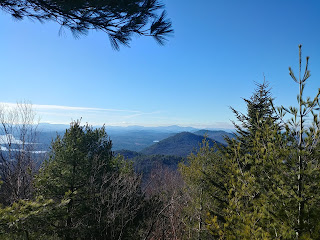 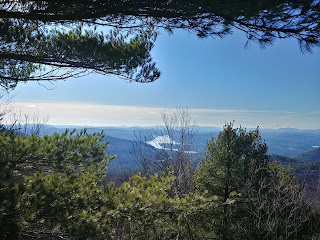 We both picked our way down the steep slope. At one point a small rise was between us which muffled the footsteps from each other. We both reached Whortleberry close to the same time. We crossed the ice and tried to find the trail on the other side. There was remnant of trail which diverged. Dan and I split taking different approaches to Pharaoh meeting up at lean-to #1. We crossed the lake together to where Andy was waiting. We passed along Justin's well wishes and we had agreed to an 8 o'clock toast.

The forest began to darken as the sun made its way to the tops of the trees. Nowhere near time for dinner. We each made a hot drink; soup or cocoa. Coyotes made their evening howls. An updated weather report provided us with optimism for the next day. We were all tired, but we stayed up long enough for the 8pm toast. The sky was mostly cloud free so we ventured out on the ice to view the stars. A crescent moon with Venus just above it was bright in southwest. Orion and Gemini were very clear as well.

The night was cold enough that all the slushy layers on the lake were now completely solid adding another inch of ice on top, and likely even more below whatever was already there. We made breakfast and packed a lunch. The goal was to climb Pharaoh Mtn. 1400+ feet of elevation difference from its namesake lake and only 1.6 miles makes for some steep sections of trail. There were two steep sections with a gradual uphill between them. The first was steep through the forest. After the level section the elevation was through a lot of rocky sections. Some involved scrambling for foot and hand holds. It was fun trying to figure out how to climb some of these sections.

The views from Pharaoh's summit did not disappoint. There were other outcroppings which provided views as well. All put together we had just about 360 degrees. We shared the summit with another group of three who came in from Crane. For the descent we donned spikes as the ice was a bit tricky on the ascent. This was a smart move. We had to remove them for a couple of the rocky scrambles though. 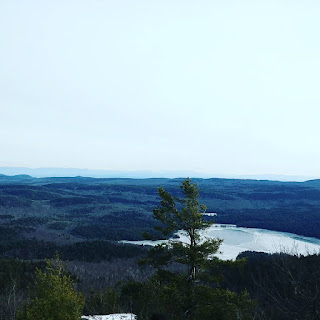 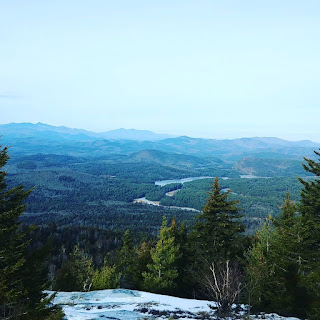 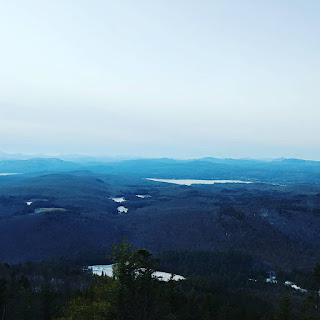 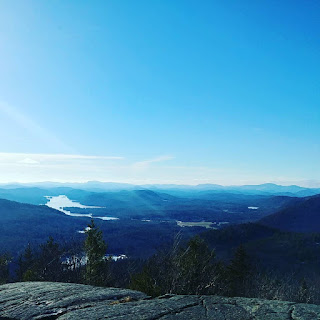 Back at camp we gathered a bit more wood and stashed it under the lean-to as we knew it would be needed the next morning. We barely stayed up past 8pm. Freezing rain came overnight making the ground icy and the trees glistened like jewels. As branches fell from the weight, the ice would shatter like glass. We were glad to not have to take down frozen tents and have a dry space to pack up. We hiked out with on-off rain coupled with frozen branches shattering throughout the woods. The trail out being mostly downhill went quickly. The drive on icy roads went quite slow.

The largest group ever for our Adirondack style Thanksgiving. The location was chosen to entice Ian to join us, but work responsibilities interfered. During the lead-up, Eric would joke "who is this Ian?" as it has been a long time since he has been able to join us for turkey day.

The parking for Holmes was expected to be an issue, so we had a back-up plan in case of too much snow. What we did not anticipate was the condition of the dirt road. A lot of muddy ruts, rocks and washouts. It was amazing my car made it. In hindsight, I should have parked at a pull-off earlier. From the gate, it was only a mile to camp. Thursday was cool, upper 30s, and the trail was sloppy. We arrived with plenty of time to gather wood and start a fire.

In the afternoon, Jennifer and her puppy "john lennon" arrived and we put the chili on the fire. As it was close to being ready, eric slipped on the ice and almost fell into the fire. He avoided injury, but the chili did not fare so well as the pot flipped over. We had to eat our hot dogs with normal condiments.

Evening comes early in winter, even though it still is technically not winter. Eric and I crashed in the lean2, while Jennifer (and johnL) slept in a tent. Was expected to get colder. Friday night was to be the colder of the nights though. We were glad the lean-to was well away from the lake because near the lake was considerably colder.

Slept like a champ, Eric and Jennifer not as well apparently. I restarted the fire and put on a pot of water. The lakeside was still much colder, but pretty in the morning dawn. 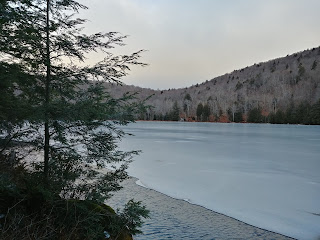 We collected more wood and took a few strolls through the woods while waiting for the rest of our party. Andy was the first to arrive, followed shortly by Kalie and Chad. This was Kalie's 3rd Adk Tgiving in a row, and second for Chad. We all joked around, gathered more wood. Took a few more strolls. Sang a few bars of Alice's Restaurant. Then back at the campfire cooked up a Thanksgiving dinner which couldn't be beat. We certainly ate a lot. Turkey came out divine.

After dinner we loaded up the fire with some nice cherry backers which provided a lot of heat once they got glowing. We all went to bed and like usual I was the first one up at first light. The fire still had some coals which I fanned back to life. 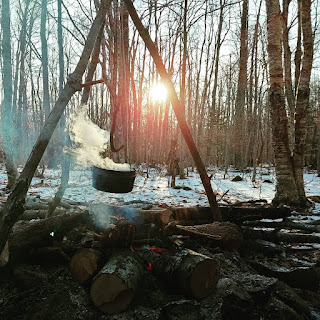 After breakfast and cleanup we made the long stroll downhill for a mile where are cars awaited. 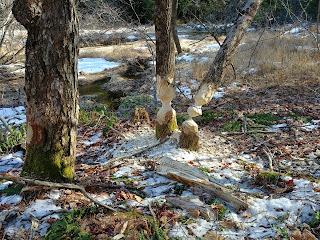 The drive out was rather treacherous as the road was now icy and rutted. We drove slow; slower than if we walked it. I do not think I will try my luck on that road again. Looking forward to next Thanksgiving as our crew is growing.
Posted by DuctTapeADK at 1:05:00 PM No comments: