Earlier this month I had aborted the trail to Preston as the trail breaking with a full pulk was nearly impossible. This would be the next attempt with a crew and a strategy to ensure success. We would start Thurs morning, but I am getting ahead of myself.

On Tuesday morning I picked up Dan at his place and we drove to the trailhead for Kibby Pond in the Wilcox Lake WF. The plan was just a day hike. Upon arrival we could see the parking was non-existent due to snow. After consulting the maps for plan B, we then drove to the trailhead in the Siamese Ponds WA for Second Pond. The parking area was plowed out, so we ate lunch and grabbed our day hike gear after donning our snowshoes. The temp was in the teens, and a bright sunny day. At the trail register I noted a friend had skied in the other day. The trail was generally uphill for the first mile and a quarter, gaining about 200 ft to a lower contour of Height of Land Mtn. The trail then undulated for a mile as we paralleled to the mountain north. The last mile would drop almost 250 ft to the pond, most in the final half mile. At the pond we explored for a bit, checking out the small island and some of the shoreline. We were tired. We had planned on a shorter day hike so we headed back. It was nice having the broken out trail and the final mile being downhill. The trail register does not indicate the trail gets all that much use though the ranger patrols it regularly.

We then drove to Mark's cabin for dinner. Dan had made a lentil curry which was awesome. I slept well, and we awoke to outside temps in the single digits. We had breakfast and loaded the packs for an overnight in the woods. Drove to Stony Pond trailhead in the Vanderwhacker WF. Dan was part of the lean2rescue crew which moved this lean-to away from the water's edge. The trail was only 2 miles but we had our winter gear. We arrived to an empty lean-to, made camp and collected wood. The fire put out a noxious smoke all afternoon and evening. We used downed maple and beech like usual. Wondered if one of the logs had a strange fungus on it. After exploring Stony Pond, which had a very unique shoreline profile, we headed back to camp for dinner and bed.

Slept great. I think it warmed up a little over night. We headed back to the car and drive to Upper Works to meet the crew headed to Preston Ponds.

There were a total of seven of us. Pete and I would take the lead breaking trail since we had only backpacks (no pulks). He and the ithers were still packing up so Dan and I headed out first. The wind on Henderson was brutal. The snow was crusty and settled only a few inches. The wind came in sheets sometimes forming a vortex in the bays momentarily. At the Henderson lean-to we took a lunch break. When Pete arrived, he and I started down the trail. In 5 minutes we reached the first log bridge. Last time we crossed just downstream of it. But now it had open water. We hopped across just upstream and Pete began clearing the 5-feet of snow off the logs. I scouted further upstream and found a potential crossing. I dropped my pack and cleared a trail across for the pulks. Pete came over with his camera to get some photos when the pulks would cross, so I took the lead down the trail. Breaking trail is much easier without the pulk, but still difficult. Pete caught up to me at the next log bridge just after I cleared a safe crossing. He took the lead at this point. We would take turns all the way to Preston. On the big hill, we swapped a few times. At one point I paused after digging in my next step up when it ended up lower in the snow than the previous step. I joked that I was going downhill. It was tough going. No way would I have been able to do this with a pulk. 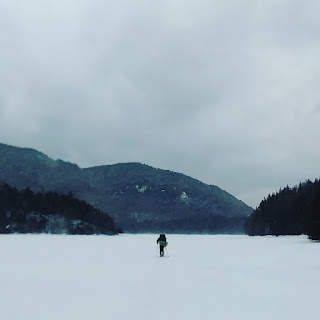 At Preston, the winds were just as bad as Henderson. Some gusts were so strong they almost knocked us off our feet. They would explain the snake-like meander of our tracks across the lake. Once we arrived at the Preston cabin, Pete dug out the doorway, and I dug out the outhouse. By the time I finished Dan with the first pulk arrived. Hecand Pete started the woodstove. It was not long after the rest of the crew would arrive in waves.

Good times, good food was soon had. Both dinner and breakfast. Dan and I headed out soon after breakfast while the rest of the crew was staying an additional night. The hike back to the parking area took about half the time. Another great trip, I visited 2 new locations, camped at a new lean-to and re-visited an favorite. I still need to visit Preston with a canoe one of these days. With all the snow and ice, it will be a while.

Mid-week I was reading some old journal entries from Januaries past. I noted it was the ten-year anniversary of the trip Aaron, Rich and I did to High Falls in the 5 Ponds Wilderness. The 7 mile trail took us 7 hours to traverse as we were breaking trail. I suppose this could have been seen as foreshadowing for the coming weekend.

My weekend plans were to meet Justin at the Upper Works trailhead and follow in the tracks from George, Tammy, et al to Preston Ponds. On Friday night I recieved a text from George that they were heading in Saturday and that Bob +1 had to bail. Bob had twisted his knee on the way in. The plan was now to catch up to G&T probably somewhere on the "big hill". At 8am, I was about an hour from the TH and recieved word G&T were running late, and they would catch up to us.

At the trailhead, I loaded up my pulk with my gear and food plus the supplies left by Bob at the register. I waited for Justin. It isn't like him to be late; at least without warning. With no cell service here I was in the dark. At 9:30 Justin hadn't arrived so I figured his plans needed to change. I put his birthday present back into the car and headed up the trail.

The trail was well broken here as many use this as an ingress to the high peaks. After about a quarter mile, the ,junction would appear and I took the trai to Henderson Lake. Bob's tracks from yesterday provided easy going. The snow was deep and the rut from snowshoes, skis, and pulks testified to the depth. Once on Henderson Lake it was even easier on the flat surface as long as my steps didn't venture off the tracks. Every once in a while I would step to the side and appreciate the snow depth even on the windswept lake. Views of the surrounding mountains make this a favorite of mine in the winter. 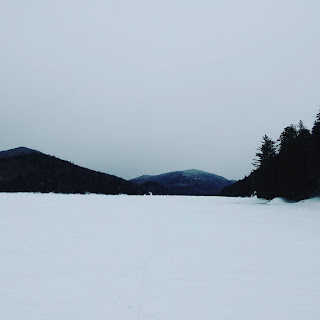 I stopped for some water at the lean-to. Even just the small rise from the lake level was tpugh. I was not looking forward to the "big hill". Onward following the tracks. The first log bridge was piled high with 3-4ft of snow. Bob had crossed the creek just downstream so I followed. The second bridge was uneventful. The 3rd was higher up from the water which could be seen through the ice. The snow was packed down by snowshoes to a 3foot depth making the top quite high above the water. I unhooked my pulk and straightened her out. I would be side stepping and pulling the pulk by hand. At the far side, there were no tracks. This must have been where they turned around I thought to myself. I made my way across, taking small steps then pulling the sled towards me, and repeating the process. Just after I crossed I noticed the tracks on the other side. Apparently they had decided to cross the stream at a safer point downstream. At least I wouldn't have to start breaking trail yet.

It was only about another hundred yards before Bob's tracks turned around. I stepped into the deep snow. This was going to be tough. Even with 30-in snowshoes I was pushing in 18-inches deep followed by my sled plowing through. Some parts were worse than others. Regularly I was knee deep. Quite often I would hit patches in which I was waist deep in the snow. The undulating terrain made some deep pockets in which I was basically swimming to get through. After another hour and only going a half mile, not even getting to the difficult section I turned around. It was already 1:30. At this rate there was no way to get to camp before it was late if at all.

I headed back towards the Henderson lean-to. Even with my own tracks ahead of me I was still sinking in. Barely 5 minutes passed and I ran into G&T. I relayed my story comparing it to the Russian Lake trip a few years back... but worse. Back at Henderson we took a break and talked about our plans. With no cell service G&T would need to get back to Newcomb to find out what other projects were still going on or drive home. I was going to stay here as I had no interest in driving back another 5 hours. Just then Dan appeared. G&T headed out, Dan and I made camp. We cooked sausages from Swan's and their red cabbage. Tried their currywurst for the first time. Very good. Slept well, warm. Restarted the fire and had a knockwurst for breakfast with coffee.