End of January weekend and Feb break. Skiing, snowshoeing and some cabin time. 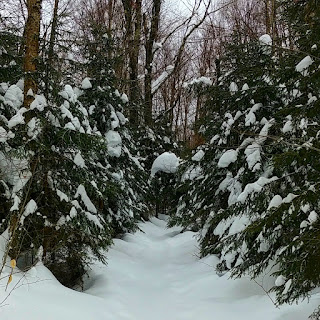 During the month of January, Emily and I had been exploring Darien Lakes State Park. On one of our day excursions we headed off the main snowmobile trail onto a lesser used trail. The snow was not quite deep enough for us to ski all the way. On the subsequent weekend Dan and I returned with  skis and pulks to explore more and camp the night at one of the lean-tos. At our parking area we spoke briefly with a group of scouts taking a snowshoe day hike.  Dan and I skied the same route in as Emily and I had done but with an extra week of snow it made the woods path easier going. We arrived at the lean-to and made camp. After collecting wood and setting up we headed out to ski some more. There are quite a few trails through the park, the mountain bike trails did not show on my map. We continued north to the gasline trail and then to the northern parking area of the Conservation trail (a spur of the FLT). We took that trail south towards the other lean-to. This hiking trail was quite windy and some of the ups and downs made skiing a tad difficult. One small spot in particular was crossing a footbridge on an angle. The bridge was lsoped such that if we continued straight it would lead us right into the creek. Hiking is no issue to take a 90 degree turn off the bridge, but skiis and downhill is another story. Of course right after it we had to go straight back uphill. Herring-bone style was easier than trying to not go into the creek. After stopping at the lean-to where apparently the scouts had made lunch we turned off the CT on a red marked bike trail (Shotgun Range Trail). Theis trail followed the ridgeline back to our main trail. As it was still early, we opted to continue on the Beaver Town bike trail to see where it headed. The bike trails made for some good woods skiing, except for the tight turns. As the daylight waned, we looked at the map to guess where we were in relation to other trails to determine whether we should go back the way we came or if a different route would be better. We decided to go a little further to see if we would intersect the main snowmobile trail which we did. This made it musg faster and more direct to return to camp. At camp we got the fire going, made dinner and relaxed. A lot of skiing would make sleeping wasy for me.

The next day we took a few hours to ski some more before we came back to camp and packed up our gear in the pulks to head back the two miles to the cars. From reading the shelter log it appears these trails can be quite muddy. I suppose skiing is the better option here.

For Feb break I had 3 nights to play with. While making my plans, I received a message from Andy that he was going to check on his new cabin. I changed my plans to camp in an area of the Adirondakcs which would make it easier for me to get to his cabin. Monday morning I headed out to the Gilbert Tract parking area on the Cranberry Lake 50 trail. This was a new section of the trail which eliminated some of the road walk from back when I did the trail in 2008. I found the parking area freshly plowed and the tracks in the snow were evidence it gets good use by skiers and snowshoers alike. My plan was to snowshoe to the Bear Mtn lean-to only 2.5 miles in and make camp. I had most of my gear in my pulk. The trail was wide and easy to follow having been packed down over the weeks. Stepping off the main trail the snow was very deep. After a mile I would depart the CL-50 trail onto the campground trail. There was some signs it had been broken out in the past, but the snow had all but obscured the tracks. Now I would be breaking trail. This section was quite pretty albeit rolling which made breaking trail with the pulk tiring. After just under a mile, I came to the junction with the Bear Mtn trail which was recently broken out. This was fortunate as I would be going up for the next half mile gaining just under 400' of elevation. I was tired and took many breaks for the last leg of my trip. Once at the lean-to and spent considerable time digging out the buried fire-pit and collecting wood. The latter of which was easy to find but difficult to carry in the deep snow off trail even with snowshoes. It was early afternoon and I hadn't eaten lunch so I made cooked some bratwurst over the fire. After my late lunch I collected some more wood and read the shelter log. As the sun slowly set, I would make some hot drinks to complement my colder ones. Both of which were satisfying enough that dinner was not necessary. The late luch was also a likely culprit. I had a nice relaxing evening by the fire. Out of curiousity I took my phone out of airplane mode and saw I had a 4G signal. Not a surpise considering I was quite high up above the hamlet of Cranberry Lake. I could hear the trucks on the main road from here as well as the snowmobiles cruising their trails. Tonight we were expecting a big snowstorm. It had been snowing ever so slightly all day. 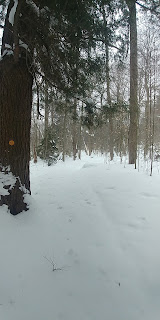 After a great nights sleep I awoke to 6 new inches of snow. The firepit still had some coals buried under a snow covered log. I coaxed them back to life and used the kindling I had hidden in my pulk from yesterday in anticipation. I made a hot drink and a hardboiled egg as i packed up my gear. After the snow, I expected to be breaking trail all the way back. At least is was generally downhill. The woods were very pretty with all the new snow. It took me an hour to get back to the main CL-50 trail. From here the tread was significantly more packed down albeit covered with the new snow. I wondered how much I would have to dig my car out. As I approached the trailhead I could see the parking area had not been plowed. The main road had however creating a a heavy snow barrier at the entrance. Glad I had my snow shovel , but not looking forward to digging a path through plowed street snow. Within seconds of me unhooking my pulk from my waist belt the DEC plow came and clearead out the parking area. I talked with the driver for a bit and thanked him. He asked about the snow depth conditions in the woods. I promised to contact the Potsdam office to thank them for the plowing as it may be a budgetary sacrifice. From here I would drive to Andy's cabin and then pulk in about a mile on the snowmobile trail to his camp and spend a few days here. On Thursday we would pack up and snowshoe out together. Thanks Andy for the invite and sharing your cabin. Awesome spot! 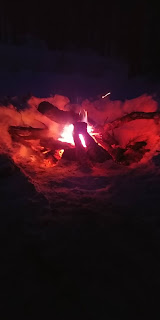