Silver Lake along the NPT

Except for the trips with Dan, many of my trips this year seem to have been solo. This would be no exception. With prospects of potential rain I changed plans to revisit an area I have not been to in a while. I was surprised by the number of cars in the lot at what was the old southern terminus of the NPT. I squeezed into the remaining spot and changed into my hiking clothes.

The trail was wet, not any wetter than from my memory of past excursions. I  tried to keep my pace slow. It was a bit muggy even though the temp was cooler. As I approached the W. Branch Stony Creek I noted it had a significant volume of water. This time I would be heading upstream to the bridge and not need to cross here anyway.

The designated campsite near the bridge was clean which was good to see. After crossing the bridge I went off trail exploring. Justin knows why. ;) After my off trail excursion, I took a bearing to the NPT and made a mental note of the bearing for future reference.

As I headed north on the NPT I heard the faint sounds of a chainsaw? This being a wilderness area I figured my mind was playing tricks, or it was coming from the private land. A few minutes later I hear it again; this time the sound was unmistakeable as was the direction. I continued down the trail to where two guys were using the saw to cut blowdown in the trail. They were clearing to ease the bringing in of their gear for their permitted hunting camp this fall. We hiked he next mile or so together until they caught up with two friends with much of their gear on a cart. I passed them by and continued on to he Rock Lake junction. They said their camp was somewhere in the Rock Lake vicinity. I took a break and had some lunch.

As I finished two other hikers came by from the north. We talked briefly. They mentioned a hunting camp up the hill. I do not think it was the same; but perhaps it was. They also mentioned it was wet up ahead. I had noticed the trail had some pools of water and mud. There must have been a recent rain. The crossing of the W. Branch Sacandaga required me to take of my boots. I don't recall ever needing to do that at this crossing in the past. The water felt good on my feet. 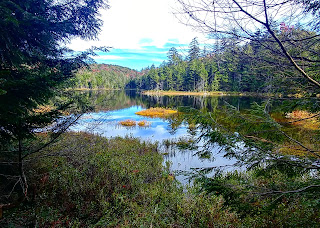 I soon passed by Meco Lake which is always pretty. Plenty of water flowing from drainages on the hillside for me to fill my water bottle too. The NPT never has a shortage of available water sources. Approaching Silver Lake I could see some people on the far side near the lean-to area which was my destination. The trail followed the shoreline until I came upon two guys at the satellite campsite. The lean-to was just up the hill. At the lean-to were two backpacks. I sat down on the log and flipped though the shelter log book. It went back to 2018. I did not see an entry for when Andy and I passed by on our thru-hike. Must have not taken a break here. A few minutes later two sisters came up from the lake. It was their backpacks at the lean-to. Nice ladies, we talked a bit about their trip and other past adventures. They were taking a break and heading to Rock Lake. I mentioned the group of hunters I had passed by earlier.

I set up my gear, gathered a bit of wood and some water from the lake. I did the usual take a break, gather wood, take another break routine. I talked briefly with the two guys at the nearby site. They were orginally from Idaho. I told them I was getting a fire going later and they were welcome to join me. Later two more women showed up. The set up camp behind the lean-to down by he water. I extended the campfire invite to them as well. 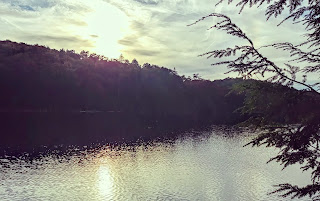 After dinner I did a bit of reading and put more wood on the fire to get it really going. I had kept it small for cooking purposes. I went to the lake hoping to catch a nice sunset. While it was nice to watch the sun lower across the lake, we did not get any special colors in the clouds. I headed back up to the lean-to and stoked the fire. As the sun got lower the two women joined me by the fire. They brought up their stoves and made their dinner. We had a great conversation about different backpacking trips and our current adventure. They were doing a section of the  NPT and were stymied at the river crossing due to dangerously high water so they had to backtrack. They then hitched a ride to where I started.

As the sky grew dark and the fire turned mostly to coals, the ladies headed back to their tents and I into my hammock/bivy in the lean-to. This would be #115 for those keeping count. As usual I was awake before the sun. Slept rather well. Made some coffee and contemlated what to have for breakfast. It was too early for  me to eat. I needed to prep my lunch anyway so I did that. I then decided to make that my breakfast.

Sunday morning and heading back to the car. The trail would be mostly downhill so the almost 8 miles would pass quickly. About a mile before the bridge I came upon the two sisters from yesterday. We talked a bit more before I continued on. Was back at the car by 11:30. Another solo trip but with plenty of company along the way.