Ice on the Lizard

This past summer I spent backpacking the Wind River Range in Wyoming. While traversing Lizard Pass, Dan and I were caught in a hailstorm. Last weekend Dan and I decided to visit Lizard Pond in the Adirondacks. My friend Justin visited this spot last winter. Since Dan had spent Thurs and Friday in the eastern adks, we planned on meeting at the trail register on Garnet Lake. As I made my way from Rt8 along the dirt rds, I came to an unplowed seasonal road. I had to backtrack and take a different approach. This made me about 20 minutes late. I saw Dan out on the ice as I approached. He had brought his skates and was making good use of the extra time waiting for me.

We unloaded our gear from the cars and loaded up the pulks. The sun was shining and felt warm as we made our way across the frozen lake. Out in the open a slight breeze reminded us it was still cold out regardless of the sun's warmth on our face. Mt Blue, our goal to climb after we made camp towered over us. Across the lake and to the narrows, the ice showed traces of snowmobile activity and led us straight to the trail to Lizard Pond. 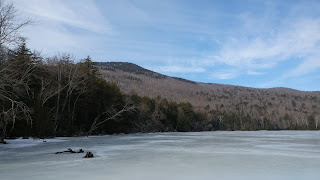 Once in the tree cover, the sun was partially obscured and the wind blocked. The sign gave us 1.3 miles to our destination. There was a little snow left, and a lot of ice on the trail. We made our way generally uphill. Near Lizard Pond the wetland area provided a better approach and the snow machines agreed. We followed their path avross the frozen swampy area to the Eastern edge of Lizard. Like Garnet, the windswept ice would make for good skating.

At the lean-to we made camp and I collected wood while Dan made use of the ice with his skates before the warming sun degraded the conditions. Dan joined me to collect more wood and then we made plans to climb Mt Blue.

With map, compass and day packs we crossed the icy lizard pond and made our way up to a ridge we would follow to the top. It started off steep, and then the snow disappeared on the southern facing hill. We removed our microspikes for a while but put them back on as the snow returned. Some steep sections with lots of deer sign. We reached a false summit and found a few overlooks. The true summit was farther than we thought as it was obstructed from our view on Lizard. As we neared it, a few drops of rain (or sleet) began. We were both thinking of the storm atop the Lizard Trail in Wyoming. At the summit, a decent sized cairn had been erected to mark it. We didnt stay long as the weather was eventually going to go against our favor. 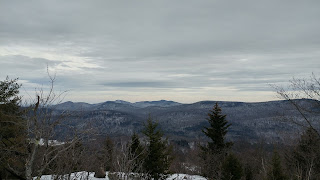 Took a general bearing and we followed the ridge down for a while until we turned more south to head back to Lizard. We arrived without much left to do except cook up dinner. I made jambalaya. Might have been a tad spicy for Dan. The rains began soon after it got dark.

I awoke first like usual and restarted the fire. We stashed kindling in the lean-to, and put a tarp over the woodpile. The rains had atopped in the middle of the night. The warming fire soon brought forth coffee and breakfast. The hike out was fast as it was mostly down hill on the trail and level on the icy lake.