Returned to Boucher Point for a short hike in camping trip. Andy was the first to arrive and I followed shortly after. He and I gathered wood, plenty for the day and night. Other trickled in and we had a good time hanging out, eating and drinking. The next morning, Andy I were both up before the sun. He made us coffee heating water with his alcohol stove. As the sky lightened, we could see the thiick fog over thelake. It was neat watching the rising sun slowly dissipate the fog. 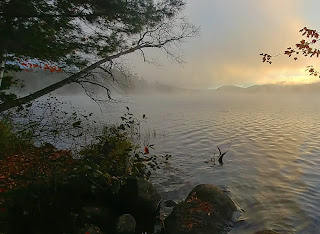 Jim used the morning light to capture some great photos and made a short video of our trip too.  I was happy with my one photo of the lake and fog. After breakfast we packed up the trash and headed home. Just an easy relaxing camping trip with good food, fine drink, and great friends.

With a 3 day fall weekend and needing to check on *my* lean-tos along ther Cold River it would make for a relaxing trip with some time to explore as weel as enjoy the last of the fall colors up north. With a few days before my departure, my buddy Dan became available so my plans changed slightly. Instead of my usual backpacking into the Cold River from Corey's Rd, we would paddle down Long Lake and then take the NPT the rest of the way in. Dan wanted to fish some ponds in the interior so we took my canoe and had his Hornbeck in tow. 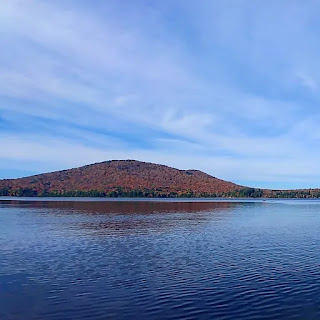 At the State boat launch, the parking area had a sign for "no overnight parking". Weird. How are folks supposed to spend a few days in the backcountry? The boat steward told us if we were camping on State land, it was ok to park overnight which he was told from the Forest Ranger. I wish the Ranger was there to ask myself. We loaded up the canoe and headed downstream (North) into a headwind. Even with the wind it was a nice paddle even though I was not in paddling shape. We passed Plumbley's Point and found a landing. We hid my canoe in the woods and ate some lunch. I found a path which would lead us to the NPT. Loaded up our backpacks; Dan also had his Hornbeck and we hit the trail. In a few miles we would find a place for Dan to hide his canoe for his exploration the next day. It had been a while since I was on this section of trail. Last time was me hiking Southbound with Andy on his thru-hike. The trail is much nicer in the fall although harder to see with all the leaves covering the tread. Low 60s makes for nice backpacking temps too.Soon after we hid Dan's canoe, we crossed a beaver meadow with a broken bridge. It did not seem familar to me. A few yards back into the woods the reason became apparent. The NPT joined the trail from the left. There must have been a reroute from the meadow being flooded and it has since dried up.

A lot of the NPT through here was on an old woods road. After returning from the trip[ I did a little more reading about this specific area. Back in the 60s there was another trail which went South to the ponds Dan wanted to explore. I will need to tell him about it when he returns from the remainder of his trip. We arrived at Shattuck Clearing which is growing in more and more every year. There are a few junctions here and I wanted to make sure we took the correct one. It also appeasr a new sign to Pine Point has been put up. I wonder if they crew also cleared the trail to it? Another future exploration. The old campsite at Shattuck with the picnic table was almost gone. A tree had collapsed the table and the firepit was almost completely buried in growth.

Two suspension bridges to cross over the next 3/4 of a mile and then to Cold River #3 which would be home for the next two nights. CR#4 was empty so we had it as a backup in case CR#3 was occupied. Early evening arrival to CR#3 (which was unoccupied) so we set up camp, gathered some wood and had dinner. I was not very hungry so I had my "small dinner". This is happening more frequently on my trips. We had a couple beers each (we had a ration of 2 per night). We could see headlamps upriver near CR#4, some hiker must have just arrived. Made it past hiker midnight and headed to my hammock. 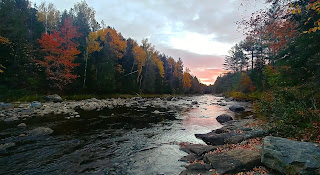 Was up before light, but I waited to for Dan since he was in the lean-to. Wehn I saw the flash from him starting the fire, I ventured over. The sun still hadn't risen as we both had a full day ahead of us. Dan got started earlier than I as his involved fishing not just travel. I had my breakfast (I made my "big dinner" and would have leftovers for lunch.) and coffee. Loaded up my pack and headed up river. I stopped at CR#4 and talked to the guys there briefly. On my way to the Seward lean-to, I ventured up a stream bed to check out the land since I need to explore off trail here more. There are all kinds of old camps and artifacts from the logging days around. Most are buried now under all the moss and leaves. Some friends have found some things sop I was looking for them. Not finding anything of note, I headed back to the NPT and to the Seward lean-to. The lean-to was clean but the log book was gone... again.  I will need to return with a new one. Check on the privy which we dug and installed 1.5 years ago. Already starting to get full. Between replacing the book and digging a new hole, they are good excuses to return sooner than later. I was making great time and not even trying to hike quickly. The day pack weight helps for sure. I headed to Ouluska; crossing Seward Brook was an easy rock hop as the water level was low. The log book was gone here too. At least the folks are respectful of the old transcribed books covering multiple decades. A few sheets of paper have been added which people have been using as an od hoc shelter log. I noted Carly and Danielle stpped here earlier in the day for a snack break. One of the phrases she used was familiar. I think I know which Danielle this is. Will try to remember to send a msg when I get home.

Had my leftovers for lunch and checked on the privy. Will need to dig a new hole here too. As my friend Chuck used to say "camping with a purpose". It was barely past noon and I had taken a long break. I had some time to do more exploring on my return to camp. I chatted with the guys from CR#4 again while they were taking a break at Seward. I then checked out another drainage looking for an old camp. I walked around quite a bit looking in areas which would be "camp worthy", and then it dawned on me that I was looking for a camp which hasn't existed for over 70 years. The growth and trees would certainly be different. So I looked for an area with a lot of growth... the last place I would choose to camp in this century. As I poked around I found some old cans and bottles in the moss. Some remnants from box stoves and more trash. Very cool. Not really much to see, but glad I found it. Reminded me of when I found the old camp on the Stone Dam trail many years ago, it was all overgrown too. Odd that I didn't remember this while I was searching this time.

Back at camp by 3:30. Plenty of time to take a bath in the Cold River... aptly named this time of year. I also put our remaining beers into the water to cool them. I made an earlier dinner so I would not have to eat in the dark. Dan arrived before the sun went down. He was abit later than I thought he would be due to missing the cut-off trail at the NPT reroute and therefore swing around past where he hid his boat. It took him an extra hour to locate it. I was tired, so went to bed not long after hiker midnight. 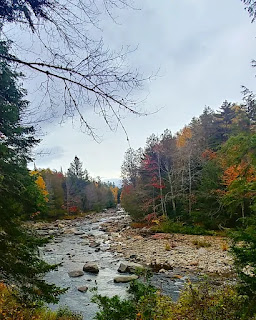 Monday morning I again awaited for Dan to get up. We only had to pack up and head home. Uneventful morning before hitting the trail. We passed by the NPT reroute and here were figured out Dan's mishap. He picked up the Hornbeck and we headed to Long Lake. A bout a mile before we stopped and gathered a large bag of honey mushrooms. The canoe was right where I left it. I admit I was a little nervous about leaving it for two nights. The lake was calm and it was an easy paddle. Dan trolled a bit with no luck. We stopped at Rodney Point for lunch and were back at the launch by 2:30. As we approached we paddled past a motorboat towing a dock. These folks take their dock completely out for the winter. The boat steward was finishing his last day of the season. Cars did not have a tickets, nor were they towed. I will contact the forest ranger when I return to ask for verification on the parking issue. With a few hours to drive I will get home after dark. Dan is heading to Lows lake to do some more fishing for the rest of the week.

post-script: I contacted Danielle and it was indeed her. They were hiking the Loop as an overnight.