After the windstorm Wednesday, which knocked down numerous trees and took out power to much of the Rochester area I headed back to the great north woods.

This was supposed to be a meetup trip to Chub Pond, but everyone bailed due to the forecasted subzero temperatures. Undeterred, I changed the location to Nelson Lake to be my solo destination. A few years ago I helped Lean2Rescue ferry logs across the Moose River upon 2 canoes lashed together as a barge. The following weekend, a different group completed the build. This would be my first time back.

There was a small plowed area at the trailhead a few hundred yards before the parking lot. I loaded up my pack and hiked down the old road past the parking area and up to the railroad tracks. At this point, I would turn north on the tracks to parallel the Moose River on unfamiliar trail. As I crossed over the trestle bridge, I spotted the trail to the right. I would climb a bit, and then turn back South. The markers ended at an old woods road which was easily followed. Signs of trail maintainance were visible as well as snowmobile tracks. Rejoining the river on the opposite side, I was back to familiar trail which turned East. Not long after did Nelson Lake lean-to come into view.

I set up camp, and gathered firewood. It was less than an hour to get here, so I had plenty of time to relax. Which is what I did. Like usual as the sun set, so did I. The full moon rose directly in front of the lean-to and its light reflected off the snow. The night was bright and cold.

I was up before dawn. The hole I had cut in the ice for water had refrozen. Made some cocoa and watched the sunrise. Soon after, I packed up and made the short hike back to my car. No great adventure, just a quiet night in the woods. 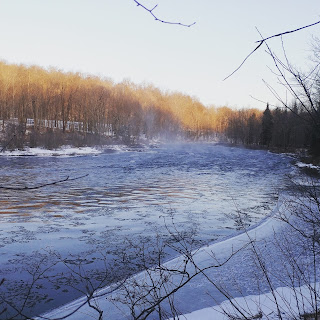