Original plan was to hike w/Steve on the FLT, however he had to cancel due to a pinched nerve. Plan B list was consulted as well as contacting other hiking partners. Shannon, from the defunct meetup group was available for Thurs-Sat. She is in Syracuse area, so I hiked and camped in Morgan Hill SF on Wed. Thurs morning drove to Shannon's where we officially met. The meetup has closed before many trips occured so we never had the opportunity to meet in person. Both of us are trip leaders/organizers for other groups though. We had settled on the trails in the Black River WF. This is an area I was quite familiar with, though haven't been to in a long time.

Shannon drove us to Woodgate and we started hiking under the blue skies. A slight chill in the air and a few patches of snow remained. We turned down the trail towards Chub to take the long way to Gull Lake. After a short visit at Gull we continued to Millbrook and followed the snowmobile path to Woodhull Lake. Along the way, the path had large areas of packed snow and some mud pits. About a half mile before Woodhull, one of these ice patches gave way and I slid with it into hip deep water. I am not sure how I was able to get up and out so quickly. Glad it was a warm day, my clothes would dry before I even arrived at Woodhull. There was still ice on the lake and large patches of water. The wind was kicking up some waves on the open water. We set up camp in the double-wide lean-to. The snowmobilers had left a considerable amount of split cordwood. What a treat. As I built the fire I recalled the lean2rescue trip to here. This was the spot where we met Dan. His rowboat motor had conked out so he joined up with us for the rest of the weekend. Now he is a regular adventure partner of mine. Certainly a lot of our trips I would never have done if it hadn't been for the chance encounter at this lean-to. 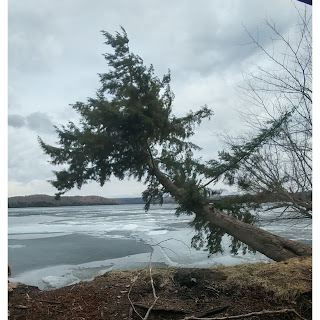 We had hiked just around 11 miles for the day. Some of the trails I had done multiple times, others only once or twice. This would be the first time sleeping in this lean-to. Counting my Wed night stay at the Hemlock Glen lean-to, this would make #75. The fire was burning hot, fanned by the wind fortunately blowing parallel to the lean-to. The waves were grinding away the ice. I commented there might not be much left in the morning. Soon after dark, we were in our bags and drifting to sleep. The (almost?) full moon rose illuminating our campsite, the fire died down but would reignite with the wind. By morning, the winds had calmed. I arose slowly and quietly so as to not disturb Shannon, who likes to sleep in. The sky turned from the pre-dawn reds to the sun shining directly into the front of the lean-to. I had to put on sunglasses to make my coffee. The lake was now ice-free. I do not know why I am so enamored with camping by a lake to witness ice-out. Perhaps because the unplanned nature of being there for those final last moments. Or maybe I am just weird. 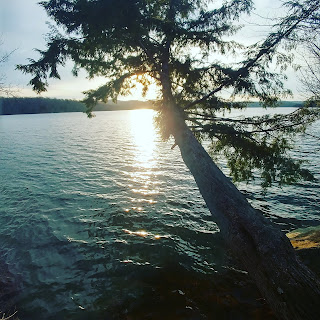 Thurs was to have been the nice day of hiking as the forecast called for rains. It was warmer now, the winds bringing in a front or pressure system. We packed up and hiked to Bear Lake where we visited the lean-to. We coninued to close the loop and made our way back to the snowmobile path. We had a snack at the roadside spring. So far a bit over 4 miles and the weather was holding out. It was overcast, but warm. Passing again through Millbrook we turned down the Sand Lake Falls trail. A lot of mud pits along the first half of this 3.8 mile trail. As we began the descent towards the lean-to for the last mile or so, we felt our first sprinkle. Donning pack covers, we arrived at the lean-to and raging falls with just a bit of light rain. This would stop/start from the afternoon through the evening. We gathered some wood during the dry moments, and took the short walk to the beginning of the cascade. We started a small fire just to get a good base going before (if) the rains developed more fully. We played some card games and chitchatted. I had a small dinner. We were curled up in our bags before dark. The rains did eventually come off and on. By morning all that was left was like a falling mist. 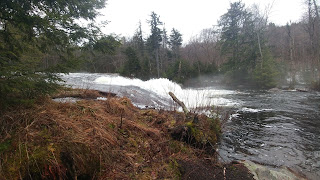 By the time we were all packed up, the rains had subsided. We retraced our steps back up the snowmobile path to Millbrook. We turned off Bear Creek road and took the northern loop. This was wider and wetter than I remember. The undergrowth, still wet from the rains would transfer its moisture to us as we pushed through it to avoid the deep mud pits and vernal ponds. The last mile before the junction was high and dry. Back at the car before noon. It was great to revisit some old stomping grounds and bring back some good memories and to share the area with a new hiking friend as well. Hopefully we will have more opportunities to hike together in the future.
Posted by DuctTapeADK at 6:51:00 AM No comments:

A few little adventures on the FLT.

A few weeks ago I needed to get out and camp. I had spent a night in my backyard campsite but was itching for a little more. After consulting my maps, I chose a new spot in the Burt Hill State Forest. I parked on the roadside shoulder as is common for FLT access points. The trail began following the edge of a farmer's field and the entered the woods. Remnant snow in the field and a ice in the woods. The trail quickly descended into a ravine with a creek. I rock hopped the icy creek and ascended the other side of the ravine. The trail register and lean-to were both on the far side. A quarter mile hike to camp. I collected wood, set up camp, cooked lunch, read a book. It was a great day to be in the woods. Across the ravine I could see the blades of two wind turbines. During the quiet of the night, I could hear their dull roar. Coupled with the creek, this made sleep easy. Hiked out the next day. I probably hiked more collecting firewood than the hike in/out, but it was a great way to spend a weekend unplugged.

Two weekends later I led a group of new backpackers into the Pharsalia Woods. We hiked in about 3 miles. The goal was to allow these experienced hikers a chance to test out gear and acclimate to backpacking. All have a desire to hike the NPT in the coming years. This was designed as a relaxing, experience, and knowledge gathering trip. I had Bill C., also from the NPT Chapter with me, as well as Dan. We all shared tips and tricks. I asked Dan to demo how to hang a bear bag. The post-trip survey indicated this was a highlight. We took the long way out to loop back to our cars. Everyone had a good time, and is excited to take the next steps to prepare for their adventure. 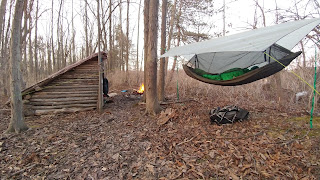 My Backyard Campsite
Posted by DuctTapeADK at 8:42:00 AM No comments: