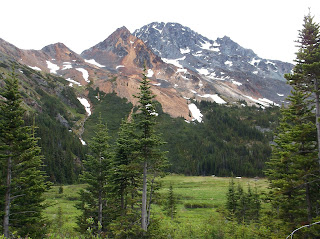 My friend Martin has some family history in Smithers, British Columbia. His family had owned a sawmill in town and some silver mines in the mountains nearby. He was going to see if he could find them and I asked if he wanted company. It worked out that our schedules would allow me to join him on this excursion. I met Martin in the Vancouver airport and we traveled the last leg together to Smithers, BC. We were both amazed at this thriving town in the middle of nowhere. Stepping out of the airport, we were immediately greeted by a view of the mountains.

It was late, but still plenty of daylight. We were a few days beyond the summer solstice, which means we would have only about 3 hours of darkness each night. Checked into the hotel, and then drove around the small town a bit and picked up some last minute supplies which could not be taken on the plane. We headed towards the railroad which is near where the old sawmill was supposedly located. We noted a very old building on a side street. We had an appointment with the folks at the local museum to help us out with some locations and other information.

Friday morning we waited for the museum to open; the people were extremely nice and although they did not know the location of the sawmill, they had an idea of who would know. Since we were heading up into the mountains, they would send us an email with the information.

We drove up to the mountains and parked at the main lot which had about 3 different trails emanating from it. Hoisted our packs and began the long slow climb to the Silver King basin. The trail looked to be used by vehicles in the not so distant pass. The trail increased in its roughness and in elevation. We stopped numerous times to take breaks since we were in no rush. It was only about 9km to the Basin. Along the way, glimpses of the mountains would enter the break in the trees in the trail ahead. 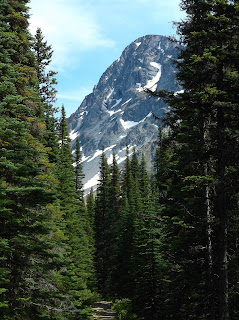 It wasn't long before the trail opened up into the Silver King Basin. We would cross a footbridge over the outlet of an alpine lake on our way to the head of the basin. This is a popular area, and the community came together with local businesses to construct a cabin for visitors to use. It is often filled to capacity. So far we were the only ones here. 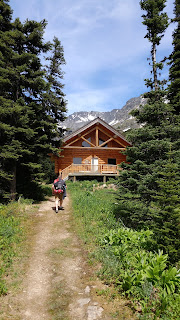 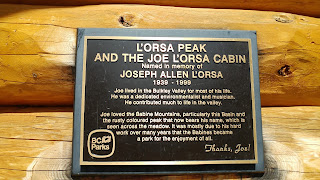 We unpacked out gear and went exploring. It was early afternoon and we had 8 hours before it would get dark. About 1 km past the cabin was the entrance to the Silver King mine. Artifacts from the operations were still here although the entrance to the mine had been closed. After exploring the immediate vicinity of the mine entrance and looking at the old mining cars and rail lines we climbed up above the collapsed entrance in search of vent holes. We didn't find any, but as we climbed we were greeted by a waterfall cascading down the mountain. We could also see across the way to the trail leading up Hyland pass. 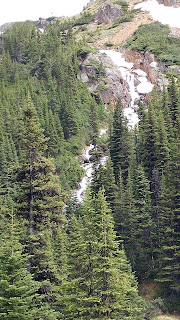 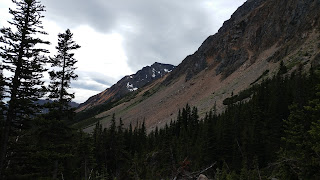 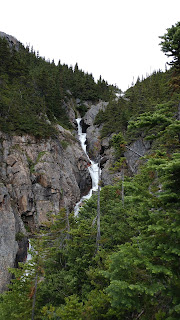 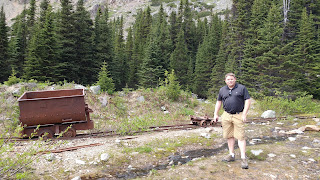 We headed back to the cabin to plan out our next few days. A few others had since "checked in". We looked at the time and decided to head up Hyland pass for a half hour then turn around and come back to make dinner. We grabbed our day packs and headed up. The pass began along side a small stream and we crossed it a few times as well as some snow patches. After 40 minutes it looked like we had a lot, and the climbing was steep. Martin said we already got this far, let's just finish it. The trail turned a bit and began to switchback up the slope. The trail became more open. Great views of the basin would could be seen as we were now well above the tree line. One of the other guests came running down. He had just run up the pass. Soon another couple were on their way down and they told us of an alpine lake not far ahead. The terrain began to level out a bit, but we could see we had another significant climb ahead of us. At this alpine meadow we could see down into a small basin to the lake filled with the snow melt. The trail would become loose scree in places and it was quite steep. I though perhaps we had taken one of the ski trails accidentally after going off the trail to view the lake. Martin went ahead a bit to see if the trail did indeed turn back towards the saddle. It did, so I caught up to him and we pressed on. As we approached the pass, the winds began to pick up. The pass is through the saddle between the two highest peaks in the provincial park. The saddle is still quite high, only the ridge and technical portions left to get to the summits which we would not do. We didn't go down very far through the pass since our 30 minutes had passed over an hour ago. So we turned around and headed back down. It took us 1:40 minutes to climb to the pass, and 50 minutes to get down. I would cook dinner and we joined the others by the firepit. 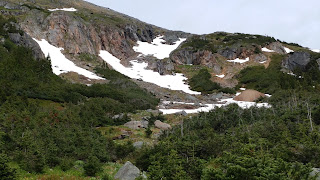 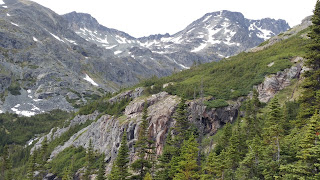 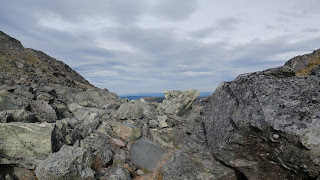 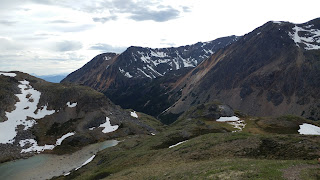 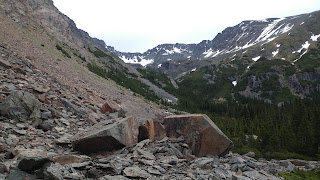 The next day we would explore a little bit more and then head back to Smithers. We had gotten information from the museum folks so we went to find the sawmill. While poking around in the brush, Martin walked through a bunch of stinging nettles while wearing shorts. I could not locate any jewelweed in the vicinity. We tried to get some benadryl cream at the pharmacy, but all were closed as it was Canada Day. Back at the hotel, I gave Martin some benadryl pills which he crushed up and mixed with some lotion to create a salve to provide some relief. we had dinner and drinks at the bar. Another gentleman was there who happened to work in the mining industry; gold and copper specifically. He wasn't just a miner, he founded the company.

Anyway, the museum had given us the number of the town historian, so we gave him a call the next day, and he met us near where the old sawmill was located. A few minutes poking around int he brush and we found some old footings and a metal pipe, it looked to be for exhaust smoke. Apparently the sawmill was steam powered. martin was glad we were able to find the exact location. To celebrate we hiked up a well groomed path to the twin falls which are sourced from the glacier up on Hudson Bay Mountain. Too bad we didn't have time to climb all the way to the foot of the glacier. Perhaps another time. The Babine Mtns are beautiful. while Some of the photos came out nice, they really could not capture the depth, size and scope of the basin and the mountains that surround it.