This weekend was the annual meeting for the NPT Chapter in Long Lake. So as to get to the meeting on Sunday morning I chose to camp at a lean-to situated not far away. Before getting to camp I did a short day hike up a small mountain on the drive up. I had passed by this trailhead many times en route to other locations. This trip gave me the opportunity to rectify the oversight.

While not a challenging mountain, only about a mile to the top, it did have some nice views and exposed rock. It was also quite busy. By the time I got back to my car, the lot was over capacity. 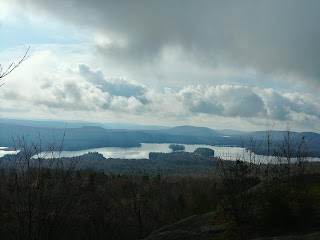 I then drove towards Forked Lake. The lean-to is located just downstream from the falls. Actually two lean-tos. I set up at the nicer of the two and collected a bit of firewood. Spent the day reading and cooking. Made a nice skillet stew. I did not stay up too much past sunset. I was up before the sun as was the rain. I packed up and headed out as the sun was rising to get to my meeting. Love these sit around and relax trips sometimes. 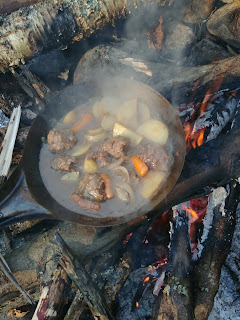 Fishing, not catching at Stony Ponds

Drove to Dan' s where we loaded my gear into his truck along with the deer he harvested the days prior. We dropped off the deer at a friends who has a giant walk-in so as to keep the deer cool and safe while we were gone for the next 3 days. Next stop was the McGuire's where we picked up a hornbeck canoe for me to use. A few more errands and we were on our way to Stony Ponds. These were the ponds we visited by snowshoe earlier in the year. This time the water was not hard, so we would seek out the brook trout population.

At the parking area we filled in the remaining spots as there were quite a few cars. We were not surprised to see cars, but the total number was not expected. We carried the canoes the 2+ miles to the ponds where we encountered a large family gathering. Apparently this family has been hiking to this spot for over 50 years. The eldest, now in her 80s has made the hike every year. The large extended family seemed to be broken up into a few smaller groups. A few were grilling some food near the fire pit. Others were hanging out by the water. As we set up at the lean-to, the family gathered together for a photo. A little while later they headed out.

We had our gear and food stowed, so we pushed the canoes into the water. It was quite shallow for much of the pond. Dan and I explored different areas. I found a deeper area near an inlet at which I landed a small 8 incher. That would be my only fish for the weekend.

Dan paddled over and we both fished the area with no more hits. So we headed back to camp to make dinner. One of our favorite dinners is venison stroganoff with green beans. Like usual we had leftovers which were sealed into a tupperware and hung with the rest of our food. We did not stay up very late. Probably due to both of us waking up at 5am. The night was a tad chilly around 2-3am. Which was expected. Also the near full moon had the forest all aglow.  Both of us were up at first light. Not that is was really any more light than what we had from the moon. 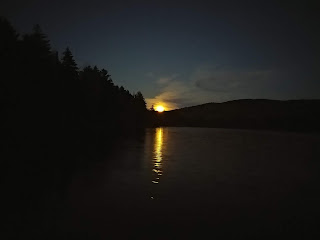 We made coffee and had granola for breakfast. Today would be spent fishing and carrying the canoes to other nearby ponds. We packed up our gear including snacks and dinner leftovers. Out on the water was nice. We explored different areas of the pond as we headed towards the inlets which came from a nearby pond. This we visited on snowshoes last winter. We carried the canoes up to the next pond, but pushed on up the trail to the next. Up and over a ridge. This was a tiny pond. Extremely shallow. One spot had a deep area. Dan caught a few small fish here. We had our leftovers for lunch and then headed back. At Stony, I opted to continue fishing while Dan headed to another pond. Neither of us had any luck.

As it was getting closer to dinner, I headed to shore and readied the fire. It wasn't long before Dan returned. After dinner we both did not stay up very late. It was warmer this second night. We made eggs florentine for breakfast with mushrooms and cheese as well as camp bread. A man and woman came by, also with canoes. Dan talked to them a bit while I finished making breakfast. Since the fishing wasn't great we left soon after breakfast. Was still a great trip. The sky changed the scenery throughout our 3 day stay. 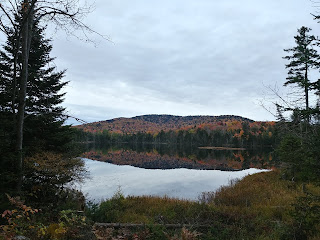 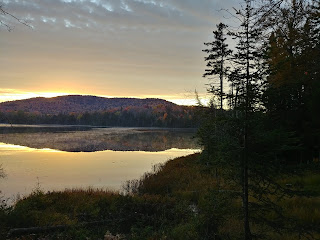 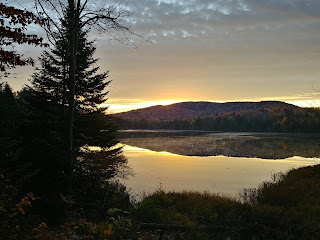