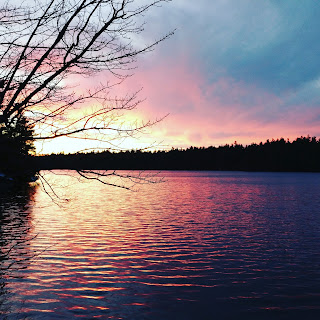 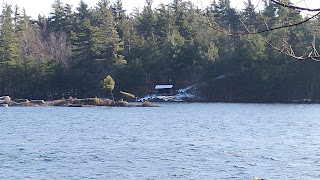 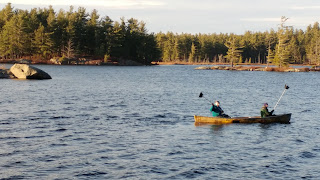 My annual Adirondack Thanksgiving trip ended up just outside the blue line in the Wolf Lake State Forest. This little gem of a forest is located near Potsdam, NY. Most of the state forests are reclaimed farm land, and this was no different except for the fact that it also contained 3 decent sized ponds and lakes. Eric and I arrived Thursday morning to a very crisp day. The 2 and half mile hike in to our goal at Huckleberry Lake went quickly. The trail started out on an old road and then a well defined footpath. The register box was located a half mile in at a swampy section now flooded by beaver activity. The trail went around the water and markers seemed to be rare. We headed uphill towards huckleberry and then skirted the lake high above on a rocky ledge. The footing was slick, and the dropoff into the lake was at least 30 feet. Skim ice was already starting to form.

The lean-to was soon reached and we set up our home for the next two nights. Gathered firewood and ate lunch. The day was mostly spent gathering wood and sitting around the fire. The lean-to was located on a rocky outcrop. If there was a lot of wind and rain, the site would not be great. The forecast called for cold, but otherwise favorable until the last day. We both fell asleep early since we had left before the sun came up. I arose the next morning just as the sky was again getting light. It was a chilly night but already one could tell the day would be warmer than before.

We were expecting Kalie at some point today. We had saved our thanksgiving meal for when she arrived. Eric and I borrowed the stashed canoe (it was left to fill with water) and paddled around the lake using brooms as paddles. The wind had picked up a bit, so we used it to our advantage and then the islands as a wind break as needed. We snacked on the far side of the lake at a fishermans camp. The lake here is beautiful, a lot to enjoy. Apparently good fishing too. Back at camp we awaited Kalie's arrival and gathered more firewood. After kalie arrived, we cooked up our turkey, stuffing and gravy and had a great time eating and drinking. It was significantly warmer today. Eric and Kalie took the canoe out for another paddle. As they were getting back to shore, eric fell in the water exiting the canoe. Good thing it was warmer today. Eric got out of his wet stuff and got into his sleeping bag to warm up. We stayed up as late as we could.

I did not feel like making a real breakfast the next morning. We sat around and slowly packed up. Reading the shelter log, an entry described a shortcut for bringing in kayaks. Interestingly it was made by the same people whom Eric had run into this past summer when he first visited and suggested the location for our thanksgiving trip. The weather turned south on us as expected, so we sat around waiting for a window with less rain. When it finally arrived we headed out.

I had bounced around a few ideas of where to go this weekend. I finally opted to check out the DeBar Wild Forest and climb its namesake mountain. My friend Andrew was available to join me. While discussing logistics, I reminded him it was exactly a year ago we had done the trip to Long Lake. He said that fact was not lost on him.

I stayed up way too late and the early rise to meet Andrew at 5:30 gave me less than 6 hours of sleep. I would certainly sleep well at camp. We were on schedule for driving and stopped at a diner in Potsdam for a quick bite. The almost 5 hour drive went relatively quickly. We entered the Meacham State Campground to find it deserted. That was expected at this time of year. Next to site 37 the dirt road had a sign with an arrow for parking written on a paper plate. We started up the road, and soon backed up as it was getting rough. We parked at the campsite and walked the extra few hundred feet. We were there to backpack, and the mileage was short to begin with. The old jeep road was a gentle grade almost entirely uphill. The woods were quiet and open. The only sounds were us and babbling of the trail side creeks. Andrew had been getting his pack weight down and was comfortably ultralight especially as I had the majority of food (and beverage). It was only a few miles to the lean-to where we would make camp before the significant climb to the summit of DeBar Mtn. I checked the map periodically to gauge our progress and it wasn't long before we arrived. The lean-to was in rough shape. The deacon seat was half gone, the shelter was full of leaves and we both wondered whether the roof was watertight. We had tarps, so we would stay dry regardless. The forecast called for rain early in the morning and then throughout the rest of the next day. I put that thought out of my mind and enjoyed the current beautiful fall weather.

With our packs mostly empty of our gear. I noticed someone had written on the lean-to, "Big Fuckin Hill". We laughed. The mountain was clearly visible ahead of us with all the leaves being gone. We could see where the hardwoods switched to conifer at the upper reaches. Starting up the trail, pausing to fill our water bottles at the stream and noting some relics at the foundation from the old caretakers cabin. It was steep, real steep. The rocks were wet, and often covered with leaves. My pack felt extremely light with most of the contents gone. I ascended ahead of Andrew, pausing to look every once in a while. Of the many breaks, one was in the middle of a section of birches. The were short here, obviously stunted from the wind and other weather factors. As we left the birch section and entered the conifers with the frost still on their needles, the trail increased in steepness. Soon we were at a relatively new slide. The views behind us really accentuated our elevation gain as the lake in the distance now began to appear well below us.

Beyond the slide, we needed to use the trees to help us climb. Eventually the trail began to level off right before the final push. The bald open area where the firetower once stood was just above us, and we had to wind around it on a bunch of herd paths to get to it. From there a grand view presented itself. We had expected it to be colder at the top. Our sweaty shirts still made it necessary to put on additional layers, but it was not as cold as expected. There was a nice rock to sit on, so we took advantage of it and rested for a while. Took some photos, had a beer, and talked. When we left the car, we decided to not talk shop while in the woods, but we found ourselves there anyways. It was neat to see the areas of the Adirondacks that I usually visit from this vantage point; looking south and down. 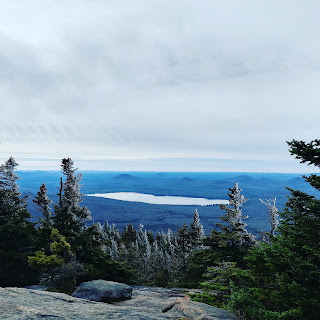 On our way back down the mountain, we passed by a woman who was resting at the slide. She asked how much further up. It appeared she was just day hiking the mountain. The hike down while not as strenuous was still tough. Mostly to ensure we did not slip. At camp we collected a bunch of firewood. There was plenty to be found. It did not appear many camp here. We got a fire going, made dinner and ate like champs. Night came early and we were tired, so into bed we went.But not until the fire was stoked up and dry wood placed under the lean-to.

Rain was expected in the wee hours of the morning and throughout. I did hear a little rain, but the wind was most prominent. At about 4am I could see the fire was still glowing. The wind was continually keeping the ash from covering the coals and the extra air was extending the coals life. I got up to heed natures call and placed some of the unburned stubby ends onto the glowing coals. It did not take long for the wind to blow the small pile back to life. Andrew mentioned later he awoke to see the small fire ablaze.

As this weekend coincided with the clocks changing back, we had extra time in the morning. A few sprinkles came down here and there, but it was dry for the most part. The clouds were parting just enough to give the sunrise some nice colors through the trees. A leisurely breakfast with two servings of coffee followed by an unexpectedly dry hike out. We cut some branches off a blowdown on the way out. Passed by a hunter and two hikers on their way in. Back to the car and the rains came soon after we started driving. The timing was perfect, said Andrew.