Five Days in The Pharaohs

The past few years I have been been doing my post xmas trip with Dan. I wanted to go back to the Paharaohs to check out a few more of the lean-tos but Dan has recently done a lot of exploring in the Pharaohs. He wanted to wait until spring to go nack for lake trout fishing. So my plan was to be a solo trip. Seems like quite a few of those this year. I let some friends know of my plans and as it turns out a couple joined me for part of my trip.

Day 1. 12/26 Campground to Clear Pond Lean-to. I parked next to Justin's truck leaving my snowshoes in the car. The trail would be somewhat familiar as it was the egress from last year's trip. I signed in oat the register and made my way to the first junction. I was taking it slow not only because of my pack laden with 5 days of food and winter gear but so as to not get to sweaty. The latter proved futile. The just under 2.5 miles was rather easy going, made even easier following Justin's tracks in the 3 inches of crusty snow. I arrived at the lean-to a little later than Justin expected. He had already gathered quite a bit of firewood. I took a break and added to the pile. Had a lunch break then gathered more wood. We had ourt usual great time together in the woods with a nice hot fire and cold beverages. The temp was forecasted to be in the low teens overnight; also was expected to be the coldest of the four nights. I slept soundly, toasty warm under my quilt in the lean-to. Justin had his tent pitched nearby. 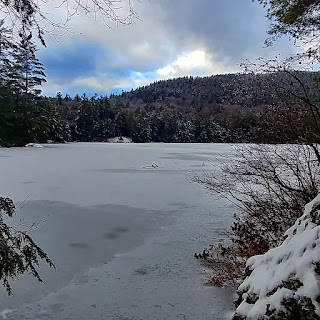 Day 2. 12/27 Usually Justin is awake before me. I was glad I was up first as it meant he slept well. I restarted the fire with the remaining coals and made coffee. We took our time in the morning with packing up and breakfast. It was close to 10:30 before we set out. Justin would hike with me for a short ways before he headed back to his car. Due to his generosity, I still had my full complement of cold beverages for the remainder of my trip.At the junction Justin mentioned the hill would be my big climb for the day. I only had a bit over 4 miles to do for the day. My destination would be Tubmill Marsh Lean-to. Justin's intel about it getting little use bode well for easy firewood procurement. We said our farewells I headed North up the hill and Justin turned South back around the far side of the pond. I continued my slow hiking pace as I was in no rush. At the far side of the hill I would again be on familiar trail for the next couple of miles. I would pass by the waterfall which dan and I had paused at last year. Between Rock and Lilypad Ponds some blowdown obscured the path for a moment and since I was creating the only footprints int he snow besides the deer, squirrel, coyote, etc... it took a moment to get around it an re-aquire the path. Was neat to see all the different animal tracks and other signs. Once at Lilypad, I took a break and had a snack for lunch. I was already way ahead on food, having not eaten my dinner the first night. A weak cell signal here so I texted Emily to let her know I was ok. A c ouple of hikers came by from my direction of travel. Perhaps I would have some footprints to follow for a bit. At the next junction I headed towards Honey Pond the rocky downhill which Justin had described. The Rock Pond brook required some creative rock hopping to stay out of the water. After the crossing I expected the lean-to to be just downstream. The trail headed up the hill and around. I wondered if the lean-to was off a side trail and the sign had been removed. I was tempted to bushwhack down the hill and follow the shore line. I didn't, and gave myself a little more time. I figured I could always turn around. A minute or so later I could see the shape of the lean-to in the distance. The trail was still headed a few degrees away from it. Staying on the path, the sign and access trail was soon visible. As expected, firewood was plentiful. I gathered enough for my own use and enough to leave for the next visitor. I made an early dinner and read the shelter log book. Had a few of my cold beverages, saving a few fot the next night. I made it past 8pm before I was in bed. Another sound sleep. I could get used to this. 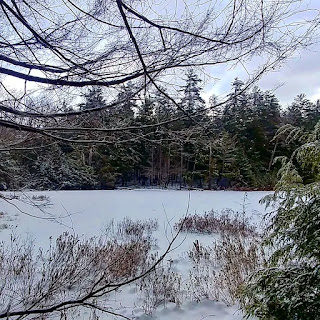 Day3. 12/28 The woods were visible in the early morning light while the back of the lean-to remained dark. The light eventually pulled me out of my warm sleeping quarters. Was a chilly morning. I restarted the fire and made coffee. Another short day; just over 3 miles so I was in no hurry. After breakfast I headed back the way I came towards Lilypad. Uphill of course. Nice way to warm up. At rhe junction I sent another text to Emily and also to Tony to let him know I was still on schedule. The next portiomn of trail brought back the memory of when Dan and I dropped our packs and did a quick hike up tto the top of Pine Hill. Both HorseShoe and Crab Ponds were familiar though I had forgotten about the steep section between them and the waterfall. I paused at the waterfall for a snack just as Dan and I had done last year. I had been following the footprints from the hikers but they went off in a weird direction SE of Crab Pond. I speculated they had climbed Treadway Mtn and then bushwhacked down the far side. I passed by the campsite and nodded to the bench. I planned on stopping here for my break but the waterfall was only a few minutes ago.  After Crab Pond it was an easy downhill draw to Oxshow Pond. As the day warmed, the snow became sticky; clumping up on my micro-spikes. AMde the last bit slightly annoying. I expected collecting firewood here would not be as easy, so it was good it was bearly noon when I arrived. My initial plan for this trip was lower miles between campsites to give myself time to do day trips w/o a full pack. Later morning starts, slow walking and wood gathering limited the time to explore too far away from camp. At Oxshoe, I think I walked an extra 2 miles gathering firewood as it was. The shelter log book was brand new, so only the adopter's initial entry to read. I added my own. Had a later lunch and went to gather more firewood. Found a sping while collecting wood, so no need to melt more snow. The winds were a bit more here. Possibly a result of just being closer to the water's edge. I do not think I made it to 8pm before I was in bed. 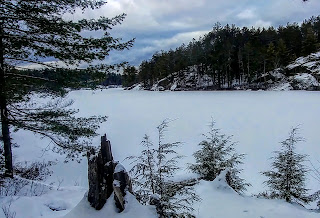 Day 4. 12/29 Another great night of sleep. I have slightly more than 4 miles to Rock Pond with a schedule to arrive before noon to meet Tony O. Based on my pace I wanted to be on trail close to 8am to give myself plenty of time without rushing. I used my stove to boiil water for coffee and an easy breakfast to save time. I filled up my water bottle at the spring and was on trail not long after 8. Back up the gentle hill to the junction re-tracing my steps to Lilypad where I did another text check-in with Emily and also let Tony know I was still on schedule. It was colder than i thought, I had to put on a layer during my break. I was just about halfway to Rock Pond lean-to. I figured I would get there around 11am with the easy pace. The last quarter mile or so would be the only time not following my old tracks. Upon my arrival, IU swept out the lean-to and set up my gear in one corner. I was only here about 10 or 15 minutes before Tony arrived. He re-supplied me with some cold beverages; much appreciated. Even better would be the chance to hang out with Two-Ton again. I wonderied if we had even seen each other since the trip when Rob &I met him and Sdam on the NPT. Tony reminded me we were both at Paul's winter camp; which was still quite a few years ago. Was great talking and hanging out. Had to travelk even farther for wood gathering, so this took up some of our time. Among all the great coversations we decided we needed to plan a trip instead of just waiting for time and schedule to allow it like this one. We also want to try to plan something with Justin and hopefully the 3 of us will entice Rob to come along too. Tony strung up some christmas lights in the lean-to. We stayed up quite a bit longer than I had the last few nights, but it was not too late. Day 5. 12/30  I think it warmed up over the night. It was definitely the warmest of all. Not too much in the last morning. Just coffee, and breakfast. Tony had planned to be home by a certain time and I had a 5+ hr drive. We had no need to rush, but we didn't dawdle too much either. I have a lot of food left; it will be interesting to see exactly what is in my food bag when I get home. We started down the trail with micro-spikes but it became clear we would be taking them off soon which we did at the first junction. The ice was melting from the trees which made it feel like raindrops. Only a few miles back to the car. A few hills to climb which really warmed me up. We passed by a few hiker groups along the way. Glad I had a change of clothes in  the car. Would be nice to get out of these. Before I chnaged, Tony and I took a selfie video and we promised to plan another excursion for next year. 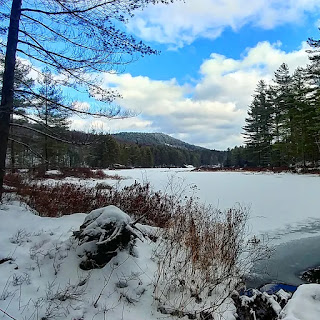 I had expected at least one day of wintry mix weather which never materialized. So 10/10 on weather for the trip. First night with Justin and final night with Tony; fantastic!