Preston Ponds Club + an extra night on 8th Lake and some sad news.

The annual meeting of the Preston Ponds Club was this past weekend. Due to my need to return on Saturday, I went up a day early with Andy and we pulked to Dunning lean-to on 8th Lake via the Browns Tract snowmobile path. The last few days had been warm and rainy, so we did not tempt the ice as it looked a bit rotten. There was a small section of open water right near shore which would make for our water access. The temp was just around freezing when we arrived and would rop continuosly to about zero overnight. At the lean-to the wind from the front moving through made it feel considerably colder. It finally settled down as did we and had a superb night sleeping. In the middle, the moon shone directly into the lean-to. I had to pull the hat down over my eyes to continue sleeping. 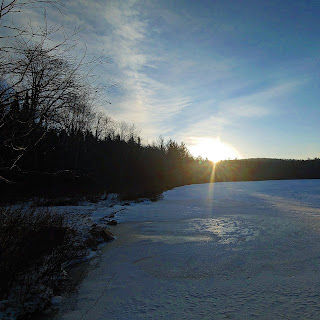 The next day we were both up before the sunrise. Since we were meeting folks later in the morning we didn't have to hurry. The temp was about zero, the hole in the ice was now gone. With coffee in hand we watched the sunrise from the lake. After packing up we made the quick hike back to the car and continued on to our next destination. Others would not be here for another  hour at least, so we hit the diner and had a fantastic breakfast before returning to the Stewarts. Bob, Matt and Sam soon arrived and we chatted in the parking lot for a bit and then headed to Upper Works. This would be the first time parking in the new lot. It would add a short distance to the hike, but not much.

Hoping for the best, I brought my pulk but was prepared to load all my gear into my pack if I needed to break trail. The tread was so far quite firm so all that was needed was microspikes. Henderson Lake was mostly just ice with a few thin drifts of snow. My first step on broke through a slush layer which was immediately concerning but the concern was quickly gone as we moved away from that edge. Microspikes and the pulk sliding across the ice made talking alll but impossible unless we stopped. As we approached the far end, we could see where the inlet overflow had washed up debris over the lake in the previous warm weather and rain. We could see it added at least another inch to the ice. We were still a little tentative as we approached that end though. A few places we could see a layer of water between  layers of ice. A quick pause at the lean-to and then  a longer one when we realized the snow crust would not hold with bare boots. Snowshoes allowed us to more or lesss stay on top. The first bridge was a difficult crossing. Sam helped ferry our pulks over as more and more ice and snow was dislodged from the bridge. Knowing we had a few more of these, made me a little uneasy. One of them required us to walk sideways dragging the pulks by hand. This was not fun. The broken bridge just before the hill cause a little issue as Sam's pulk broke through the ice and he almost went in himself. A few feet downstream we got everyone across without too much issue. 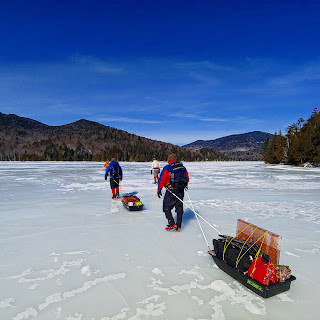 We then made our way up the hill. Sam was in front next was me. Bob had given me the extra key knowing he would be going slow. I still had my pulk so I would not be that much ahead of him. Sam and I got to the cabin first and readied the wood stoves. I made sure the outhouse door was clear and cut a hole in the ice over the creek for water access. A few minutes later the rest of the crew arrived.

We would be expecting two more in the evening and then another two the following day. After dinner we cleaned up and hung out waiting for G&T to arrive. A lot of guessing as to when they would show up. At some point we laid down on the bunks and fell asleep. We had left one light on in the cabin and Andy had put another one down by the lake.

The next day we cut and split some wood and waited some more. Concern about the others would wax and wane. The snow started last night and would continue on all day adding at least 8 inches of powder.  Andy made a fantastic chili cheese dip for lunch. Later we had a ham boil with potatoes and carrots. Still no George&Tammy. Using Andy's satellite comm we send a text to see if they were ok. We never got a response. After dinner we were just starting to play some cards and the door opened. It was Glen &Teresa. It took them 4 hours to get here as  they needed to break trail through the new snow. The last few hours in the dark. We re-heated them some ham and taters and they let us know G&T were ok. 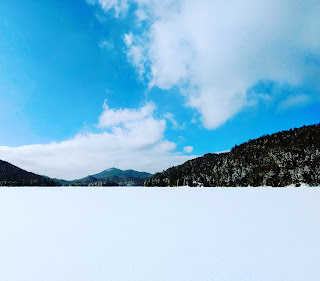 I was one fo the first to go to sleep amd of course the first to awaken. I started the coffee and the kitchen stove. Andy and I would be leaving today which we did soon after breakfast. The trail was relatively easy since Glen & Teresa came through last night. The powder made both Preston and Henderson slower than when it was just ice. The wind gusted a bit as we approached the turn on Henderson. I had to cover my ears with my hand as the wind was cutting right through my hat. We saw a few skiers off in the distance and passed a couple more as we neared the parking area. Back at the car before 11am. It took us less than 3 hours to get back. We then began the long drive home, along which I learned my friend Redhawk had passed away. Great trip but the news put a damper on my spirits. Sent a few messages to others to let them know as well. Redhawk had turned 80 in January.

Walk on my friend.

Colin and I haven't seen each other since college. We had communicated on/off about doing a trip together but it never went beyond the concept stage. This winter we decided to set a date and meet up. Since it was still winter, we kept it easy and base camped at one of the twin lean-tos in the Sugar Hill State Forest. We pulked in some gear and had backpacks too. Aftfer setting up camp, we went for a snowshoe hike along the finger lakes trail and then returned via the snowmobile trail. Was great weather and had an awesome time catching up and reminiscing about old times.