Justin and I had been trying to figure out when to go back to the W. Branch Sacandaga River for a few years now. This seemed like the perfect weekend. It was all set and my college roommate was joining us. A few days prior I mentioned to Justin the possibility of the Northern Lights (due to a recent coronal discharge). Immediately the plans changed to find a location with a northern view. We settled on the Boreas Ponds with the high peaks backdrop to the north. 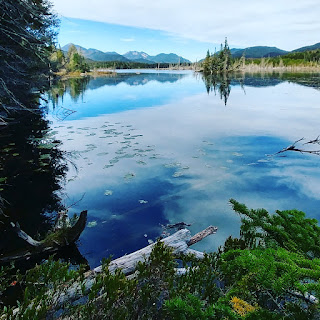 I picked up Jeff early in the morning and we made the long drive to the Vanderwhacker Forest and drove along the gravel road to the trailhead. A few cars, including Justin's, were already there. Jeff and I hiked along the rest of the road past the gate the few miles to the dam. Along the way a truck passed us. As we approached the dam we could see a few people gathering having a chat. we stopped to take in the view and down the trail came Bill. He and Justin had come in earlier with their canoes and said they would meet us at the dam. The timing was perfect. I had a rough idea of the campsite location, it shouldn't have been too difficult to find although the trail was not not visible from the main trail/road. So it was great Bill and Justin met us at the dam. We all hiked the remaining way to camp every once in a while on the remnants of an old wagon road in the woods. we made camp, explored a bit, took a short paddle. 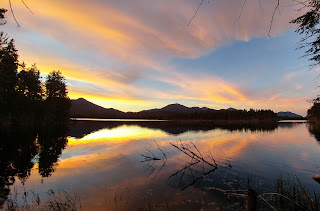 While the northern lights did not appear, the sunset did not disappoint. When we returned home, many people from around the Adirondacks has posted photos of the sunset. The next day, Jeff and I hiked out first by bushwhacking back to the main trail and then past the dam. 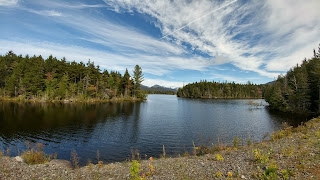 While this was not an extreme adventure, it was still great to hang out with friends in the woods. The Boreas Ponds are quite pretty. I may return to try some fishing at some point, but I do not think this will be a recurring destination on my list.
Posted by DuctTapeADK at 7:43:00 AM No comments:

Another scouting mission for the NPT-west. This would be to check out an alternative to what I originally envisioned for a small section as well as visit a spot I haven't been to in a while (and never from this direction). I set my sights on Sand Lake via the unmarked path from the west. To add mileage and check out some other trails I started near the Oswegatchie Educational Center on Long Pond Rd at the far western edge of Watsons East Triangle WF. The parking lot was empty and I signed in at the register noting many from the Ed center use this trailhead to go to Trout Falls and Jakes Pond.

A few minutes into my hike along the easement land, a guy (Brandon) and his son (Logan) were fixing a pin on their ATV so I paused and we chatted a bit. They were bringing in a tree stand for the hunting club. They also mentioned their game cameras have picked up quite a bit of bear activity between the footbridges. Also a decent buck. They allowed me to ahead of them and I continued along the recently logged area. I did notice some bear scat along the way.

Soon I was on state land, and crossed the west branch Oswegatchie River, the trail became more closed in, although it was obvious atvs still came through. The forest here was quite pretty. It changed quite a bit both the flora and geology as I passed through. The trail had a few small rises to open rock areas. The air was still a bit chilly, but the sun was warming up the rocks. After about 45 minutes I came to the junction of Keck Trail and Jakes Pond Trail. The map shows a campsite here, but I didn't see anything. It is possible there was a campfire circle hidden among the ferns but without a water source this would be solely a winter camp. 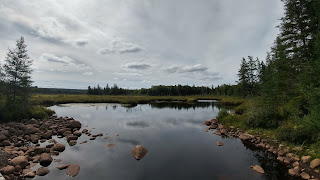 Taking the left fork to the Keck trail, it was more rugged and was even more winding than it showed on the map. The map showed 3 campsites along the next few miles, but were dry and hidden as well. There were a lot of different fungus growing near and on the trail. Even the air was filled with the scent of fungal decomposition.

I passed another open rock area which was perched above a marshy area which had been dammed up by the beavers a long time ago. The overgrown remnant dam provided a was across the deep trickle of muck. The path was not obvious at first. Back in the woods a few muddy sections and atv tracks as well as a few bear prints. As i descended a small rise I came to another marshy section. This was criss-crossed with small rivulets hidden in the tall grass. The grasses themselves would sink underwater when stepped upon. There was no discernible path, no markers to be seen. I spent about half an hour trying to figure out where the trail went. Had I seen a marker or a trail on the other side I would have figured out a way to it. Instead I opted for plan B of my adventure. I would scout from the other side a different time.

I headed back towards the Jakes Pond junction. I spent a extra time looking for some of the other campsites, but could not find them. I did come across a moose shed in a small clearing. 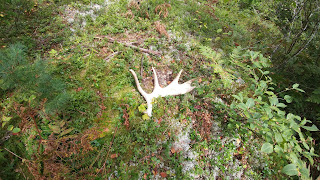 A few minutes later I heard the sound of a motor. I paused on the trail and watched an atv slowly make his way around the bend in the trail and up towards me. I stepped aside as the red honda with 5 gallon buckets strapped all over it passed me by.

I was getting low on water by the time I reached the junction. But I knew I would pass over a bridge soon. Taking the right fork towards Jakes Pond this time I headed to the river which would be the boundary between Watsons East and the Pepperbox Wilderness. I crossed the bridge and filled up my water bottle with the tannin stained water. This trail was obviously and old woods road at one time. I noticed an increasing amount of bear scat. Some newer, but mostly old. At one point I thought to myself there is poop every ten feet. I came over small rise and entered a newer growth forest with a lot of cherry trees. Some motion caught my eye and I stopped. I looked towards a stand of trees and looking back was a bear. She made a quick grunt and then two cubs scurried up the trees. I had happened to have my camera out, so was able to safely snap a few shots before i slowly backed up. As I gave momma more room, she moved into position between me and the cubs. I backed up further and waited. She backed up to her previous position. I took a wide berth around as we watched each other. My arc intersected with the trail well past the bears' foraging area. A couple hundred yards later I came across a beaver flooded section, but a well worn herd path directed me to the dam. I came to another one of these sections a little later on about a half mile from Jake's Pond where the beaver dam was just above a small cascade into a frothy pool. 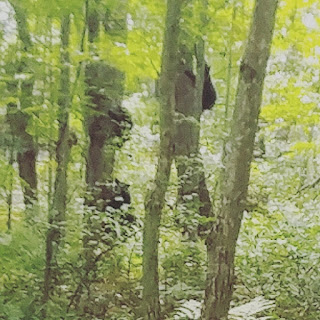 The old woods road headed uphill slightly to eventually reach what appeared to be a small esker between Jakes Pond and a water filled swamp. The esker made scanning the shoreline on both sides easy. Jakes has a very interesting shape. When I reached the southernmost point, I headed back and then off trail to the northern parts of the pond. No campsite was shown on the map, but sometimes one can be found. No luck and the shoreline was mucky. I took a break under a large white pine before heading back.

Back at my car at 4:30 after about thirteen miles of hiking, I needed to drive up the road a few miles to a different trailhead to get to camp. I parked near the bridge over the W. Branch Oswegatchie and took the dirt road near the private land. At the stat land sign, I headed up to the shore of Mud Lake looking for the campsite which showed on the map. There were two, so I was confident I would find at least one of them in the open pine and hemlock woods, if not at least I would have water. I found a little used site just around dinner time so I made camp. Even with private lands close by, I seemed to have the entire area to myself except for the loons.

It was a chilly night as expected. The morning glow over the lake was too good to pass up. 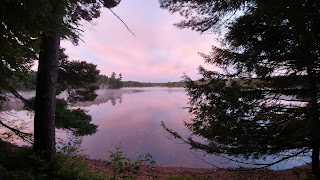