No Vacancy at Cedar Lakes

A few months ago, Kyle on the NPT page posted about wanting to hike from Piseco to Wakely and was looking for people to join him. I sent him a message about being open Columbus Day weekend. So we made plans to hike the 30 miles. As the trip approached we settled on the itinerary and meeting time to spot cars, etc... The weather forecast was looking good and the fall colors were just beginning to peak. I left Rochester at 3am to meet Kyle at Wakely Dam. I arrived a few minutes early and was pulled over at the side of the Cedar River Rd entrance to send one last message before cell signal would disappear for the next 72 hours. Kyle recognized my car and pulled up beside me. I finished my message and he followed me to the parking area. We left his car and transferred gear into mine and drove to Piseco.
As we signed in to the register we noted there were two others also hiking our route. kyle led the way, and we were making good time. We soon came upon the two other hikers (Jim and Glen) and the Siberian Husky (Kai). We exchanged pleasantries and pressed on. We stopped for lunch at the fall stream campsite. The miles were going quickly. Crossing Fall Stream and the Jessup River were easy with the low water levels everywhere. The sky began to drizzle a light rain on and off. Not so much that it required rain gear. More like a light mist. At Spruce Lake #1 a couple was at the lean-to. They mentioned that #3 had people as well. We continued on to #2. A guy and his dog were there. He said if #3 was full, to come on back and share the lean-to with him. At #3, two guys were there and after some conversation, they invited us to stay. They had carried in 2 canoes to do some fishing. We set up nearby and I collected some firewood to add to their pile. A short while later Jim and Glen (and Kai) would show up. We cooked up dinner and shared stories as the rain came and went.The two fisherman (John and Bill) had some great stories, including one where Bill recalled the tale of him and the group he was with getting hit by lightening. As darkness came, I retired first having been up since 3. It rained on and off through the night. By morning though it was done. There was a chill in the morning. One of my favorite parts of fall camping.
After everyone had coffee/tea John and Bill set out in their canoes, Jim and Glen heading down the trail and Kyle finished packing up. We soon caught up to Jim and Glen at their snack break. While we were chatting, a woman came walking down the trail behind us. I grabbed Kai's collar as the woman seemed a bit nervous. As she got closer we noticed she had no gear except a small shoulder bag and a jacket. She quickly passed on between us without saying a word. It was rather creepy. Her appearance and demeanor was unsettling. Later on Kyle mentioned her again and jokingly referred to her an apparition. We took a break at the sampson outlet just after the bridge. A family of mergansers had fluttered away as we got there. The day was beginning to warm up. We stopped at the bridge over West Canada Creek and at the lean-to to read the log book. 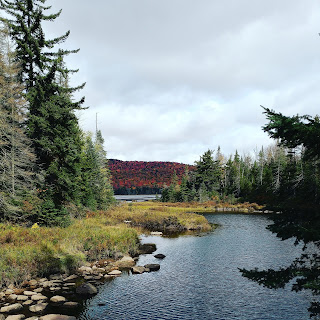 We stopped for lunch at South Lake. While eating I read and signed in to the log book. I noted that a group of women had signed in today as well. Two sisters with their mother. Kyle and I stopped at West Lake as he had stayed there 15 years ago. There was no shelter log, but someone had left a 1988 Playboy on the shelf. Cindy Crawford was on the cover. It wasn't strange finding a Playboy in a lean-to, but one from 28 years ago, and in near newsstand condition was odd. Kyle flipped through looking for a Saab advertisement as he was in the process of restoring a Saab from the late 80's. We noted there was an advertisement for cassette tapes. Kyle put the magazine in his pack and we headed out. While we were at West Lake, Jim and Glen had passed us by. We caught up to them again. The next miles seemed to take a while. Enjoyable hiking although my knee was beginning to ache a little. The sky was slightly overcast. It had been 2 years since I hiked through this section of trail going the other way. As we neared the turn off to the Fishermans lean-to 3 college students approached. they were part of a group from Colgate. They asked if there were any empty campsites up ahead. We mentioned West Lake was empty, but it was quite a few miles away so they chose to rejoin their group at the fishermans lean-to. We inquired whether they saw the strange woman who passed by us earlier; they hadn't. We asked about the campsites towards the dam, and were told wagon wheel , and #2 had people. I filled up water at the spring and we found the Beaver Pond campsite also taken by the woman who had signed in at South Lake. Kyle talked to them while I filled up the water bottles. They hadn't seen the strange woman either. Turns out they left the lean-to about an hour before we arrived. The joke this woman was an apparition continued. Onto lean-to #1 or the nearby designated spot. At lean-to #1 a group of three were having a good time. They said if the other site was taken we were welcome to camp nearby and join them by their fire. The site was taken so we set up nearby and soon Jim and Glen joined us. I went up to the lean-to to cook my dinner on the fire. Talked with the guys there while my com-padres ate down by the beach. Afterwards they came up to join us by the fire. We handed the playboy to Nick, the 22 year old of the group. He was rather inebriated, and flipped through the magazine. Having grown up in the age of the internet, seeing a Playboy was a first for him. Hey turned the pages saying "there's a dude, there's another dude". Followed by "oh look, a turn-page". We all laughed at his description of the centerfold. It was funny, and fascinating how the concept of a centerfold which was iconic in the latter half of the 20th century was virtually unknown in the 21st. It was a good laugh though. Compounded by the fact Nick was rather drunk. We read a few of the Playboy Party jokes around the fire before we went to bed.
It got cold over night. As we had our morning coffee/tea it was only 35F, the sun was shining so it was warming up. The guys at the lean-to were awake by the time we packed up. Nick was not as chipper as he was last night. Kyle left the Playboy with Nick's dad to give to him later. The sun was warm, but it was still quite cold in the shade. We signed in at the register by the dam and noticed a single woman had day hiked from the Jessup River trailhead on her way to the Pillsbury TH. The mystery of the strange lady was solved. Still, she seemed off. The next few miles were the section of trail I maintain. Since I didn't bring any tools, this would be recon and I would come back later in the month to cut blowdown if needed. I love how this section of trail changes from open hardwoods, to spruce thickets, to hemlock stands. It also winds around quite a bit being relatively newer after rerouted from the other side of the river along the old roadway. There were a few blowdowns I would need to take care of this season. I good excuse to go hiking again before winter makes this area all but inaccessible.
The bridge over the brook halfway between the Sucker Brook Junction and the Carry lean-to has fallen into the brook. It was still able to be used, but if it was wet, the angle would make it impossible. At the Carry lean-to 3 guys who had been there since Thursday told us of some obnoxious visitors who tried to muscle them out of the lean-to. They were now on their 4th day and staying another. They had taken over the lean-to for longer than the regulations allow without a permit. And since the regs also state that one needs to share the lean-to up to capacity, I wondered to myself which party was really at fault in the encounter. Probably both. 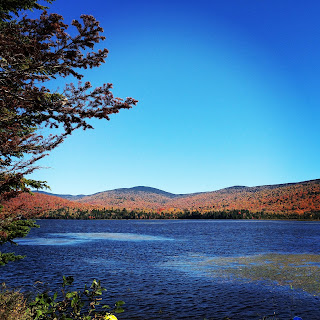 The last few miles back to the car went quickly. It was starting to warm up. By the time we got back to the car it was close to 50F. We shuttled Glen and Jim back to their car which was another 3 miles down the road and then went to retrieve my car at the Piseco trailhead. I will need to get back one more time this year to check on the Colvin Brook Lean-to. Not that I really need an excuse to go to the woods, but it helps.