For many years I organized a group trip to the Adirondacks on St. Patricks Day weekend. It has been quite a few years though. I remember some of them with very mild temperatures; almost spring like. Some quite cold.

This year I didn't have set plans and as I was trying to figure out where to go on a solo trip I received a call from my friend Dan. He had plans to go skiing on Sunday but was looking to camp over Saturday night. Something easy so he could get back to the car to meet others at the slopes on Sunday. We opted for Johns Pond in the Siamese Ponds Wilderness as it had a lean-to and was just over 2 miles in. 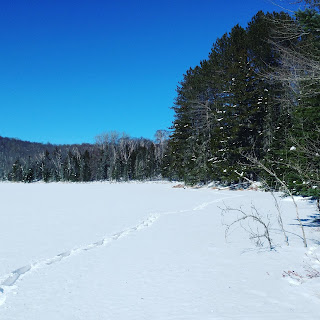 I left home around 6am and met Dan at our usual rendezvous point. We caravanned to the parking area which already had a single car. The trail was broken out likely by the car's occupant. At the register we noted the hiker was only out for the day. The temp was in the mid 20s and the sun was shining. We took the hike slow as we had only a short ways to go. We stopped periodically to enjoy the scenery through the woods.

As the trail swung away from the big brook, the day hiker came bounding down the trail. We exchanged hellos and he commented on how nice it was at the lean-to spot at Johns Pond. Passing by the side trails to Puffer and Clear Ponds we arrived to our home a little after noon.

Dan checked out the pond, I snacked on some cheese and went looking for firewood. We both gathered a quite a bit, had lunch and went for more. We joked a few times that our giant pile was a good start. We ended up leaving about 50% of the wood we gathered in a nice pile for the next group.

We had dinner and even before the sun set we could feel the temperature falling. The clear skies were hinting at the significant mercury drop. Stars appeared, fire was stoked and my eyes were closing. I might have made it to 9pm before I climbed into my bag.

I was warm in my bag until early morning. I fought the need to exit the warmth and empty my bladder. I eventually capitulated. It was cold out as we anticipated. After returning to my bag it took a while to get warm again. I might have fallen asleep for a short while after, but Dan's alarm rang out at 6am. It was still dark, but the early morning glow was just beginning. We packed up by headlamp and were heading down the trail before sunrise. But by now the woods were bright enough. The snow squeaked beneath our snowshoes as the air stung any exposed skin.

I traveled over a mile before I dropped a layer and my toes still hadn't completely warmed yet in my semi-frozen boots. I signed us out at the register and we loaded up our vehicles. Mine struggled to start as it was still minus 8. I am not sure what was more of a challenge this morning, the car starting or me. Always good to be out in the woods. I would find out later it was minus 14 over night.