Five days in the Pharaohs, and four more lean-tos.

Day 1: Met Dan at the Park and Ride and we caravanned to Putnam Pond Campground. Short hike for today to Little Rock Pond where Justin would be meeting us. Walking through the campground maze of roads to find a trail was unpleasant. Eventually we just took a compass bearing and headed into the woods. It was not long before we found the trail. Sometimes it is easier to navigate with map and compass than trying to figure out the man-made roads. It did not take long before smoke was visible from the lean-to. As expected Justin was there before us. He greeted us with our choice of beverages. The rest of the day was gathering wood and conversing and trying to ration our beverages for our 5 day trip. We made is past dark and Dan made dinner of venison, potatoes and brussel sprouts. The moon rose illuminating camp but it wasn't long before we went to bed. 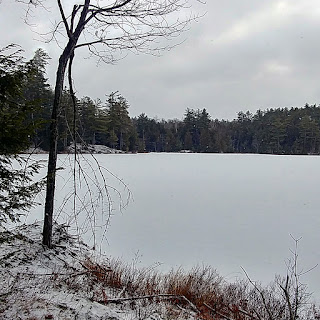 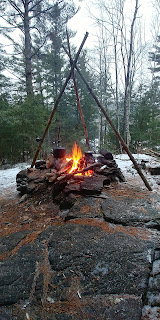 Day 2: I arose and got the fire going. We had another short day so we were not in a rush. Justin would be heading home, so we spent as much as we could with him before we took off to our next destination of Lilypad Pond. We stopped at a few cascades and waterfalls along the way. The largest was roaring. The terrain in this area is really neat. I can see why Justin likes it so much.  We arrived at Lilypad for lunch. Wood was easy to procure. I built another tripod for Dan's large hoop handled pot which makes for easy cooking. A few more beverages, gathering more wood.There were significant crashes of what seemed to be falling ice in the woods across the lake. My turn for dinner was a chicken jambalaya. Not sure what time we retired but it was not too late. Again the moon was bright. The crashes of ice would continue sporadically through the night. 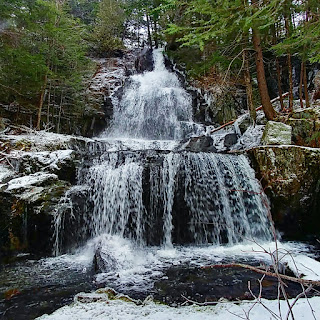 Day 3: Our longest day of about 5 miles plus a side trip to the top of Pine Hill. Since the trail gained much of the elevation as we passed by Pine Hill, we decided to drop our packs and climb the rest of the way to the top. While the summit was mostly bare, there were little views. Of course our approach/descent was on the steeper south facing side of the hill. It was not too bad as there was so little snow. Passing by Horseshoe and Crab Ponds the campsites were obvious but we did not stop to check them out. We did stop later on to have lunch soon after crossing a creek which we had to find a way across. We still had most of our daily miles to cover and with the sun setting early we needed the daylight to gather wood. So after a late lunch we started moving without much pause. The trail gained elevation to the junction and then gained some more as we climbed alongside of Pharoah Mtn. A long steep descent to the trail around Pharaoh Lake which was slippery with the wet leaves. At Split Rock lean-to we got to work searching for wood. It was difficult to find any good stuff so we had to make due with primarily softwoods and gathered from quite a ways away. The wind was stiff coming across the lake spreading sparks and smoke into the lean-to, My turn agian for dinner; shrimp and corn chowder. Came out quite well. Definitely a keeper for these winter trips. Will have to figure out how to use dried shrimp for other seasons. Had my final beverage which I saved from the previous night. The wind howled through the night. By morning the lake had begun to freeze up along the shore. 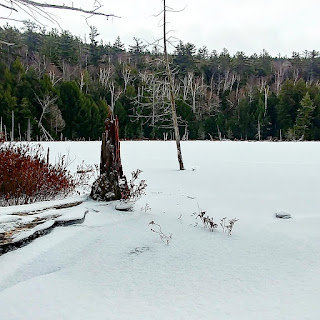 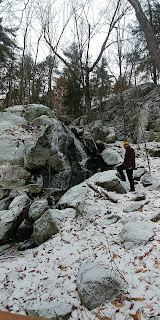 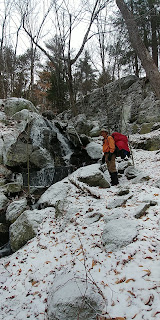 Day 4: Our last full day. So far we had some late starts to the day. This was no exception. After yesterday's wood gathering difficulty, we wanted to leave us enough time to gather wood at Grizzle Ocean expecting it to be picked clean like Split Rock. Less than a mile to the swing trail, but we took a short side trip to Wintergreen point. The wind was still brisk across the lake so we did not spend too much time at the point. The swing trail gains about 500' as it winds itself up and around the inlet of Wolf Pond, associated beaver marshes and the lower extension of Grizzle Ocean Mtn. As we approached the trail around Grizzle we heard some voices off in the distance and footprints on the trail. We still had about a half mile to the lean-to.  The voices ended and we followed the footprints (going the opposite direction). As the lean-to came into view, we announced ourselves so as to not startle anyone. The lean-to was empty. So we settled in and began our camp prep. Firewood was plenty, but is was a little distance away. We expected temps to drop this evening, so a warm fire would be nice before we went to bed. After gathering some wood, and fixing a warm drink we sat around a bit with more wood gathering every once in a while. A large pot of soup for dinner and we settled in for the night. 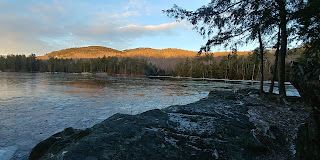 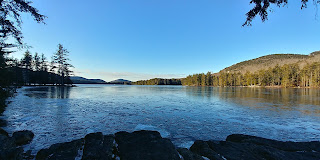 Day 5: With our early bedtime, I was awake early, but forced myself to go back to sleep. As expected the temperature was significantly colder last night. We had plenty of wood left from the last evening so a nice morning fire was easy to get going. After a lazy breakfast we took a day hike around the pond, checking out the different campsites. Some quite a way above the water's edge. A few few soda cans littered one campsite so we picked those up.Back at camp, we packed up our gear for the short hike out. Just as we were leaving a small family group approached. We chatted briefly. They were just day hiking. Seems like the popular place for it. It is popular in the summer for camping, which is why we chose to visit in winter. 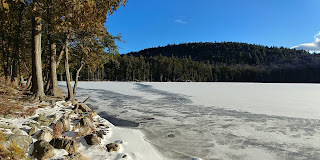