With a three day weekend the Cold River area is a favorite as it provides me with plenty to do on the the extra day. I would really like to spend a week in there. Perhaps next year. I mentioned the trip to JayM , @adkwoodswalker, and he was excited to join me. At the last minute family/friend issues arose and he had to back out. Hopefully we can arrange a trip next year and beyond. A few others also could not make it, so it would be just Andy and I. He reminded me it had been quite a while since we had backpacked together. I guess I didn't realize that much time had passed. probably because we communicate often and the visits to his cabin. Anyway, this would be a fun time. 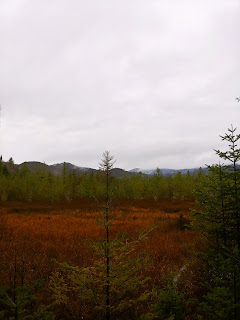 We met at the trailhead, Andy was there ahead of me having spent the night at his cabin. I left Roc at 3am to be at the trail by 8am. The goal was to get to camp with enough time to gather wood before the rains came. We saddled up and headed up the trail. The parking area is usually quite full, but it being friday and a wet weekend expected, a lot of day hikers are not here. We set out up the horse trail . The leaves covered a lot of the mud and rocks. A few deep sections of boot sucking mud, but we have had worse. We mader it to the junction quite quickly and made the turn towards Calkins. This trail follows an old road so travel is easy, especially this direction. A brief stop at Calkins and then the big uphill and downhill. We stopped a the spring to fill our water bottles. I was given info the flooded section was no longer flooded. It was. Using the beaver dam aka "muck line" we were able to keep the water from overflowing the tops of our boots. Gaiters and rain pants helped too.

We arrived at CR#3 well before any rain, so I went back to the old beaver dam and collected some dried hardwood while Andy set up and collected some wood nearby. We started a small fire to allow it to smolder for when the rains did come. Had a late lunch and a step two. I knew I would not have my big dinner, just some soup. I also knew I would not be staying up very late due to my early start and the sun setting before 5 pm. I am not sure I made it to 7pm before I was asleep. Some rain over night, at one point it was co ming down hard. I slept well; Andy not so much. It the morning he told me he saw lights near the bridge and realized it was headlamps from hikers at the other lean-to. We did not hear them earlier, so they must have arrived after dark. Some coffee and a lazy morning. The air was still wet; on and off rain/mist. After a quick bite, I went to the beaver dam to get more wood. I did not put on my rain gear which was a mistake as all the brush soaked me within minutes. These clothes dry quickly though.

As the sky lightened a bit, I packed a day bag for my short excursion to the Seward Camp. My main goal was to look for the spring, with all the rain, I figured it would be easier to find. The Cold River was already starting to rise. By the time I returned, it would have risen about 2 feet and then some more. 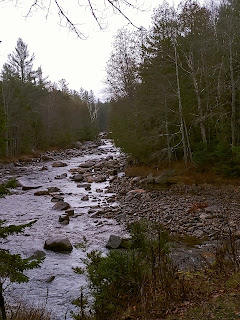 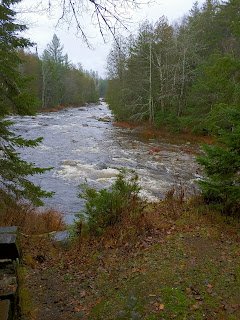 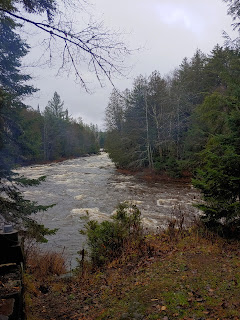 I stopped at Big Eddy for a snack and then explored the old camp. I found a few possible springs where the occupants would have drawn water, or used as refrigeration. Will need to bring metal detector next time. 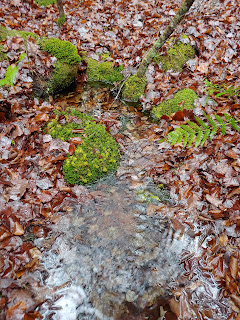 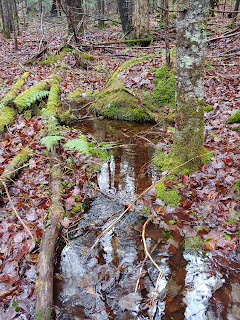 Behind the old camp, I tried to see if I could find remnants of the old trail to Seward Pond. There were a few areas which "felt" like old tread beneath my feet. An old axe blaze just after a large boulder was more evidence I was at least in the correct vicinity. I did not venture too far, saving the full exploration for another time. Perhaps coming from the other end? 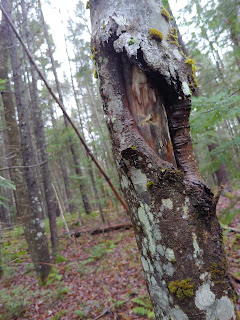 Back at camp, Andy had started a smoldering fire just like the previous day. As mentioned the water had really risen. The falls at Big Eddy were thunderous. Another area to explore more. Cut up some more wood, setting some aside for either the morning or the next group. More soup for dinner, but a more hearty one instead of mostly broth. I stayed up a little later, but probably not by much.

The temperature fluctuated during the night. It warmed up and then dropped. With the long drive home we did not dawdle too much in the morning. The breach I made in the mucky beaver flooded area was repaired already. We took a slightly longer break at Calkins. Noted the entry in the log book from aguy showing his friend a favorite lean-to. A few days later an entry from the ranger on a S&R looking for said friend. The ending was not good. Back at the cars in no time. Always a good time with Andy and on the Cold River. Already looking forward to my next trip there.

For the last few years I had been having a camping trip on my birthday weekend. These were quite fun, but we did not do much hiking. This past year I realized I had to take advantage of my ability to backpack in, or portage my canoe to backcountry sites while I am still able to. Not that Colvin Brook lean-to is very far into the backcountry, but it does require about six miles and wading across a river. 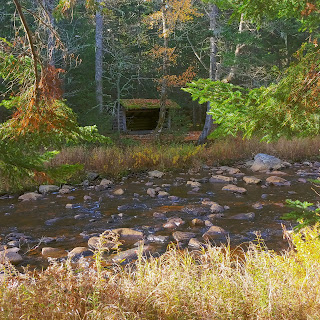 Kalie joined me on the trip. I always have big plans to explore more of the area in the vicintiy of the lean-to, but never get around to it. Maybe this would be the trip. Kalie was a few minutes ahead of me arriving at the trailhead. The weather was perfect. The leaves on the trail obscured rocks and such which was annoying and the rustling of the leaves underfoot made communication while hiking difficult. So we mostly hiked in without talking much. We stopped at the Carry lean-to for a break on the way.

Once at the Cedar River we put on water shoes and waded across the very cold water. My feet were red and numb from the cold by the time I reached the other side. 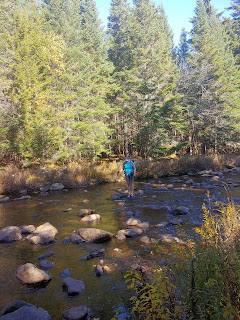 I set-up in the lean-to and Kalie put up her tent.Firewood was collected and broken up. I decided to take a bit of a stroll down the trail towards the beaver flooded area. After some poking around I found a good way to get across a bit more downstream. I made my way back upstream to reconnect with the trail. It has been quite a few years since I came this way. I headed back and lost my original path across the flooded area. I realized I went to far downstream. I made my way back up and found the easier crossing.

On my way back to the lean-to, I checked out the "island" and then headed back. A fire was built and dinner was made. The sky had been clear all day, so we were hoping for a clear night to possible see some meteors from the Orionids. Interestingly, when I left home Saturday morning I saw a bright one as I drove down our dark street at 5am. It did not take long for the lean-to to get dark in the waning daylight. I put up my white christmas lights which really does a good job of illuminating the inside of the lean-to.

As darkness finally set in, Kalie stood on a rock in the river to look for meteors. It reminded me of the August many years ago when Ben and I stood in the river watching the Perseids. Kalie took a nice time lapse photo of the sky. I think she just changed the shutter speed to a few seconds. Came out nice though. She also spotted a few meteors but did not capture any on film.

Soon it was time for bed. Kalie decided to move into the lean-to for the night. I expected it to get cold, possibly below freezing. It stayed warmer than I thought possibly due to the river. I slept well. It was much needed. I had a nice large cup of coffee in the early morning. Knowing Kalie likes to sleep in, I stayed as quiet as I could. 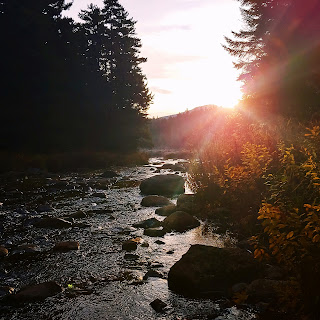 Eventually we packed up and headed back across the river. Again the water was frigid. It would take at least a mile of hiking before my feet would really warm up afterwards. By then I realized I forgot to take pictures of the shelter log book for the  "Colvin Brook Lean-to blog". Not that big of a deal, there were only two entries since my last visit with Lance this past spring. Probably will not be any new ones next spring.

I cut the two blowdows near the trail junction, and filled up my water bottle from the spring. The leaves were not as loud walking through them. Seems that the morning moisture has softened them a little. As we neared the Cedar Flow it appeared some other blowdowns had been cut; possibly a chainsaw. I wondered if it was Jon with the DEC crew. He had told me they would be coming through at some point. (After I returned home I learned it was not). Back at the cars, we checked out of the register. Not a super adventure, and not a sedentary campout either. A good hike in with a good friend, a relaxing campfire by the rushing river with a good nights sleep. Not a bad way to spend my birthday weekend. 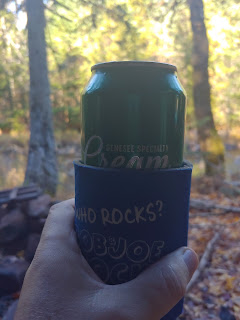