With 5 days to play with, I planned to also do some trail maintainance on my adopted section of the NPT. As plans began to take shape an email blast went out for Lean2Rescue in the same area. It worked out that my trip would start with helping L2R rehab the Pillsbury Lean2 which was only 3 miles from "my" trail section. I did not see Dan's name on the "going" list for L2R and before I could contact him, he called me. So the plan became: Saturday carry in materials still at trailhead for L2R and meet crew at Pillsbury and help finish/prep Sampson L2. Spend first night at Pillsbury and then the next 4 days completing the French Louie Loop, visiting Brooktrout Lake and clearing my section of the NPT.

I arrived at the Pillsbury trailhead around 9am, picked up the gallon of wood stain for the lean2 and began my hike up "old military road". My pack was filled to capacity with 5 days of food and fishing gear but was not too heavy. As I neared the junction a group of 3 passed by inquiring if I was "Russ". They also helped with the lean2 on Friday and let me know the stain was still needed. Donna recognized me (from fB). We all continued on our way. Arriving at Pillsbury most of the crew had relocated to Sampson to begin the site prep for the new lean2 location. The skeletin crew remaining at Pillsbury was putting on the finishing touches. I began helping out at Pillsbury. As we finished the rest of the crew returned from Sampson. We had a full crew to hang out with and have dinner. We were all tired and went to bed rather early. It rained over night.

On Sunday the main crew headed back to the trailhead while Dan and I continued West back towards Sampson.We put on our rain gear as the trail would be "bushy" and with the rain would be wet. I would deliver the gallon of stain and then press on to South and West Canada Lakes. We took a snack break at Sampson and lunch at West Canada Creek. 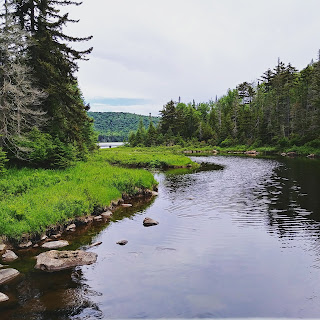 We also spent some time exploring the shoreline of Mud Lake outlet. We stopped again at South where Dan explored the shoreline. While he was out, a rainstorm developed and he got soaked. I had moved our packs into the lean2 to keep them dry. The rain would come and go all afternoon. At West Lake we decided it would be camp. The cloudy sky looked to provide a potentially nice sunset over the lake. I was not very hungry but knew I needed to eat something. Again we retired to bed early. 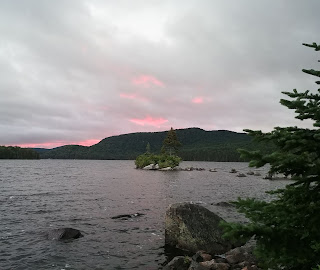 Monday would be a day trip to Brooktrout Lake for some fishing. Dan explored the shore of West Lake on the way. At the Brooktrout Lean2, I noticed in the log book it was exactly a year to the day I was here last with Jeff for that sweltering hot weekend nn 2018. Dan and I fished all day and returned to West Lake.

While getting things ready for dinner a snowshoe hare wandered nearby. He spent some time in a little depression in the forest floor popping his head up every once in a while. Again I was in bed relatively early. 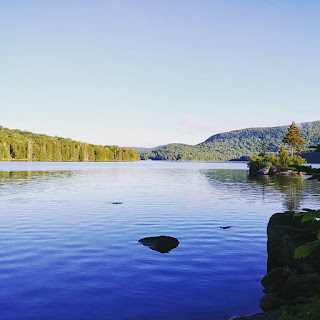 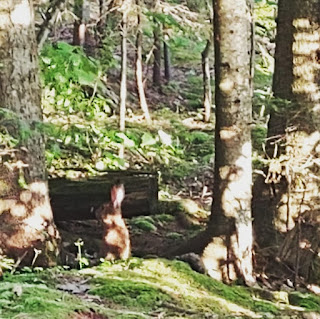 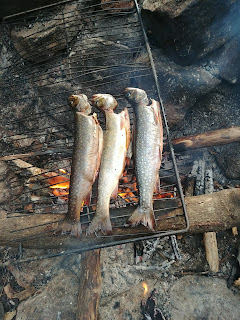 Tuesday, Day 4 we would continue along the NPT to the Cedar Lakes stopping at Mud Lake, Cat and King Ponds to explore. Once past the wet section, the trail opened up and was easy walking. Some on an old roadway. We made good time getting to the Beaver Pond lean2. We set down our gear and went exploring. Dan took Beaver Pond, while I took Cedar Lake. While I waited for Dan to return, a couple backpackers stopped at the junction. We chatted a bit and continued on to the first lean2 instead of joining us. Dan then arrived and we went out fishing. As we were out a couple from NH (Jonathan and Danille) arrived to camp. Also joining us was Asher and his two boys. It was getting late and I still was not very hungry. I usually enjoy eating on these trips but for some reason food was only fuel; except for the fish tacos we had at West Lake. I did eventually make dinner. It was after dark before I finished eating and went to bed. 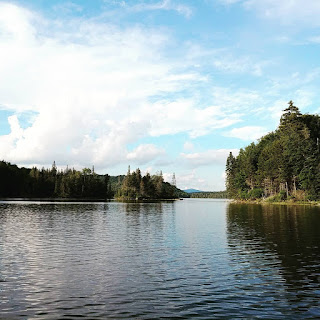 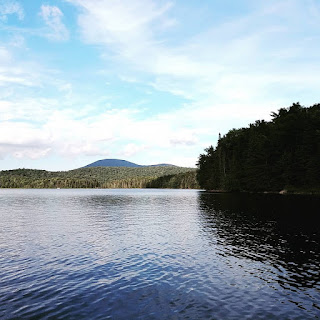 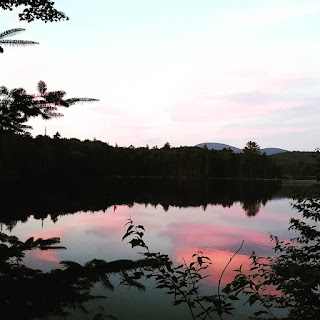 Our last day and I still needed to do my trail maintainance. I got up early, packed up and took only a waist pack with snacks etc... and my saw. The plan was for Dan and I to meet at the dam at 11am. I headed out just before 6am. It was slow progress as I dug out waterbars, cleared drainages and cut minor blowdown. 3 hours later and I had done just over 3 miles. 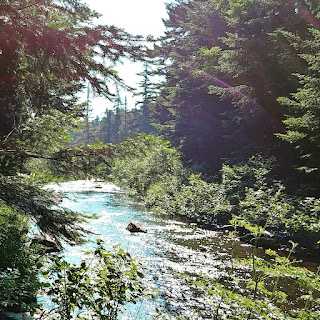 I stopped for a snack break and figured I needed to turn around so as to make our scheduled rendezvous. I was about 20 minutes early and Dan had already arrived. I made myself a late breakfast and rearranged jy pack contents for the 4.5 miles out to the car. The entire rest of the way would be on old road. We would first have to climb the shoulder of noisy ridge, cross the "fun house bridge" (named by Justin which apparently is catching on as many are using it) and then the remaning 1.6 miles from the junction on Saturday would be all downhill. We would do the last two miles in 40 minutes. As we drove out we decided we deserved ice-cream from Stewarts. A great way to cap off a 5 day trip beginning and ending with volunteer work. As my buddy Chuck (also from Lean2Rescue) would say, "It's camping with a purpose."
Posted by DuctTapeADK at 2:07:00 PM No comments: