Another Thanksgiving in the Woods. -Woodland Pond Lean-to 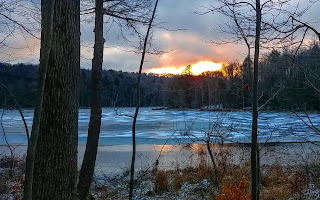 Eric reminded me on the drive up that we have been doing this for nine years now. Sometimes just the two of us, somtimes with others. Folks have come and gone, others becoming semi-permanent to the group. On the short drive to the trailhead we recalled some of our past thanksgivings in the woods. The trips to Queer Lake in the early days with Ian and others. In the years since we have chosen locations with shorter hikes in so as to carry more food and drink. This was no exception.

Woodland Pond in the Charles Baker SF is about a mile fromt he parking area. The DEC Forester provided us with some good intel about the best parking location. A lot of truck roads and equestrian trails wind around through this forest. Since we are in between hoirse riding season and snowmobile season we would have the place to ourselves except for the hunters. The parking area is apparently a sire used by partiers, as the middle was a bonfire pit with plenty of cans and bottles, We checked out the picnic area up the road a bit and it seemed meh. We loaded up our packs and headed down the closed portion of the truck trail. We left an arrow with logs for Andy to lead him to us tomorrow. The trail was easy and downhill. Even after the junction, it continued downhill. The sign at the junction said .7 miles to the pond. It was significantly less. From the car to the lean-to took us 20 minutes.

We expected some rain and snow during the trip. So far it has been dry. We set up camp, gathered wood and began our holiday celebration. We also strung up a tarp under which we put dry wood. As per are usual we had chili and hot dogs for dinner. We would have extra for the morning too. Rain came over night. The metal roof on the lean-to made it seem like a lot more rain than it was. The rain turned to snow in the early morning which made lighting the fire more pleasant. The snow was heavy at times with big wet flakes. As the morning waned, so did the snow. The sun came out for a bit too.

Andy arrived at noon. He would round out the group of three. Some of our other regulars, like Kalie and Chad, would sadly not be making it this year. With Andy's arrival the second half of our thanskgiving would begin. We had a pot of water on the fire and soon we had the turkey in as well. We had our full plates and bellies just as the day turned to dusk. Cheesecake for dessert too. I ate too much. 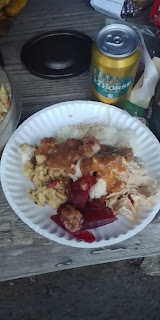 As the evening wore on, I was getting tired. I switched from my chair into my sleeping bag. The temperature flectuated throughout the night, or so it seemed. But in the morning it was definitely colder. Around 20F. More snow over night as well.

With the fire restarted, we had coffee and packed up. We were rewarded with a nice sunrise over the pond. With Meaghan (the dog) being cold we would be leaving as soon as she climbed out of her bed. Back on trail just before 8:30 and back at the car in 18 minutes. With Eric moving to Tennessee, these Tgiving trips with him might be coming to an end. He said he would drive up next year. So we should t least have a tenth one before the group make up significantly changes again.

A little late in writinmg this entry. I had forgotten to do it when I returned. Only a few folks read this anyway and two of them were on this trip. But I should record this for my own notes and memories. I met Andy at the Park&Ride for an early meet up at the trailhead in Thendara. The drive always seems to go quick with someone else. We were expecting colder weather this weekend but did not expect it to be in the twenties at the trailhead. Andy switched to his long pants and I donned an extra layer. Within a few minutes everyone else arrived... Justin, Bill (&Bella), Kalie and Caitlin. A nice brisk walk to start the day. I expected to drop a layer soon after we started but it took much longer. We were at the junction in no time. The trails here were supposed to have been cleared last summer. Later on we would see newer markers as evidence of the SCA crew being through.

A few obstacles to deal with on the hike. First would be the alder swamp flooded by beavers. Last time through we just walked across the mucky beaver dam. Next would be a stream with a log bridge that is not my favorite to walk across. The most worrisome would be the outlet of Simon which could potentially be a large cascade to deal with. The beaver dam itself proved to be rather easy, it was the next couple hundred feet of flooded area which required navigating through. It took quite a while for all to pick their way through the mucky area. The entire route to East Pond varies in terrain quite a bit. It is a nice hike; superb if not for the aforementioned obstacles. The log bridge had some forst on it which made it dicey. I made it half way, over the two log wide span. the next part was a single log as the other was broken. I turned back and found an easy rock hop just upstream. I joked with Justin about being cowardly but used a rather inappropriate term not suitable for publication. As we continued through the forest I recalled the location where I saw the fisher chasing the hare a few years back. The area was significantly more grown in since then. As we approached Little Simon Pond, there was some remnant snow in the shadows of the trees. The outlet was low; easy to cross especially with the giant log to hold on to. From  here it was about a mile, first uphill then down. The trail is hard to follow here but the woods are easy to walk through. I filled up my water bottle from a small drainage emptying into Little Simon. 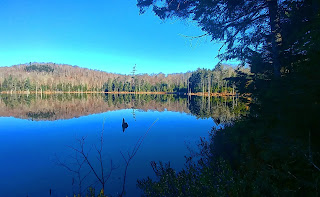 East Pond was just as I remembered. We all set up camp and gathered wood. A few of decided to take a side trip to the old mica mine at Blackfoot Pond. Not mush of a mine per se, just an area dug out of the side of a hill. Mica fragments can be found. Not very large pieces, but neat nonetheless. Before heading back, we stopped a the pond edge to take some photos and soak in the view. A couple beverages didn't hurt either. We headed back to camp. I guess my other exploration in this areas will have to wait again. Good excuse to come back next year.

We gathered around the fire and had a great time. Eventually most of us made dinner. I think I was the first to say goodnight and head to my hammock. I might have fallen asleep in my chair too. Not surprising considering how early I was up this morning.

I slept well. I think it was warmer when I got up then when I went to bed. Andy and I had coffee in the early hours while waiting for the rest to awaken. Justin was also up early. A slow morning since no one was anxious to leave. I took a short walk around the near side of the pond just to do it. Eventually we were packed up and headed back to the cars. We noted the growth arpund Little Simon where the old campsite was rumored was a little more open now since the 90's when blowdown obstructed it. Another reason to return next year.  Again I avoided the log bridge. We knew the way through the beaver swamp so it went a little quicker. Back to the truck trail and then to the cars.