Dan and I met at the Stewarts Shop in Northville, NY at 10:30am. We would then drive up to the parking area at the end of Hope Falls Rd to access the Wilcox Lake Wild Forest. The plan was to hike into Wilcox Lake, set up base camp and then explore some of the area. We also needed to inventory some of the supplies and take measurements for the other lean-to at Wilcox for the roof repair next weekend. The hike started off easy on a roadway with many tracks going in. Very mild temperatures for winter. 2 or so miles in we came to the next parking area which is used in summer. At this point we realized our shorter access trail would be about the same length had we taken the northern route which would be a groomed snowmobile path. Undeterred we pushed forth. About a half mile later we came to the old parking area and the trail signs which gave the distance to Wilcox as 5.2 miles. From here we would breaking our own trail. So far the trail was the driveway to the private inholding here on the bank of East Stony Creek. Now the trail became a footpath and continued to parallel the creek for a short while. Soon after we entered back into public land, the trail veered away from the creek to go around a large hill. This would be a gentle uphill and then down for about a mile or so until we again reached the creek. At this point the creek was flowing west, and since we were heading upstream we turned east. Crossing a small marshy area we entered into a hemlock grove and noted some cut logs and an area devoid of undergrowth. Likely a campsite in the vicinity. Not far after we decided that barebooting was not the way to go so we put on our snowshoes. We had heard this trail was the more picturesque hike and we were not disappointed. 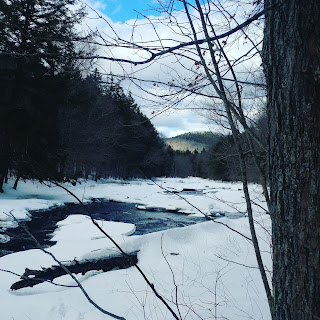 The trail continued to follow the creek for a couple miles and then turned inland again. It would rise up and away from the creek. At his point we were both feeling tired. A decent break would be needed. We hiked on looking for a log to sit on and never found one, so we just tramped down a spot into the hill and sat on my foam pad. A snack break and looking at the map to see how much farther we had. The suspension bridge over the creek had an established campsite near it, so we could always stop there if needed. At this point it seemed likely. Knowing sunset was around 6pm we decided that we would see how far we could get, but by 5pm we needed to start making camp. The trail headed back down to creek level and it was a short mile to the bridge. Just after the bridge was a significant climb of about 3/4 mile to intersect the snowmobile trail and then another quarter to Wilcox Lake. It was quarter to five and we had a mile to go. We ditched the campsite and pressed on. I was running on adrenaline only at this point. The climb switched back and forth a bit, and wasn't as bad as I anticipated but still tiring. Saw a tree with a lot of bark chewed off of it about 8 feet up. I queried a moose but Dan corrected me to the more likely suspect a porcupine. Once at the snowmobile trail, we turned right and headed downhill to Wilcox Lake. There would be only a little light left by the time we got to our lean-to about a quarter mile down the lake so our first order of business was to collect firewood.

At the lean-to we grabbed the saw, put on our headlamps and went wood collecting. A decent pile was soon gathered. We opened a beer and sat by the fire. A little while later dinner was cooked. As tired as we were, we still stayed up to almost 10pm. 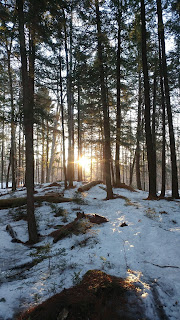 As usual I was the first to arise. I restarted the fire and melted some snow for coffee. My muscles were sore from yesterday. It was good we didn't have to travel today, just enjoy. After breakfast, we collected more wood and took inventory of the roofing supplies. After lunch we decided to go hike across the lake towards New Lake Mtn. The peak was prominent and it looked like a bare are just below it might provide a nice view back to Wilcox Lake. We headed into the woods and towards the ridge which we would then follow up to the open area. A lot of deer sign along the ridge and some oak trees. At the opening, Wilcox Lake was quite visible. 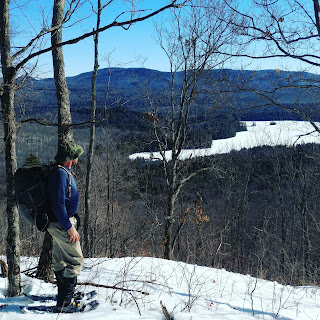 We could see the top of New Lake Mtn from here. The steep rocky section was all that was left. Soon we were at the top standing upon a larger boulder at the summit. Instead of retracing our steps back, we continued North towards New Lake and down the other side of the Mtn. It was steep and the snow was deep. I wrenched my knee on one of the steps down. It made my going slow and painful on the descent. At about 100 ft above New Lake, we held the contour around the Mtn until we were heading South again. Then followed a drainage almost all the way back to Wilcox Lake. It was still earlier than yesterday and we didn't have to collect wood so we were much more relaxed.

The evening ensued in a relaxed fashion. We ate dinner. Watched the stars come out.went to bed a little earlier than last night. We anticipated tonight to get rather cold.while it did get cold, it was warmer than I expected. Since we had pushed so hard the first day to get here, we figured it would be more enjoyable to hike out part way today, make camp and then finish the rest tomorrow. Less miles meant a later start and a relaxed pace on an already broken trail. First a stop at the other lean-to to take measurements and photos for Jim. The trail out was much easier now. We didn't need snowshoes as our track was solid enough to wear boots with microspikes. We were at the suspension bridge in no time, and shedded our last layer as it was another warm day. Looking at the map, the campsite we passed the other day in the hemlock grove seemed a good place to make camp. It would be only a couple miles more to the car in the morning. We arrived around 3 pm, plenty of time to get set up and gather wood. Dan used some of the gathered wood to make us a bench to sit on by the fire. There were two heavily used deer trails here. Dan suggested that some day he should go on a hunt and I could then meet him the next day and help him carry out the venison. The evening of our third day turned to night and we retired to our quarters. I slept soundly in the hammock.

Day 4 would only be a few miles out. After breakfast Dan explored the game trails, and I dismantled the bench and scattered the wood and ashes from our fire. I camoflaged the firepit with some rotten logs. The day was already getting to be warm. the snow turned mushy and we finished the trip back in snowshoes. Back at the car before noon. 4 days and 19 miles.