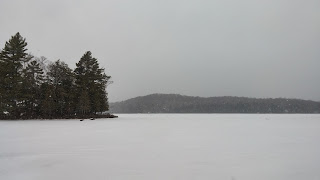 After this past Thanksgiving Weekend trip to Long Lake, I knew I needed to spend more time along its shores outside of the busy boating season. I somewhat expected snowmobiles to be riding the lake this weekend. Perhaps they usually do, but the recent warm temps might have made over-ice travel inadvisable. Other locales had experienced thin ice accidents recently. So I headed out to Hidden Cove Lean-to about 2 miles down the NPT.

There was little snow on the trail but I carried snowshoes anyways, just in case. The trail was icy with a light layer of fluffy snow. I had left my crampons in the car, so I donned the snowshoes for the traction they provided.. I made it to Catlin Bay quite quickly. I carefully crossed the inlet stream on the ice bridges. I was very tentative due to the recent warm weather. I stopped at Catlin Bay Lean-to #1 just to take a break and read the shelter log. I made my entry and noted a few others from the NPT Chapter and was on my way.

While the tread was obvious along the trail, it was also obvious no one had been here for a while. Boot marks had filled in with snow and the only tracks visible were mine and the animals.

Just me and the wildlife in the #adirondacks. Squirrel tracks and his lunch leftovers. pic.twitter.com/iy68LXmmNT

I was enjoying myself so much I walked right past the unmarked trail to Hidden Cove. I didn't realize my mistake until I got to the stream crossing a quarter mile past it. I turned around and headed back. The “official” unmarked trail was a little farther back, so When the lake got back into view I headed towards it and intersected with the approach trail. I noted potential firewood gathering spots as I hiked in.

At the lean-to I flipped through the log book and began my entry. It was early afternoon and I had the rest of the day and night all to myself. If the snow machines were going to be out on the lake, I surely would have seen or heard them by now. Instead it was just me and the solitude of the lake. I unpacked a few items and went to gathering wood. It didn't take long to get a small pile for the next morning squared away. I set it aside and prepped the rest. I took breaks here and there since I was enjoying the calm day. Now and again snow would begin to fall. The real light fluffy kind that barely covers anything but looks pretty. I checked out the lake ot see if it would be easy to get water. It seemed quite thick. There was a crack near shore which showed at least a foot of ice. The light fluffy snow on top was easily brushed aside to reveal hard clear ice. Would be great for skating. As is my rule when I am solo, I do not venture on the ice ever.

Quiet solitude on Long Lake in the #adirondacks. pic.twitter.com/QVGZ1p0GyK

I found some decent sized downed beech and maple so I brought hose back to camp. Between them and what I had previously gathered, I would have enough wood to get by. It turns out I had more than enough and left a good supply for the next people. I had a late lunch of hambuger potato soup and some cocoa. I wasn't very hungry but I knew I should eat something. I never did eat my dinner though. There were some word search books on the shelf, so I wasted a few minutes doing a page. I read “The Call of the Wild” out loud. Service's poetry was meant to be read aloud.

I went to bed just as it was starting to get dark. One of my favorite things about winter solo camping is the shear quantity of sleep I get. I tossed a bunch of the bigger logs onto the fire and climbed into my hammock. I could see the fire from my hammock if I turned just the right way. I was soon asleep. I awoke once during the night and tossed a few more branches on the fire. I was awake before the sun. I restarted the fire and melted some snow. Having coffee as the night becomes day is such an amazing experience especially when in a place like this. I thought about those longer distance trips I do in the summer when I do the same thin; have coffee and watch the sun come up. On those trips, I have already hiked a few miles. A couple of mergansers flew by, some making their grunt sounds. I thought they only did this for alarming of predators. Perhaps the coyotes were still around.

The hike out was uneventful. Mostly uphill, but only two miles. My snowshoes were loud on the ice and snow. I stopped quite often just to listen. I thought I heard voices at one point, but this was not likely unless it was carrying from across the lake. There were fresh footprints though. The trail register recorded a group 5 day hiking yesterday. They had signed in to go to Catlin Bay, but appeared to have gone almost to my campsite. I wonder if they missed my tracks when I turned off the trail. The car thermometer read 27 degrees. A nice quiet 24 hour trip into the woods.