As Cold as Ice -Kelly's Point 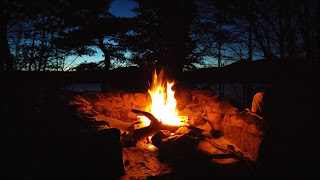 For the second trip in a row I would be heading back to Long Lake. I would be leaving the deep snow of home to a few inches in the Adirondacks. It is usually the reverse. The first day temps were forecasted to be a high of 19*F with a nighttime low of -6*F. The sky would be clear all day and through the night explaining the low temps. The second and third day would be above freezing. I dislike having to pack for trips like this as the cold weather gear is way overkill for the warmer temps. I brought my pulk and snowshoes just in case there was enough snow.

Arriving a late morning the temps had risen to about 11*, so I geared up my sled and strapped the snowshoes on top. I wore microspikes on my boots. Since the last time I was here only a few people had signed in to the trail register. None going further than Catlin Bay. Downhill with the pulk is very easy. A few blowdowns were easily bypassed. I paused at the inlet stream by Catlin Bay to gauge the ice. There were a few places downstream where water could be seen through a crack. Testing each foot with my poles I crossed with ease. I could hear how thick it was by tapping the metal point of my pole on the ice. I paused at Catlin Bay to grab a quick snack and read the shelter log. A couple had signed in writing in their native tongue, but I could not tell what language. Only another 3 miles to Kelly's Point. My only concern was crossing the stream just after Hidden Cove. I figured if I could not find a way across, I could go back to Hidden Cove.

I pressed on and after slowly descending the steep decline to the aforementioned stream, I could see it was frozen. Still not wanting to tempt fate, I crossed upstream where I could minimize my contact with the ice. My crossing spot was dotted with rocks and “islands” instead of a giant solid sheet. A few more blowdowns and another sketchy crossing and soon Blueberry Mtn came into view. I had contemplated climbing this and/or Kempshall Mtn tomorrow as something to do during the day. But who was I kidding, I am a flatlander. Especially when solo. As I left the view of Blueberry, Kelly's Point came into view. There are two-lean-tos at the site of a former Hotel/ Camp. The remnant foundations and stone staircase are all that remains. I set up camp and began to collect wood. There was little snow near the lean-to so I would have to collect it from farther away. I had enough water left to make lunch, so I did that first. I cooked up a venison sausage but opted against having soup. After lunch I gathered more wood. I planned on staying all three days here. I also filled my sled with snow from farther away to use as a water source.

Unlike last trip, the snowmobiles decided to use the lake. First it was a lone sled heading north with quite a bit of gear dragging behind. A few hours later a line of 6 sleds headed the same direction. These 6 would return after dinner. One had engine trouble right across the lake from Kelly's Point. For dinner, I had some jambalaya and added an andouille sausage. I made half of the stew and some hot cocoa. The temp was already dropping. The sky was clear allowing for some stargazing. As is typical for me, once the sun sets I am ready for bed. I try to fight it as long as possible, especially in winter due to the long nights. The night was still... and cold.

I awoke before dawn. Warm and rested. I restarted the fire and went back to my hammock to sit. I soon snuggled back into my bag and fell asleep. I re-awoke after the sun had risen. I defrosted my food for breakfast instead of taking the easy way out and making oatmeal. It took longer, but was worth it. Bacon, sausage, and cheese on bagel with coffee. A lot of fat to stoke the internal furnace. It might have warmed to about zero degrees by then.

After eating I walked over to the other lean-to to read the shelter log. A corner had gotten wet and so the pages were frozen together. Not wanting to tear it, I could only open it a little. Just enough to read one entry from the ADK trail crew's work last august digging new holes for the privies. The desire to climb anything today was gone, so instead of sitting around I figured I would break camp and go back to Catlin Bay. This would allow me to save some time the next day. I stopped at a few tent sites along the way and made lunch at Hidden Cove; the second half of my jambalaya. No one had been there since my last visit. I was back to Catlin Bay in the early afternoon. It was already considerably warmer than the previous day. 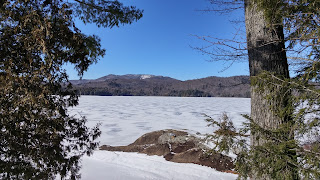 I gathered wood and water and took a short hike to the other lean-to on the peninsula. According to the shelter log, no one had been there since our trip in Thanksgiving. I find that hard to believe. More than likely people just didn't sign in. back at the other lean-to I prepared dinner and the winds started to pick up. A few drop of rain between the winds provided contrast from the previous night.

I again awoke before dawn, but this time went right back to sleep. I think it warmed up over night. I had the same breakfast as yesterday, but more coffee. I cleaned up and loaded my sled. There was about a half inch of fresh snow, it was wet and sticky. It would clog up my microspikes. Like walking on glue paper. It was only a mile back to the car, but mostly uphill. I warmed up pretty quickly. Took off gloves and hat before reaching the trail register in the late AM.