The Call of the Wild -Chase Lake 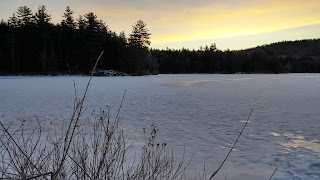 A last minute getaway to the woods. The wild is calling...where to go? Looking at my to-do list, Chase Lake in the southern Adirondacks has a lean-to I haven't visited. Plus the trail is gentle enough for me to test out the repaired pulk. Hiking companion from this past summer, Ben, joined me. I picked up Ben at 6am and we headed out. The forecast was for high in the 20's and overnight lows close to 0. No precipitation expected contrasted with the storm hitting the eastern seaboard. We would be in the Adirondacks and getting no snow, while Washington D.C. would get almost 2-ft.

On the trail at 9:30am with the temp in the mid teens but rising. Trail was broken out by snowshoes and bare boots. The snow wasn't deep but the crampons on the snowshoes would provide great traction. The first mile of trail went easy through the mixed hemlock forest. The snow crunched under our shoes. Even though it was in the teens, I could feel myself heating up already. I had on my pack and was also dragging the mostly empty pulk. I tried to remember to keep drinking water. I have a bad habit of not drinking enough water in the winter. The beginning of the trail wound its way around private land before following an old woods rd towards the lake. After 1.6 miles we reached the junction to the old lean-to site. We headed down the newer section of trail which was a nice meander through the woods. Gentle ups and downs with a few small stream crossings. Easy with the packed snow. The lake began to come into view and we continued along the trail as it headed down towards the lean-to. 2.6 miles covered in an hour and a half with a few short breaks.

It was just about lunch time, so Ben set up his gear and had a bite while I headed up the hill to scout for firewood. I found a nice spot with plenty of wood in the area and began to collect. I carried down a few long sections to camp and returned up the hill with my pulk and saw. I had the pulk half full when Ben arrived to help out. He took over the cutting, and when the sled was full I brought it down to camp. Back at the top I finished cutting what was left and we brought the next sled load and a few other branches down. It was plenty of wood for our needs.

I gathered some tinder and got the fire going. While it grew I set up my sleeping arrangements. We had the rest of the day to lounge around, and eat. We checked out the lake which was quite frozen. Too thick to punch through for water, so we would be melting snow. In the later afternoon we were visited by a gentleman named Vince and his Black Lab. Vince had skied in just for the day. Vince mentioned in was 19 degrees when he headed down the trail. He went down to the lake and then headed home. While sitting in the lean-to looking out over the frozen lake I commented on just how perfect it was. No matter what is going on back in civilization, right now here was perfect. Ben mentioned how others don't understand why we would do this. They don't understand how enjoyable sitting in the woods in the middle of winter can be. It isn't something one can explain, only experience. I commented about my favorite poem, Call of the Wild by Robert Service and how many of his writings captured these types of experiences. Well, even though the days are getting longer, dark still comes early. We would have close to a full moon to provide significant illumination throughout the night. The clear sky also foretold the temperature drop we would experience.

I fell asleep early and only got up once in the middle of the night. In the AM, I tried to stay in bed as long as possible but soon my bladder won that battle. Ben was already up and heating water for coffee, the moonlight had still not given way to the sun. I started a warming fire as Ban poured me some hot water for coffee. By the time the fire was going the sun began to light up the eastern sky. I went down to the lake to watch the sky change colors.

We packed up in shifts between breakfast and sitting around. We were still on the trail around 8 am. It was still rather cold and the sun was glistened off the snow. The crystals refracted the sunlight and the snow sparkled with greens and blues. A few reds and yellows could also be seen. Unfortunately the camera could not capture the effect. Continuing on I took many short breaks just to listen to the silence and gaze into the woods. The hike back to the car went just as quickly as the hike in. There were two more cars in the lot when we arrived. According to the trail register a group was heading to some cliffs to do some ice-climbing. Another great 24 hours in the woods. I suppose I should quote some Robert Service as a few lines from Call of the Wild were quite apropos.

“Have you known the Great White Silence,
not a snow-gemmed twig aquiver?
...
Then hearken to the Wild -- it’s wanting you.