To Olmstead Pond and back 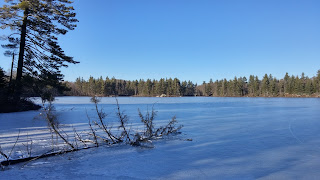 A last minute trip, and the final destination was decided to be in the 5 ponds wilderness area. I had spent considerable time here a few years back, but have neglected to re-visit until now. I arrived in Wanakena late Sat AM and was soon on the familiar trail. The trail register showed no one, and with the temperature in the teens going to a low in the single digits overnight, I didn't expect very many people. The old rail grade passed quickly. I noted the drainage culverts put in a few back seemed to be doing their job. I stopped to visit some of the campsites along Dead Creek flow and to watch some otters playing in the portion of the lake which was no longer frozen. I figured I would have lunch at Janacks landing. As I approached I heard some voices. There was a couple just finishing their lunch at the lean-to. They were just finishing their morning day hike which included part of the Dobson trail and a bushwhack. They were the lean-to adopters for this lean-to. We chatted a bit about the 5 ponds region and the ADKs in general as well as lean-tos and stewardship. Turns out I was talking to Neil Woodworth and his wife Holly. Neil is the Executive Director of the ADK. We walked back to the junction together and parted ways. I had about 3 miles to the next lean-to (Cowhorn Pond), I figured I would have my lunch there.

The trail was just as I remembered. It never ceases to amaze me how much detail about a trail makes its way into our memory. The side trails I intended to explore, the hills I intended to climb, yet still haven't. I had been following some tracks in the light snow. I was not sure how recent. As I approached Cowhorn Junction, I would realize just how recent. A group of three were backpacking the CL-50. Neil and Holly had mentioned that the CL-50 has seen a huge growth in the use of the trails in this area. I shared pleasantries and my destination with the backpackers and headed down the esker. I was getting hungry. I took the turn to Cowhorn and made my way to the lean-to. I read the shelter log as I ate. The log book mentioned the boat Justin and I had paddled with the shovels a few years back. Some of the comments even mentioned using a shovel as a paddle. Noting the boat was still there and these are good trout waters reminded me of another intention of mine in this area.

It was a quarter to three and I had about 3 and a half miles to go. I was again following in the footprints of the backpackers ahead of me. I wondered if they would make it past Olmstead. This section of trail was high on the ridge. Quite possibly another portion of the esker. I had only been on this portion of trail once before and from the other direction, so this was new for me. I heard the sound of water off to my right, so I took a slight detour to see if there was a waterfall and to fill up my water bottle. I made my way to the sound of rushing water to a small stream cascading into the larger outlet creek of Cowhorn Pond. I still had about a half mile to my next junction. This section is long and straight and feels longer than the 2.4 miles. At the junction the sign says a half mile to Olmstead, but that is to the pond and not the lean-to. I had about a mile to go. Arrived at the lean-to to see it empty. I gathered some wood, just enough to have a dinner fire. I pushed myself to stay up as late as possible, but with the long day and it starting to get cold I crawled into my hammock.

I only got up once in the middle of the night. The moonlight was reflecting off the scant snow making the area bright. The temp had certainly dropped. I quickly climbed back into my warm cocoon. I awoke before the sun although the sky was beginning to lighten up. It was really cold by now. I decided against making breakfast and opted instead for a quick packing up and eating something as I hiked. I paused creekside as the sun was cresting the horizon and made some coffee. I carried it as I hiked, I didn't dawdle looking around as I wanted hike myself warm. At Glasby pond, I stopped for a break and a snack. I listened to the lake making ice. Always an eerie sound. By now the day was beginning to warm up a bit. The last 4 miles would go quickly. I just hiked. I wondered if the Olmstead Pond I stayed at was named for the famed park architect Frederick Olmstead? I checked later. No.