In the "Middle" of the Wilcox Lake WF

Another trip with my good friend Justin. After some deliberation we decided on Middle lake in the Wilcox Lake WF. I had not been here in quite a few years. The last time was as a day hike after a lean-to rescue trip with Dan. Prior to that I had only been here two times before. Justin's truck was at the parking area and he was signed in. He let me know he would wait at the Bennett Lake turn-off. The trail was hard packed so micro-spikes were all that was necessary; and they WERE necessary. This old tote road becomes sheets of ice in places. I recalled this from my las trip as well. My new spikes were a bit tight putting on. I was used to my old worn out pair I guess. Heading down (or should I say "up") the trail I made good time. Much better than in snowshoes although they were strapped to my pack just in case.

I saw Justin's pack on the trail before I saw him. He was just coming back up from Bennett. We hiked the rest of the way in to Middle talking about different features we had explored in the area. Justin has been coming to this area since he was a little kid, and has done a lot more explorings since. As Middle Lake came into view, we headed off the trail following some old tracks to ther shoreline. We passed by an old firepit with some stacked cordwood. A few more yards and we were on the lake. What a great day. We made our way to one of the islands, then explored the far shoreline. With the prevailing winds we chose a site which we hoped would block most of the wind. Gathered some wood, set-up camp and the like. 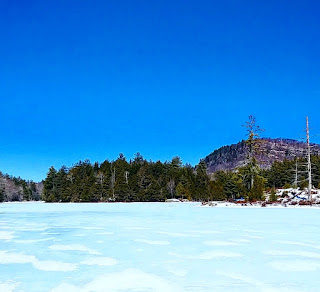 A quick day hike to Murphy was in order, so we headed across the rest of the lake and then caught up with the main trail. We found some nice firewood here, so we left it to grab on our return. The rest of the trail we noted where snowmobiles had turned around due to obstacles. Also noted a side trail to what was apparently a designated campsite. We chose to check it out on our return. At Murph a lot fo memories for both of us came to the front of our minds. We shared a couple stories and read the lean-to register. I had forgotten how short this lean-to was. This was the location of my "I hate lean-tos" trip due to such a crappy nights sleep in it many years ago. 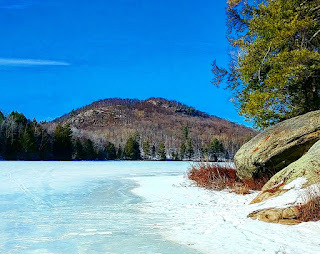 We hiked the perimeter of the lake and then returned to Middle. We looked for the campsite along the "trail" but if it was there, it was buried in snow. Gathered up the wood and dragged it to camp. A nice fire and some beverages with a good friend is always fantastic. Eventually I was falling asleep so I retired to my hammock. It has been a while since I had slept in it, having been bagging lean-tos as of late. How apropos I would eschew the lean-to for the hammock near the site of my "I hate lean-tos" trip. 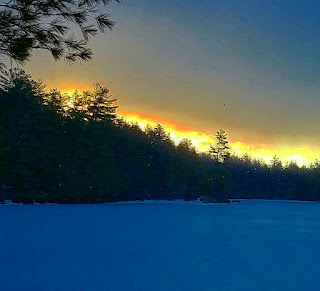 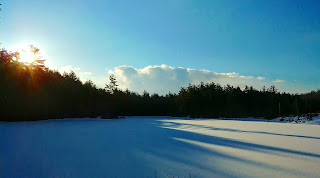 The morning was lovely with the sky ablaze just before the sun emerged from over the hills. Then it snowed. Then the sun came out, then it snowed while the sun was shining. Then just a nice morning, after some coffee and a bite to eat we headed back to our awaiting cars.