End of February Winter trip with rain to Seventh lake

Winter with rain isn't fun. Mostly because one has to pack for both wet and cold. usually winter gear is heavier due to extra clothing but is offset by not needing raingear. So this weekend would have a bit of extra weight. Also due to its location along Seventh lake I anticipated firewood would n ot be easy to procure so I added a stove to my gear list. Plus snowshoes, and micro-spikes. 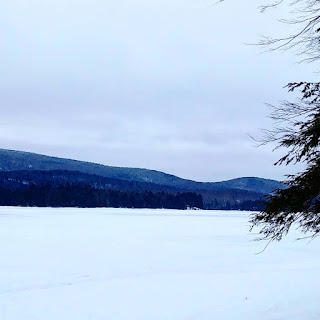 The initial plan was to park at the Bear Mtn trailhead near Inlet and take the x-country ski trails to the Bug Lake trail then the spur to Seventh lake. Knowing the increased numbers at Mtn trailheads we had a few back up plans. As we (Shannon and I) approached the trailhead we could see it had many cars. Unfortunately there was not enough space for one more. So we proceeded to plan B, which was the 8th Lake campground. Unsure of the parking on the seemingly unplowed road, we parked at a pull-off parking about a mile up the road. With our gear loaded up including snowshoes on our packs we walked the main road to the campground. I commented to Shannon how I often find myself doing road walks with her.

At the campground, we followed the snowmobile trail to the start of the Bug Lake Trail. At this point the drizzle was enough to force us to put on some rain gear and pack covers. A few snow machiones came by. Heading up the trail I knew the spur we needed to take was not prominent even in non-winter so I expected a significant bushwhack. As we approached Eagles Nest turn-off, the vicinity of the spur we needed, I consulted the map. The trail junction was near the bridge, but it was hard to tell which side of the outlet we needed to be on. We donned our snowshoes and I took a compass bearing. The snow was crusty on top but soft and deep underneath which made for not easy going. As the outlet began to turn away from the direction we needed to go, I looked for a place to cross. Shannon spied some flagging on the opposite side, quite a distance away. Not unusual. With no easy way to cross, we backtracked up the hill to the trail to try the other side of the outlet. A few steps past the bridge a brand new yellow trail marker was right where it needed to be. A few paces beyond some old flagging was visible. I guess this was the trail and it was recently marked, although not broken out. We followed the flagged trail which had a few markers, we counted six total for the next mile. Travel was not easy in the snow until we reached the last quarter mile where someone had come up from the lake and broken it out. From here it went quickly to the lake. We found our lean-to empty, so we made camp and relaxed a bit.

There was some split hardwood in the lean-to. A nice gift, but I would still need a bit more. Not a lot, just enough to melt snow and have some campfire tv. We collected wood, made some soup, played jenga. I was tired. We didn't come far, but it was hard miles. The rain subsided and we had a nice little fire. We made it to hiker midnight before we retired.

As usual, I was up early. I tried to sleep in as much as I could. Some coffee and an easy breakfast before we re-traced our steps back to the car. As we passed through the campground there were a couple cars parked. So I guess we could have parked there. We needed the extra miles though as this plan B was already shorter than our original. Great trip even with the rain.