Four Days in the Tongue Range 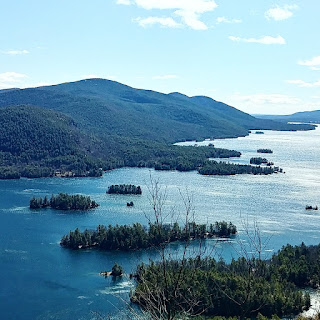 Dan and I had been planning this for a while. Neither of had ever hiked this range but we heard it was nice. No ponds for fishing, so finding a window to hike it without interferring with Dan's other pursuits was small. There are two lean-tos which I will need to sleep in for my own personal challenge. We decided to do this as an easy 4 day trip so that we could enjoy it and not race up and down the peaks. We met at the parking area from which lean2rescue used for the repair on Five Mile Mtn. Left my car, and then drove to the northen parking area to meeto some friends who would be day hiking with us.

It was cool to see Mark and Jen again as it has been a while. Mark's wife as well as two other friends of Mark's (Paul and Jean?) would also hike with us. The day was very nice and the trail not too  wet for the season. We have seen much worse. We first checked out Deer Leap as well as some other spots along the way. Had a quick lunch back at the junction and then headed up towards Tongue Mtn lean-to where Dan and I would be spending the first night. The others hiked with us to just past Brown Mtn where we had a second lunch. Fromn there Dan and I continued to the lean-to. Like usual we first gathered wood knowing it was likely the weather was going to turn on us. Water procurement was going to be tough. We would gather from some vernal pools and boil or from some remnant snow fields. We tag teamed dinner with beans&rice and bratwurst. I carried 3 beers, one for each night. I suppose we will see how much self-control I have. 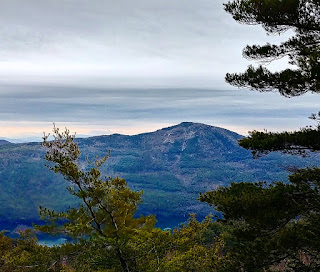 Some rain came but not too much. We knew that a significant system was on its way. We had discussed the previous night whether we should just hunker down here for the day and wait it out or get going immediately. Since the weather was still not too bad, we figured we could start early and get to Five Mile Mtn before the storm. It wasn't very far and a quick radar check showed we had till just before noon before the system was to hit us. Was a nice morning to hike even with the knowledge of the impending storm. Some nice overlooks along the way and then the turn off to the lean-to which is basically at the summit. We heard some voices as we approached the junction and a couple had just come down from the summit and was continuing South. They did not notice us. At the lean-to a small group was just readying to leave. Whew! We thought we might have to tent/tarp through the storm and more importantly I would have to come back to sleep in the lean-to some other time. 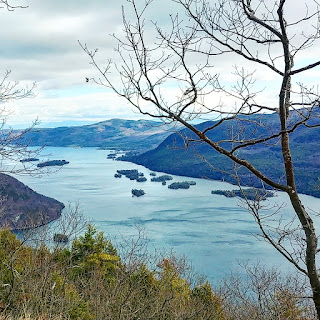 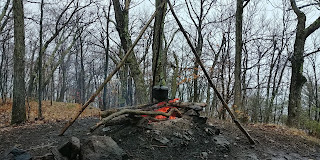 As the group packed up, we went wood gathering. We stowed a lot under the overhang to keep it dry. So far the storm has not come. A few sprinkles here and there and winds were picking up. Whenver the weather would cooperate we would steal another look over the lake. Someone had left an MRE and lean-to so we shared the contents and packed out the packaging. We laughed at just how much plastic packaging is used in one of these. Made for a good first lunch. Eventually the rain came a little more steadily with the wind. But I think we were up to high and were basically in the cloud. More rain was at the lower elevation. Had one more beer and saved the last for the next day. During the night though the winds really picked up. Some intense gusts which roused us from our slumber. 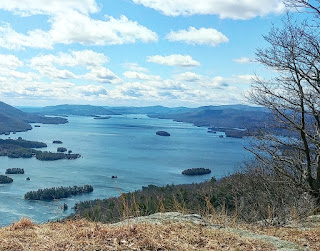 Our third day would be a longer one, but not that far really. The toughest part would be the elevation change, the downhill part, I would really feel the downhill in my knees and ankles. The day changed from overcast to some clouds with the sun poking through. We savored the views all along this stretch. After the long descent from French Point, before heading up to First Peak we crossed a drainage which combined the flows from two rivulets. Good water, best was upstream.  A first peak, the clouds were dispersed and the sun really warmed us. We took a much longer break here. I had one been left for the night, but this seemed like a perfect spot for it. I asked Dan if he had a cup handy and I shared it with him. We only had a few miles to Montcalm point but did not know of any designated campsites so we would likely be finding a place off trail. The 1200 ft drop from here was killer on my ankles. Cool rock scrambles though. The winds from the west were really pounding Northwest Bay. This would decrease our site selection opportunities. A few spring heads allowed us to fill water bottles as we descended. As we approached our next junction we noted some flagging to the East. We didcided to see where it went. Up and over a small rise and a firepit was spotted. the flagging continued around another rise towards the private cottages. We figured the flagging was for the cottages to find their way easily to the main trail. We continued down the trail to the junction and the boat launch (day use area). Also checked out an unposted cabin with a 3-hole outhouse. This property also had ano old lean-to which was filled with rotting mattresses. Cabin seemed to be in well kept shape as did the boathouse. We split up to look for a designated campsite. Not having found one we went to the established site which was just over 150' from the trail so it was legal. Also we had options for water. The winds from the west were really kicking so this site was perfect being on the leeward side of the rise. Firewood was plentiful. Dan set up his tent, and I my tarp. I brought a small hammock, but with the winds, I chose to pitch the tarp low and behind a downded tree as an extra windbreak. Tonights dinner was my responsibility; pesto tortellini with mushrooms. Was nice and filling. The winds calmed down as the evening wore on so it was nice to sit around the fire for a bit. Eventually it was bed time.

I tried to stay quiet as I restarted the fire and got the water on. Oh, the firepit was big and I made a ginormous tripod. It was overkill to say the least. Leaving the poles behind would be good firewood for the next folks. Was a beautiful day to hike out. We only had to round the southern end of the tongue and then work our way back along the northwest bay to the five mile mtn trail and our awaiting car. About halfway back, we spotted an organge bucket in the water. There was quite a bit of debris that has washed up. the bucket was in great shape. It was emblazoned with "Fish'n Bucket". Dan attached it to his pack to use at home. We also spotted a neat campsite just off trail. Had some log benches and tables and a sign "Rachels campsite". Passed by a two other groups heading the opposite direction as we got close to the car.

Even with the storm, we had great weather. The storm came at the perfect time and the cool weather made hiking nice. Only a few bits of snow here and there and the trails were not muddy except where the trail coincided with a runoff stream. The woods were very pretty to walk through. Glad we finally did the Tongue at a slow pace to enjoy the woods and stop at each overlook.