Some of the Lean2Rescue folks were gathering at Preston Pinds again this year to do some work for the Open Space Institute property. We were all meeting at the parking lot at 11:30 to load up pulks and break trail together. On the drive up I noticed a car with a few pulks on the roof rack. I wondered if it was one of us. As I pulled into the Stewarts parking lot to fill up the tank my suspicions were confirmed. We talked a bit as we waited to check out. At the trailhead we loaded our pulks and had lunch. Dan put his extra gear into my pulk and took the first shift. Sans pulk, I took the lead breaking trail (after getting to Henderson Lake).

The snow was not as deep as last year, and a couple skiers were ahead of us. Their trail did not make our path much easier but their route finding was a time saver. At the first stream crossing, the skiers used the bridge while I found a spot just upstream. A small step over a weak part of the ice would be necessary. This hole would widen as the group passed. The next crossings were more solid. I took breaks regularly allowing the pulks to catch up as there was no need for me to be so far ahead. Breaking trail was significantly easier this year. Even the grand uphill was not as bad. I did spend some extra time leveling out the major dips to ease passage for the pulks. Nearing the height of land, one skier told me to go on ahead. Soon after I caught up with the other. They would turn around at this point. Now I would be finding the route as well as breaking trail. The rest of the way was almost completely marked by deer prints. At Preston I waited for a few of our crew. I noted this was the first time arriving at Preston in which the wind was not blowing straight at us. It would be a pleasant hike across the pond. 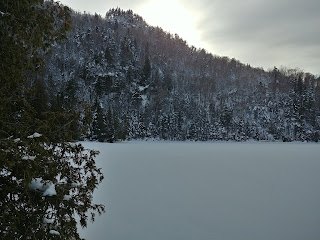 At the property, I stomped out a path to the outhouse, while pete made a path to the stream for water access. By now almost everyone had arrived. We setup camp and relaxed. I was in charge of dinner, so I got things going. The 7 pounds of sausage from Swans had slightly frozen on the hike in. We had german sausage and sauerkraut (homemade by mike). Like usual there was a lot leftover. The rest of the evening was spent hanging out.

I was not the first out of bed. That prize went to pete, who prepared the hazard trees for felling. The sound of the chainsaw ensured everyone else was awake in short time. Some worked on preparing breakfast using last nights leftovers, and some went to work on the first tree. The rest of the morning was spent bucking and splitting the wood to be stacked for future use. As late morning approached I joined george and tammy in trekking to duck hole with the goal of delivering the log books to CR#1&2. Was a nice day, with a little precipitation. George and Tammy led the way on skis. I kept up mostly because they were breaking trail. We crossed Preston and took the short portage trail to lower preston. This was my first time on lower. As we approached the outlet I could see open water ahead. We would need to climb into the woods and then skirt the side of the outlet to duck hole. I took the lead here to break the trail in the deep snow to climb up into the woods. After two steps in deep snow, I felt it giving way. As the snow and ice disappeared below me I turned my body to adjust my weight to be above the snow pack and not the widening hole beneath me. As my body slid into the snow,I was now at an angle in which I made swimming type motions to keep myself from sliding in completely as well as create a flatter spot to which to roll up onto. I do not know how I remained as calm as I did. This was my first time breaking through the ice. When I was secure enough (meaning not sliding in anymore) I began to roll myself away from the now slush filled hole. Once at a safe distance george gave me a hand standing up. For safety he had brought a rope in case we needed it. Fortunately the situation did not warrant its use. The water at this point was not very deep, but I did not know it at the time. Quite an experience. I was glad I did not panic, and executed the movements I knew I needed to do. Having gone through the mental exercise before was probably very helpful in preparing me.

At this point we realized the rest of the trek to duck hole was not in the cards. So we found a lunch spot and rested a bit before heading back. While chatting I reminded George that next month would be the 10 year anniversary of the Bear Lake lean2 build. Regardless of anyone else, I plan on going.

G&T were consistently ahead of me on the way back using our broken path. I enjoyed the scenery as well. As I arrived back to camp the other folks told me G&T said I fell through the ice and they left me there. For some reason I knew they would joke about it. Another huge dinner was made, again with leftovers. I was one of the first to hit the sack, a few stayed up quite late.

Pete and I were the first up again. We started the coffee and made some eggs. Others arose at various times. Half would be staying another night while the rest of us would be heading out. It was a bright sunny day with a few clouds. I had forgotten sunscreen and would pay for that mistake. I took a few photos while on Preston and made my way back. A group of skiers on Henderson were heading in to Preston for a day trip. I chatted with them briefly before the last little bit back to the car. 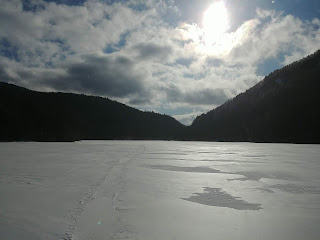 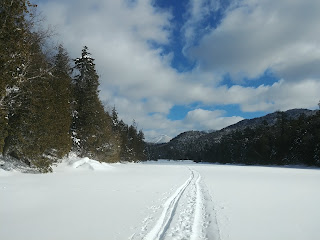 My plan was now to go to Raquette Lake, Big Island. This would make my drive Tuesday much shorter by half. I stopped at Stewarts and purchased a bag of wood knowing the island sites on busy lakes can be quite picked over. Justin had warned me about ice conditions on Raquette. When I saw all the snowmobile tracks on the lake, I had no concern. Plus I already broke through the ice once this trip. I found the island campsite on the eastern edge easily. Made camp and gathered more wood. There was plenty if one walked far enough into the woods. I also noted a lot of areas where deer had bedded down in the immediate area. I made a late lunch, gathered more wood and relaxed. Being Monday afternoon it was rather quiet. A few snow machines would zip by at a distance. As the sun set I could feel the temperature drop. The stars were amazing. It would get chilly overnight. I saved enough wood so that I could have a small fire in the morning. Being solo, I was in bed earlier than the previous two nights. 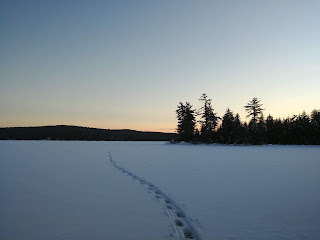 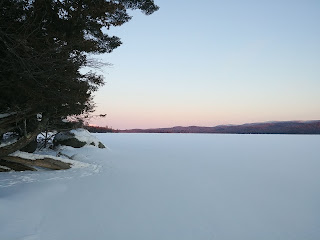 It did get colder over night, not uncomfortably though. I made a warming fire and some cocoa; I was not super hungry. Some snow was falling and the winds were picking up. I wondered if I was going to have to navigate across the lake by compass again this year. I packed up putting my compass around my neck just in case. It was bright even with the weather making visibility of my tracks slightly difficult. I could have put on my sunglasses but didn't. The wind seemed to ebb, so I took off a layer as I was getting too warm. A couple snowmobiles waved as they went past me. 45 minutes later I was back at the car. Thedriving home was slow with the road conditions. I was glad I did half the drive yesterday. Plus I got to stay in lean-to #87.