A trip planned with my college room-mate was increased by two other backpacking friends, Rob and Kalie. I have been introducing Jeff to the sport after 30 years and brought Rob out of retirement. Along with Kalie, these 3 friends have never met. We started in Wanakena along the old road bed. The mosquitos were already out in full force. It wasn't long before we hit the first wet section. It looked worse than it was. The trail later detoured around the large beaver swamp. I remembered this was getting worse over the years. The detour also used part of an old trail I was always curious about. It wasn't long before we arrived at the Janacks Landing junction. We headed to the lean-to to take a short break. As we approached a small group was just heading out.

After a short break, and the first half of my lunch we continued towards the CL-50 junction. At one point Kalie saw the retreating end of a small bear. Rob missed it, but said Kalie's expression was like a kid on Christmas morning. Soon we were at the junction. New signage here since last time I came through. We climbed the short rise to the Glasby outlet cascade. A lot of brush growing in here. Passing by the trail to the hunter's camp and other spots brought back memories of previous trips through here. One of which was my hike of the CL-50 back in 2008. A lot has changed on the trail since then most notably all the trail work to mitigate wet spots. The campsite at Glasby was widened too. We paused here and looked up and over the pond to the ledges on Cat Mtn where we were headed.

At the junction for Cat Mtn, Jeff and Kalie dropped their packs for the climb. It was only 0.7 miles, but it had some elevation change. Rob took the lead and I followed. As we approached the ledges the group from the lean-to was also there. They asked if I could take a photo for them. After they left, we had the summit to ourselves for a short period of time. Another group soon arrived. They asked which area was the Oswegatchie River. We took out our map and pointed out a few things from the overlook. We then packed up and left them to enjoy the summit.

Our campsite was not far past the junction where Jeff and Kalie retrieved their packs. The site was on Cat Mtn Pond and from the waters edge we could see the cliffs we were sitting atop not that long ago. The bugs were bad, especially away from the water. So while the other three set up camp, I put together a smudge fire.

The breeze and smoke helped alleviate the pests. We hung out and talked. For dinner I had brought bratwurst for the group. However I was not going to cook for them. Everyone got their own "hot dog stick". The evening was full of us joking around about Rob's three prong design and how we were going to market it. Good times hanging out by the fire. I stayed up later than I thought. When I eventually went to my hammock, I was asleep in no time. 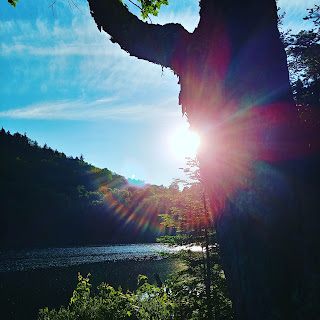 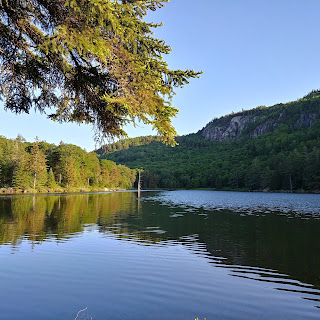 I awoke after a fantastic nights sleep to the call of a loon. I tried to get a little more sleep afterwards but soon I was completely awake. Both Rob and I were mostly packed up before Jeff and Kalie arose. We had our coffee and talked quietly. It wasn't long before the other two were up. I set out the fixins for breakfast sandwiches. We did not hurry the morning as we only had a short 6ish miles out.

When we did hike out, Rob took the lead and cleared all the spider webs for us. We passed by a few other hikers and the Asst Forest Ranger. Back at the cars, Kalie demonstrated using an emergency car starter as her battery had apparently lost most of its juice while she waited for us the previous day. In the end it was another great trip bringing together three friends to a spectacular part of the Adirondacks.