Memorial Day weekend each year I usually do the Cold River loop around the Seward Range. This year I had a 4 day weekend so I opted to access the Cold River from the NPT and then continue to the Northern terminus. I sent out some invitations to fellow backpackers and quickly had a group of 4.

We met at the Averyville Rd parking area Friday morning. My car and Jennifer's were left there as Kalie (blogger stalker 😎) and Shannon shuttled us to the Tarbell Rd TH in Long Lake. As we loaded up our gear the black flies swarmed us. We didn't dawdle and hit the trail. With 8 miles for the first day in a misty rain it was a good distance for the first half-day of hiking. The trail to Plumleys was relatively clear of blowdown. There was some, but it has been worse. Shannon and Kalie were out in front and I hiked with Jennifer. The stream crossings were not easy due to the spring rains. On one of the later ones, Jennifer slipped and stepped right into the stream I caught her before she completely went in.

At Plumbley's, Jeff had kayaked in. He welcomed us to the site and I went to gather some wood to add to his pile. Great conversation ensued as well as a nice fire. Jeff set up his hammock, while the four of us shared the lean2.

Like usual I was up early. I tried to stay in bed as long as I could. I restarted the fire nd made some coffee. The rest of the gang eventually arose. Jennifer said she was hurting and was going to turn back. Kalie offered to go with her. Thanks Kalie. As I packed up, I noticed a large tear in my backpack. One of the seams had torn. I did a quick field repair hoping it would last the next 28 miles. We were expecting rain in the afternoon but at present the weather was delightful. After saying goodbye to Jennifer and Kalie, Shannon and I agreed we needed to make our miles early so as to get to camp before the rains. This portion of the trail is rather easy going. Much of it on old woods roads. A lot of pretty spruce forests interspersed between the hardwood and swampy sections. We took a few short breaks. One at a vly, another at Cold River 4 (I went to check on #3 as well). The shelter logs were both gone. We stopped at Big Eddy and went out to the falls. 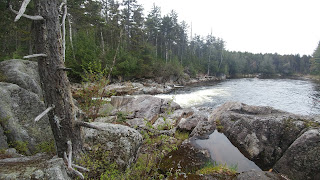 We also stopped at Seward lean2; another missing shelter log book and a pile of trash in the fire-pit. Mostly kleenex and toilet paper, yeach. I made a twiggy fire to burn it. About a mile before Seward Brook and the Ouluska lean2, a few drops of rain began to fall. It was very light and we didn't put on our pack covers, nor rain jackets. Seward Brook was high, the washed out bridge was wet and slick. We would have to wade. I took off my boots, hiked up my pants and stepped into the cold stream. At the deepest it was at knee level. Not bad, just cold. At the other side I didnt bother to put on my boots I just continued the 75 yards to the lean2. 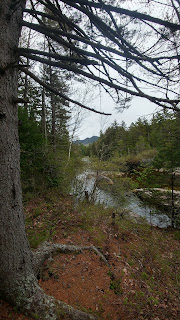 It began to rain a little harder and stopped at times. During the breaks I gathered wood. The spring run-off had washed up quite a bit of driftwood at spots along the river. Oh. the Ouluska shelter log book was gone too. I started to think it was not a coincidence. We both slept in the lean-to. It rained quite hard overnight. Again I was up at first light. I tried to stay quiet and let Shannon sleep in. Today would be the longer miles day, but weather was supposed to be favorable. We also had the option of stopping early at Moose Pond. 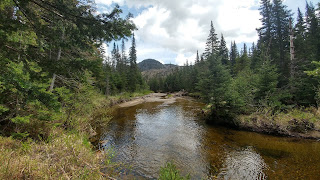 I love hiking along the Cold River. Lots to see, and enjoy. We took a short break at Rondeaus hermitage and at the Roaring Brook lean2 (another missing log book). The section north of the bridge to moose pond was typical; wet, rooty, muddy, and full of blowdown. A long break at Moose Pond which was also missing its log book. By now I was convinced this was purposeful. We checked out the plane wreckage as we approached the Wanika Falls junction. Crossing the Chubb to get to the campsite at Wanika was a little tricky with the high water. We dropped our packs and went to see the falls. A lot more water flowing since the last time I was here. 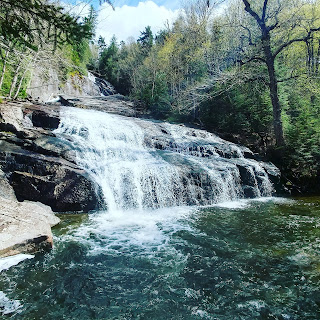 We set up camp, and gathered wood. Shannon was on a mission and gathered a boat load. I started a smoky fire to shoo away the bugs. They had not been bad since the initial swarms at the parking lot. With my late lunch, I wasn't terribly hungry. So I waited a little while before I made dinner. We had done 30 miles so far. Not bad for three days. It gave us a lot of extra time at camp. We both were in bed early.

It was colder the last night. Likely due to being so close to the river. I was up before the sun. I got the fire going again and warmed up with some cocoa. We only had 6 miles to go so we were in no rush. Our typical start time had been around 9. Today would be no different. We made great time and were back at the car by 11:30. I shuttled Shannon back to her car in Long Lake. Coincidentally a friend of hers was at the trailhead parking area. So were the black flies. Seems like that one area was the only spot they were a major problem.