For quite some time Eric (RevYJ) and I have done thanksgiving in the woods. It started years ago as a solo adventure, then Ian joined in and then Eric. Since then, Eric has been a stable partner. Others have come and gone. This year, Kalie and her brother would be joining us. This would be the second year in a row for Kalie. Eric commented that no one ever joins us for a second trip! As the date got closer, Eric and I traded emails as to logistics. The menu etc... has been almost standardized the last few years. We must have miss communicated a little as Eric was waiting at 6am for me, and I arrived at 7am. If this was out only issue for the trip, we can call it a win. With the car loaded, we dropped off little megan at Al's place to watch for the weekend. The temp was in the 20's but would be dropping as we traveled North.

The final mile to the trailhead was on a seasonal road, and since there had been considerable snow we drove slowly staying (mostly) in the tracks left by earlier vehicles. The temp was 12 deg F. The posted sign had Wolf Lake at 3.0 miles. Our map had it as 3.9. The trail had a little snow, enough for the pulk but not enough for snowshoes. We were on the trail before noon.It was well marked, almost to the point of ridiculous. The trail was gradually uphill skirting rock formations and small streams. The first obstacle was a flooded beaver section. As usual the problem is also the solution. With the snow it was difficult to see where to step. Eric led the way, took it slow. Once across it was much quicker for me to follow with the pulk. At the other side we wondered if the upstream beaver dam might be better for the return trip.

Soon after the beaver dam, and old woods road came in from the left and the trail turned onto it. A few minutes later Eric paused as there were no markers. We had been chatting and not paying attention to the trail. We doubled back about 50 yards to find where the trail spun off the old woods road. Back on the well marked path we continued on. The forest changed quite a bit, a few small climbs but mostly rolling. At one point we are atop a small ridge covered with white pine and oaks. The winds swept across it reminding us of the cold temps. A few blowdowns along the way cause me to detour with the pulk while Eric could just step over. Some private land marking appeared to the left giving us a clear indication of our location on the map. Only a short way to go to the lake, and then a quick jog around the shoreline to the lean-to.

A little over 2 hours for us to break trail. We dropped our packs and noted the solid lake. Glad we brought the shovel as it took a while to cut through the 2+ inches of ice to get water. We made camp, gathered some firewood and relaxed in the cold. Our standard fare for thursday was hot dogs and chili. I only made half of the chili as eric was only using it as dog toppings. Gathered more wood. when the sun set, we could feel the temp dropping quickly. It was expected to get close to zero over night. The moon rise over the lake was stunning; the clear sky a pre-cursor to the coming cold. (When we returned to civilization we would find out it bottomed out at -9°F .) 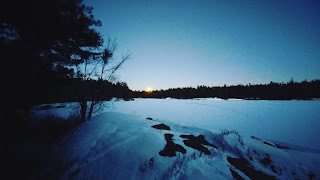 I was warm with my down quilts, but I never sleep well in lean-tos. I would get a better nights sleep Fri night. Up as the sky turned pink before the rising sun, I restarted the fire and opened the hole in the ice. I heard the lake making ice all night, the hole had an inch of new ice to cut through. As the sun rose, it was directly across the lake. I needed to put on sunglasses due to the brightness and glare as it reflected off the ice. 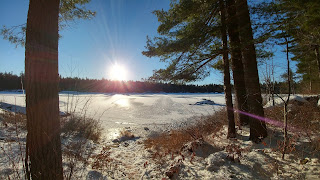 I made some coffee while Eric slept in and moved my gear to my hammock setup for Fri night. Kalie and her brother Chad would be here around 2 pm, so we had plenty of time to take a day hike to Moon Lake. It was a quick jaunt to the lake and a trail to the lean-to was along some high rock ledges along the shore. Quite pretty. We took a short break at the lean-to, and wrote in the shelter log. Either few people write in the log books, or this area gets very little use. I hope to come back in nicer weather and maybe do some fishing at this trio of lakes.

Back at Wolf Lake we gathered up more firewood in preparation for Kalie and Chad. Across a small "bay" we could see where the trail would come out onto the point. Eric and I kept glancing over knowing we would see our companions a quarter mile before they would arrive. It wasn't long before Eric spotted some movement and our friends made the turn off the point. Their hike in was a solid twenty minutes shorter than ours. With them all set up, our second thanksgiving would begin. Turkey, stuffing, gravy, vegetables from the cans of green beans and carrots someone had left in the lean-to. With key lime pie for dessert. We ate like champs. stoked the fire and relaxed. The winds were picking up, as the temp rose. Odd combination but expected from the forecast. Kalie gave me an update on the Saints game from Thursday. We had a good laugh pretending to be the Wolf Lake Curling team. I shoved the ice wafer from cutting the ice hole, as eric brushed the ice with a broom. Hopefully a photo will surface. I was the first to call it quits and went to my hammock. I fell asleep quickly. It was much warmer this night, even with the winds.

I was not the first one up; Chad was already getting the fire ready to be re-lit. A typical lazy morning of breakfast and packing up. Kalie was the last to emerge from her tent. It would rain today, but not until the later afternoon so we had plenty of time. The hike out was much quicker than coming in. The beaver dam was certainly mushier. The temp was closer to the 40s, a good 30 degrees warmer than on Thursday. Back at the car, we changed out of our hiking clothes and headed to Cook's family diner. Another successful Thanksgiving adventure in the books.