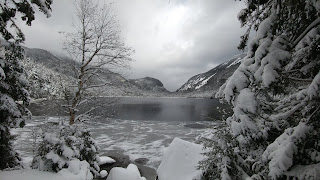 This weekend a number of lean2rescue projects were happening concurrently. As I intended to spend the night in the woods, I chose an on-site project. We would be prepping the site for the Beaver Point lean-to at Lake Colden and if time, removing the old roof from the lean-to. There was significant discussion as to the ingress to Lake Colden. Eventually we would plan to hike in from Upper Works.

On Friday afternoon, I recieved a call from Doug that the crew has opted to come in from the loj, and I could still meet them at the sute. This made it easier as I was not sure if I could make the rendezvous at 8am. I would be leaving Roc at 3am as it was. The firrecast called for more snow and freezing temps. I changed my gear load for a winter trip.

Three am arrived and I headed out. I stopped for coffee twice and filled the tank with gas in Long Lake. I was at Upper Works just after 8am, the plow had just come through. I changed into my hiking gear and loaded my pack. I wasn't sure where I would spend the night, or the next but I figured I would stop by the car for my 2nd days food.

I signed in at the register noting only 2 people were before me heading to a nearby location. It was 8:30, so not too far behind schedule. There were a couple inches of powdery snow on the ground. The first couple miles if trail went quickly, even though it was generally gaining elevation. The snow of the trees and deadened the air, so it was very quiet walking. Every once in a while a big wind gust would kick up, blowing snow from the trees on to me. With the snow on the ground, it obscured the muddy spots. The footprints ahead of me provided fair warning for the worst spots. The trail soon began to gain elevation more significantly. I shed a few layers when I stopped for a snack. The last mile or so to flowed lands did not appear to gain elevation on the map, but it certainly did on the ground. While the first 2 miles went relatively quick, these last few were slow.

I took a break at the Calamity lean-to which was occupied by the two ahead of me. I had jyst over a mile left to my destination. This last leg was not easy. Besides being uphill, the terrain was difficult, especially with the powedery snow. I arrived to Beaver Point and dropped my pack. I listened for voices of the crew assuming they were already there. Hearing none, I set up my sleeping area and then went to look (and listen) for them. Figuring I would eventually find their footprints, I continued on the trail. As I rounded the bend I saw flagging tape. I wondered if this was to mark the location for tbe new site. No footprints, no sounds just a quiet brumal day at Lake Colden. 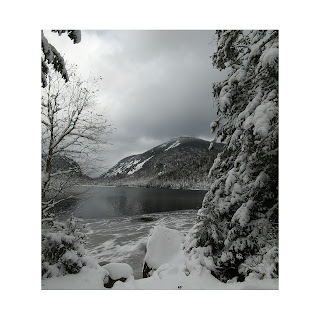 The original plan to start at Upper Works was due to high water levels at Avalanche Lake, making it impassable. Since I was here before the main crew I thought maybe the lake level was still to high for the northern approach. I headed back to my camp to wait and have some lunch. Being in the EHPZ meant no campfire. This was a bummer for a number of reasons, the least of which was I had nothing to do while I waited... usually collecting and prepping firewood takes up a lot of time.

The wind picked up, blowing snow into the lean-to. I was not sure if it was from the trees or new snow. I erected a small tarp to block both from getting on my gear. I added an extra layer and sat down behind my wind/snow break. I was tired, but made sure I did not fall asleep as I knew it was going to be a long night.

A few hikers passed by as they bagged some peaks and returned.By the time 4pm rolled around, I was certain the crew did not make it. I had a cold dinner, and bundled up waiting for the sun to set. Lake Colden was just beginning to freeze up, and with the temperature dropping would certainly be making more ice over the next hours. I was hoping the skies would clear so I would have a chance at the Taurid meteors known for higher than usual fireball activity. As dakness descended, the clouds remained. Unlikely meteor viweing, but it would not get as cold. I lit a tea candle and placed it into my cookpot as a "mini-campfire". I was asleep before the candle burned out. 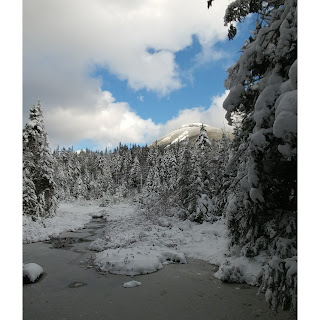 The next morning was not as cold as expected, but still below freezing. The lake had considerably more ice. I was packed up and on the trail a little after 7am. I paused at one of the other lean-tos on my way back to see the view (not as nice as from Beaver Point) and a group of three were there packing up. They had also come in from Upper Works. I guessed they might have been the voices I heard pass by the previous afternoon. I was given a hug by one of them, he had everybody deserves a hug every day. They were from different areas; Saratoga, Rochester, ...

The hike out was quick as it was generally downhill. The slowest portion was navigating the big rocks as the snow made them quite slippery, so going around them was time consuming. I passed on other hiker on his way in. I was surprised how few cars were in the lot being a long weekend. I suppose folks were dissuaded by tbe weather. Usually this area, and Lake Colden in particular xan be quite busy. I pretty much had it all to myself. And it was pretty.

Needing a campfire, I pondered the indea of stopping at a lean-to on the finger lakes trail or just camping in my own woods. The latter won out. Emily was glad as she hadn't been feeling well.