The annual trip to ONeil flow lean-to on the NPT for the Geminid Meteor Shower was to occur close to the full moon. So even if we were fortunate to have clear skies, the likelihood of seeing meteors was slim. But we went anyway, as the celestial events are just an excuse to go hang out in the woods. Any meteors or stars, etc... are just a bonus.

As the trip approached, the forecast showed diminishing temperatures and possible hazardous driving. Many people dropped out for a variety of reasons, most not due to weather. The night before, a weather advisory was issued. I sent a message to the other two who planned on joining me that the trip was still on, but could be canceled if the driving conditions warranted it. None of us were worried about being in the woods during a snow or the cold, it was the roads that worried us.

Saturday, early morning showed a little snow, but all warnings would be over by 7am. I let the others know I was heading out. I met Kody at 7am, and we both drove together to Blue Mountain Lake where we met Bill at 10:45. Donning our snowshoes and packs we set out along the NPT northbound towards Tirrel Pond. The sun was shining although the temperature was in the teens still. There was only about 6-8inches of snow. Some blowdown along the way. And the creek crossing were beginning to freeze up solid. Even with the low temperatures I was warming up quickly hiking through the snow as we were generally going uphill. At one of our many breaks (we were in no hurry) I reprimanded myself for not wearing my sunglasses. The sun reflecting off the snow was not fun. I did at least remember sunblock.

As I walked around one of the trees crossing our path, Kody opted to duck under it. From there on he would lead. We crossed the frozen streams and soon were at the turn off to the lean-to. But first we would need to cross on a narrow two-log bridge spanning the outlet. Side-stepping in snowshoes is slow, and I took each step deliberately. We paused at the pond to catch the view. Just then it started to snow ever so lightly. The haze this created over the lake in conjunction with the whites, grays, and dark greens of the lake, mountains, trees and cliffs was breathtaking. We would often walk back to this spot over the next 24 hours just to take in the view. 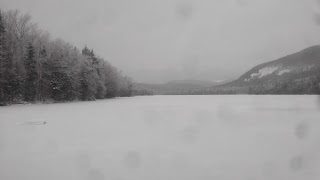 lect firewood. With three of us it went quickly and we soon had plenty. Although we joked we would run out. After the wood was all broken down, or cut with a saw. I placed a small pile beside the lean-to to be for tomorrow morning. We got the fire going and set up our sleeping gear. The sun was at the edge of the hillside, so we knew it would be getting dark soon , and the temp would also begin to drop considerably. We ate, we drank, we laughed and added more layers. When dinner was over, we loaded the larger logs onto the fire. The moon began to rise behind the lean-to and the first stars became visible. Venus and Mars also made their appearance known. We headed down to the beach area to look up at the sky. I was significantly colder here by the lake than by the fire. The sky was beautiful and provided a grand accent to the view during the day which was now illuminated by moonlight. We stared upwards for a short time but soon opted for the warmth of the fire. No meteor sightings, but we joked about telling Diana we saw a bunch. Diana was planning on joining us, but came down with the flu. She was bummed about having to miss it. A couple more times during the evening we would come to the beach to look skyward.

Not sure how late we actually stayed up, but it couldn't have been that late. The fire crackled for quite some time during the night. Each time I awoke for brief moments, I could see the dancing glow of the fire within the lean-to. It certainly got cold, my sleeping bag was zipped up almost all the way. It was till dark and Kody's alarm went off. I suppose he forgot to turn it off from yesterday. I posited 6am out loud. Kody replied 5, time to go back to sleep. So we all did. The first to eventual emerge was Bill. He restarted the fire which had a good amount of coals. I went to get water from the hole I cut in the ice previously. I had to cut through almost an inch of new ice. We had listened to the lake make ice all night. With water in the pot and fire it the pit, coffee and cocoa would soon be had. I also cooked up a leftover bratwurst.

All cleaned up and packed we set back down the trail to the cars. The sun was beginning to shine again. There was a dusting of fresh powder in our tracks. No idea of the time, but it was early still. Made it back quickly and at the trail register was the forest ranger. He had seen our cars as was just checking the register to see if the people who had signed in were overdue. Since it was just us, he asked about the snow conditions, and blowdown. With a quick report we all walked back down the trail to the vehicles. Car was slow to start. It was only the high teens and 10:30am. We waved goodbye to Bill, and headed to the diner as both Kody and I had burgers on our mind.