Every year I try to schedule trips with meteor showers and other celestial events. This year's Genminids coinciding with a new moon providing an opportunity for a good show. A few people had expressed interest in joining me. With the weather not looking to great, all but one dropped out. Kalie would be the only one joining me. We met up at the Newcomb Lake parking area. There were a few cars there. One gentleman was getting ready for a day hike. We talked for a short bit.Kalie and I loaded up our gear and headed down the old carriage road. It was pretty easy walking, generally uphill so it would be much easier on the return trip.

We stopped for a short break to look at the old farm ruins and the upkept buildings like the creamery etc... A giant erratic was near the road on which someone had put a "smiley face" in the snow. Next to it I wrote "kilroy was here". After about 3 miles the gentleman from earlier was returning from the other direction. He mentioned there were footprints heading down the trail towards the Fish Rock lean-to which was our destination.

At the turn off, we had about 1.2 miles to the lean-to on the trail. Following the footprints ahead of us made it easier to navigate although a few times "he" apparently lost the trail momentarily. The one mile to the lean-to tuen seemed to take longer than expected. The trail was a little rough, obviously not used as much as the main carriage road. At the turn, we saw the footprints head to the lean-to and also return and continue down the trail. We surmised he checked out the lean-to and then was continuing around the lake. It was a good little drop fromt he trail to get to the the shoreline. The lean-to was in great condition and in a very nice spot. So far we had beaten the weather. Rain was supposed to come this afternoon so we were glad to have made it to the lean-to before it started. 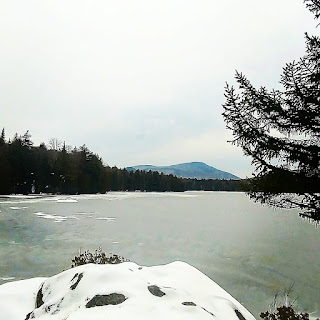 After a quick set up of our gear and a rest in the chairs left at the lean-to (complete with cupholders) we went on a firewood run. After a few trips we tok a break. I would go on a few more runs every once in a while. Made a decent fire, and still the rain did not come. We hung out by the fire all afternoon with only breaks to go for more firewood. The sun set early, still without rain. Made our dinner and tried to stay up until hiker midnight.With the overcast there was no chance of seeing any meteors. Kalie did hang up christmas lights across the front of the lean-to though.

During the night some rain and snow fell. Not much, but enough we could hear it on the lean-to roof. In the AM the air was damp. I was up early and re-started the fire. After breakfast we lazed around and packed up. even with the lazy morning we were back on the trail quite early. Since we hadn't had much for precipitation we expected today to be bad. There was a slight drizzle every now and again on the hike out. Most wetness came from brushing up against the undergrowth. I was glad I wore my rain pants, although I was getting quite warm. When we reached the junction of carriage road we dropped some layers. The hike out was uneventful, we paused again at the old farm. Back at the car while we were packing up, the gentleman from yesterday drove up for another hike. he asked us about the rain. We told him we got very little. He reported that Newcomb had a major rainstorm and was thinking of us out in the woods. We were lucky. Though in the lean-to we would have been quite dry regardless.

So a nice easy trip into an area I had never been. Beautiful lean-to location for my #100. Glad Kalie was along to share it with me.