With 3 days to play with and having already been to the Cold River twice this year I made sure I also visited a new spot. Saturday was an easy hike in to Streeter Lake in the Aldrich Wild Forest. This would be my first time in this area making me one more step closer to backpacking and spending the night in all 48 different Wilderness and Wild Forest Areas in the Adirondacks. The hike in was quite easy following the CP-3 route. I noted a side trail soon after the initial rise going towards towards the lake as the main trail veered away. I would find out later this was a shortcut through the old potato patch. As I continued on the CP-3 route other signage for snowmobile trails intersected the trail. Quite a few different camping options in the immediate vicinity of Streeter Lake including the lean-to. The mowed field and lean-to area had a tent and an occupant, Chuck. He was awaiting the rest of his family who would be arriving on Sunday. They have been coming here for years. He gave me a lot of info on the area and allowed me to camp nearby. Due to Covid we stayed our distance but had a good time talking all afternoon and evening. Two family members arrived just before dark; they were expected around midnight. Soon after I retired to my hammock. I was up at dawn and hiked out taking the shortcut path through the potato patch. Will come back for sure to spend some time exploring.

An hours drive later to the Corey's Rd trailhead to find it already overflowing at 8am on a Sunday. Most were probably leaving today. I did find a spot in the main lot as someone must have just left. Signing in at the register I noted pages of people had signed in today. Mostly day hikers for sure. I had about 15 miles to do and gave myself plenty of time to get to Millers Falls and check on the lean-tos along the way. I stepped aside for a small group coming the other way. Then a few miles later a scout troop looking a little weary also came by. I chatted with the SM briefly. There were doing the circumnavigation loop. Good for them.  I stopped at Calkins Brook for an early lunch and checked it out for G&T. For me solo it is a quick hike to here even though it is 6 miles. I then climbed the hill and kept a lookout for the spring to fill up my water bottle. It is always a bit farther than I remember. On the way out I will need to remember to time it. 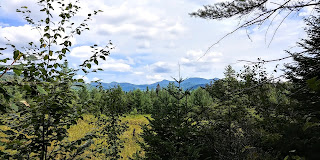 There is beginning to be a significant amount of blowdown clearing and side cutting needed for some sections approaching Latham Pond. Took a short break for thew view of the Sewards as I passed Boulder Brook. This is often a rest spot for me in this area. The small path off the trail for a good view is getting a fair bit of use now. I recalled having morning coffee here at one time. The flooded section just before CR#3 had a herd path through the brush to avoid walking the through the muck. CR#3 was nice and clean. I had carried in a log book, but it seems G&T had brought one the last time they were here. I figured I could cross of the name on the one I carried and put it into one of the other lean-tos. After a short break and reading the entries I was off to CR#4 a quarter mile away. A little bit more trash here and the old CR#3 book somehow had made it here. I figured some folks might have been confused as to which lean-to was #3 since they do not go in order on the river. I am sure they thought they were being helpful. Anyway, I changed the name on the cover and wrote a quick note. It was only 3 miles to the Seward lean-to and it was barely 1pm. Even with taking two long breaks I was making great time without trying. As I approached Millers Falls I spotted a tent and hammock set-up in the camping area. The lean-to was oddly vacant. I went out to the river to get some water and the two folks who were set up nearby were sunning themselves up above the falls. I did not see them at first until I was headed back to the lean-to. 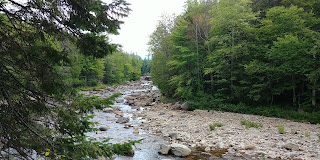 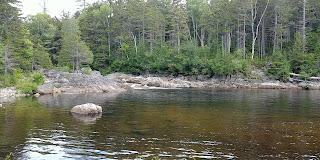 A short while later Susan and John came in from their swim &sun. We talked a while and I set up my hammock nearby. John stopped back at the lean-to while I was having a beverage. I offered him one which he obliged. We talked and he told me about the family's plan to section hike the NPT. They had done some of it a few years ago on the recommendation of another lean2rescue volunteer who happens to be the adopter for the other 2 Cold River lean-tos. I made myself a huge dinner and went to bed not long after it got dark.

Even with "sleeping in" and a slow start I was moving by 8:30am. Said farewell to Susan & John and made my way back. Saw a couple thru-hikers along the way. Offered them early congratulations and recommended Wanika Falls for their final night. A long break at CR#3 to watch the sun light up the river. The morning sun reflecting on the river and rocks sparkles like gemstones. As George wrote in the log book, this is probably the best view from a lean-to in all the Adirondacks. 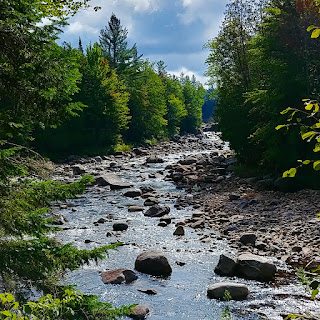 As I was readying to leave Susan & John arrived. They asked if the could take a photo of the Seward Steward. Susan jokingly asked if that is why I adopted it; for the name. I chuckled and said no, but that is a clever name. I retraced my route in stopping again at the spring and Calkins lean-tos for lunch. Back at the car by 3pm.