Canada Closed so St Regis it is.

Due to pandemic our annual canoe trip to Canada was changed to a shorter trip to the St. Regis Canoe area. It has been ten years since I visited with my father. As we pulled into the paring area it was filled with cars. A popular area, but for a Sunday we were still a bit surprised. One spot was open right near the portage and register. We parked and unloaded the canoes. We would each be paddling lightweight solo canoes. Another paddler was loading up his kayak and mentioned the lot was full from a group of 15 day paddlers. The portage was only a quarter mile so we didn't spend too much time really balancing out our loads.
Once out on the water we headed to the northern shore planning on getting a campsite first then exploring. We were a bit surprised the first site was open, so we took it. First lunch, then set up camp. We then hung our food and set out to explore Pink and Little Pink ponds. The outlet of Pink was a little more grown in and the beaver dam I remembered existed as only submerged remnants. Took a look at the tent spot I recalled being brand new a decade ago. In the in between years it has seen a little use, but being in a crappy location probably only used when all other options were unavailable. 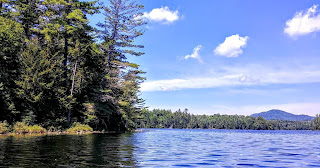 The channel to Little Pink was just as narrow as I remembered up to a newer beaver dam. Stepping out and pulling the canoe into deeper water allowed us to make it all the way to Little Pink unlike a decade ago. We fished the pond catching some bass, perch and chub. Pretty little pond. On our way back we fished Pink. Right out of he gate Dan landed a pig of a smallmouth. I continued to get small ones. Dan caught another good sized smallmouth. We now had enough for breakfast. On our way back to camp Dan saw a splash and tossed out a popper which a largemouth readily took. Back at camp I got the fire going while Dan prepped the fish for the cooler and readied dinner.
Monday morning made camp bread to go with fish for breakfast. Today would have a ling portage and a couple little ones. We first carried to Slang Pond to fish a little knowing we probably would not have much time on our way out on Friday. It was quite breezy so fishing was a constant battle with the canoe being blown around. I spent more time exploring the shoreline. Back at the carry we hid the cooler to grab on our way out since we would not need it any more. The 1.4 mile portage started off very nice on a soft piney path. Soon it hit the flooded beaver section I recalled from years ago. Removing portage yoke, a quick paddle across and we were back on the nice trail. For a while I thought to myself this portage trail is nicer than most of the Adirondack backpacking trails. Then the muddy rocky section began. With all the dry weather it was not bad at all. It was apparent alot of work had been done placing rocks as steps over the years. The next couple ponds would be shorter carries. We had lunch across the pond right after I stepped out of the canoe into a deep spot filling my muck boot with water. Grrr.
Dan would fish the small ponds and I went ahead to secure a campsite on Little Long Pond. The sky was becoming more overcast as the day went on. At Little Long the mosquitoes were awful at the put-in. I loaded up as swiftly as I could. Spotted a few canoes heading out of the Pond towards Fish Pond. As I paddled towards the narrows two other paddlers coming the other direction pulled up on shore at one of the campsites. I paddled past and headed to the unmarked carry over the esker to Little Fish Pond. This carry was steep. Tough going up and even tougher going down. Not finding a site on Little Fish I checked out the outlet for a ways until the current picked up. I headed back to Little Long. This time I double carried over the esker. The sky was getting cloudier. The couple had left the campsite so I went to check it out. Not great, but we needed something. I set up a tarp in case of rain and then went to the portage to Lydia. The campsite here was a bit nicer but in the woods and most likely buggy. I headed back to camp. Minutes after getting back in the canoe the sky opened up. I pulled under a tree near shore and put on rain gear. Back at camp I waited for Dan. The rain subsided and soon,Dan arrived. We shared our tales and we set up camp for good. Had to gather wood from the far shore. Stored some under the tarp for the morning. A little rain off and on. Subsided long enough for dinner which was nice.
Big storm over the night. Some bright flashes of lightning, but it stayed quite far away.  Again rain on/off in the morning. Ate breakfast under the tarp. Dan would fish the small ponds here while I paddled ahead to hopefully get one of the lean-tos at Fish Pond. The carry was quick although hot and buggy especially with rain gear on. Once in the water at Fish the rain came again. The first campsite was empty, but I headed east towards the inlet and lean-to. It appeared I was alone on the pond. Surpisingly I found the lean-to empty. I headed across the lake to check the other lean-to when I spotted another paddler. Not wanting to lose the spot, I turned back and secured our site. Gathered firewood and made a smudge fire. As the day went on the sun began to fight its way through the humidity. I dried out my tarp in the open area near camp. Dan arrived and we set up officially. He had checked out the Lydia campsite and said I made the right call yesterday. The sun eventually won out so we paddled a bit and Dan fished the deeps. I checked out the inlet and the shore near the cliffs. Dan pulled in a 22 inch laker which would be dinner and breakfast. Looked towards the north for comet NEOWISE but the horizon was obscured by the trees on the esker across the lake. 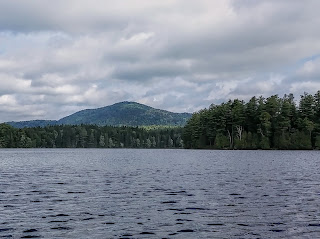 Plan for today was just relaxing. We were spending another day on the pond. I talked to the family at the other lean-to and they said they were leaving. They offered for me to put some gear in the lean-to to "claim it" which I did. Paddled back to camp and packed up. When the family departed we set up our gear. Dan fished more, we day tripped to a tiny pond with a little used portage trail. I checked out the cliffs. Back at camp we swam a bit. I took a post lunch nap. Great day paddling and relaxing and exploring the area. We seemed to have the pond to ourselves. There were two guys camped at the site between Fish and Little Fish who we would see occasionally. We swam some more. Not being very hungry we skipped dinner and had a snack instead. Sat by the water for a nice sunset. I slept like great.
Another early morning. We had a long way to get back. Two longish portages of 0.9 miles and 1.3 miles and a couple short ones. Took us all day which included some time fishing and swimming as well as a long lunch. The wind was in our face on the main paddle back to the car. Was 5pm before we eventually got back. Drove through a major storm with almost zero visibility. Glad we weren't on the water for that one.
Posted by DuctTapeADK at 9:37:00 PM