Trails? Where we're going, we don't need trails. But will find some. -5 Ponds/Pepperbox

Set out Wednesday morning to the 5 Ponds Wilderness. I picked up Dan aling the way. It had been quite a few years since I have ventured into this portion of the 5 Ponds, and never from this direction. After driving 10 miles on a seasonal dirt rd, we found the trailhead for the unmarked trail system. Parked a little ways back and headed up the trail. Immediately we were greeted with mosquitos. Not long after fording the Middle Branch Oswegatchie did we stop to put on bug dope.

This unmarked trail was part of an old rd. Some recent (illegal) ATV tracks could be seen as well. The trail was wide and obvious spur trails were frequent. After winding around Grassy Pond, we took a smaller spur off the old rd towards Rock/Sand Lakes. The trail was easy to follow for most of the way. A few spots it would disappear into marshy areas. As it approached Rock, we lost it entirely. Knowing we needed to traverse the esker between the two lakes, we bushwhacked to the esker, climbed up and found the trail on its ridge. It was mostly invisible, beung obstructed visually by undergrowth but still followable. Not that one could get lost with lakes on either side.

As we neared the ends of the lakes, the trail dropped off the esker towards Sand Lake. Bear scat was in the area, old though. We took a break at the lean-to. Hung a line with extra food/supplies and continued on to Wolf Pond. Dan suggested we drop off the trail and "cut the corner" to Wolf, saving about a mile. As we got closer to he edge, we found the wetlands. Dan, with his knee high rubber boots would look for beaver dam access, while I headed inland back to the trail. We planned to meet at the Wolf Lake lean-to.

Moving much faster on the trail than the marsh, I arrived at ge lean-to only a few minutes after Dan. Our usual routine of him hanging a bear line, and me collecting firewood happened naturally. A nice spot in a pine forest. Many downed trees scattered about. Some new, mostly older. Some from the '95 microburst. The ily real downside to the location was water access. It was about 75m away, down a steep hill. The morning rains made getting tinder for the fire a slight challenge. Using my knife, I made shavings and feather sticks to get the damp wood going. With a fire lit, we took the opportunity to swim and dry our clothes soaked from the bushwhacking through wet undergrowth.

We had expexcted an afternoon thunderstorm and we pleased to not have one. I ate the rest of my lunch as dinner as well as a little of the venison Dan grilled up.

I slept terribly. Not sure why as I was tired enough. Lean-to #79. Today's plan was to first day hike to Cage Lake followed by returning to Sand Lake to meet Andy. The trail to Cage was easy except for the part which traversed a long old beaver dam. It was challenging due to the tall grasses hiding the deep mucky spots. As we neared Cage, a section of the trail was continuous moose scat. I referred to it as "moosemallows". We joked a little about it, remembering the "moose turd stew" joke told to us by another Lean2rescuer.

Cage lake is a very nice spot. It gets much more use due to its proximity to a private inholding to the North. I will come back here at some point for sure. It was too early for lunch, so we snacked and poked around the lake. Neat shoreline, almost hourglass shaped. There was a nice breeze which kept the bugs away. Pleasant way to spend the late morning. 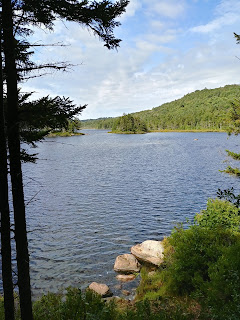 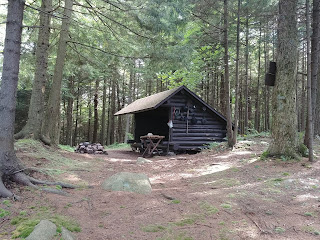 With our fill of Cage lake, we headed back to Wolf to get our gear and go back to Sand Lake. I remembered to get a walking stick just prior to the beaver area to help avoid the deep wet sections. Back at Wolf we had our lunch, still a nice breeze.

Dan wanted to poke around the shore of Wilf a little more, so we planned a rendevous on the trail just west of the lake. I stopped to harvest some chicken of the woods fungus I spotted yesterday. Most was too old, I picked the least old specimens. Hopefully they will not be too dry already. I stopped at Dan's pack which he left on the trail and waited for him to finish his exploration. We then cintinued back to Sand Lake. Based on the time it took us the previous day, I estimated Andy would arrive around 3pm.

Dan took a swim while I gathered some firewood. As I was collecting wood atop a rise, I saw Andy arrive to the lean-to. As luck would have it, 3pm on the nose. I cleaned up in the lake and we hung out for the rest of the afternoon and evening. Our plans for the next day were to bushwhack to Emerald Lake then go back to the cars, and hike into the Pepperbox Wilderness. 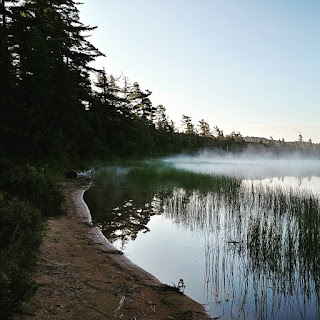 I slept much better in lean-to #80. The 'whack to Emerald waa in easy open hardwoods until it wasn't. As we got close we found ourselves in an open marshy area. It looked easy enough, but the giant carpets of moss were more or less floating. Needed to pick our way close to trees and downed logs. It was sliw going but eventually the marsh gave way to anl scraggily piney woods with Emerald Lake at its edge. With little desire to retrace our steps, we decided to head west to pick up the old rd from which we diverged from the first day. First we needed to get past the potentially wet outlet of Emerald. Fortune was on our side in the form of an old beaver dam we used as a bridge. The route continued through easy hardwood stands until it intersected another old rd which we followed to our navigation target. If someone desired to go to Emerald, this was the route. The rest of our hike would be on the old rd. Easy going with a few mud pits to avoid.

We had lunch at the cars and drove to the Tied Lake trailhead. From here we would enter the "trail-less" Pepperbox. A few minutes down the (gated) road towards Tied Lake, a marked trail veered off to the,left. The maps showed a few old rds in this area all of which could be used to get to Gregg Lake. A few strange intersections compunded by someone tearing down markers (and tossing them into the woods) and Gregg Lake appeared. The campsite was bushy and in the open. We poked around the lake looking for something better. Found the remnants of an old fire ring overtaken by the duff. With nothing better than the bushy site, we set up camp. Using some dead pine ww constructed a bench so as to not have to sit in the blackberries by the fire. After dinner we were in bed before dark. The sky was clear and the temp was already falling.

Got cold last night; in the 30s. Next trip I will have to switch out my gear for fall temps. We were all up early. Not teally sure why as we had a short hike out, less than an hour. As we drove back along the dirt rd, we would stop and check out other pull-offs, campsites, and lakes. We did not do a ton of miles, but it sure felt like it. Plus we got to see and explore some new territory.