It had a few months since Dan and I had hit the trail together. We each had gone our own way on separate adventures over the summer. It would be great to sit around the campfire and tell our stories. While Justin was headed to Metcalf for the weekend, we had three days to spend, so we opted for the W. Canada Lakes wilderness to do some fishing and leaf-peeping. I picked up Dan early Saturday morning and we headed into the woods at the Pillsbury Mtn trailhead. The lot was already filling up, mostly with those hiking to the firetower according to the register. The air was chilly and we expected some rain over the weekend. 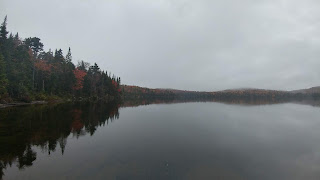 We stopped at the Pillsbury Lake lean-to for lunch. It was surprisingly clean. For dessert I had a brownie and traded my second one to Dan for an after dinner beer later that night. We turned off the marked trail and headed to Whitney Lake. We arrived to the main campsite which was already occupied. A tent was set-up as well as a large tarp with a windblock. The occupants were not around; we assumed they were off day hiking or fishing. Instead of staying at the campsite at the old shelter location, we headed to the one on the other side of the lake which Justin and I had stayed at the year prior. The site was in good condition. There were signs it had been used since we had last visited. With camp set up, we went fishing. No hits and no rises for a while. Then Dan spotted a rise in the water. I cast short of it and hit immediately. Not a big fish, but a nice 9.5inch brookie. while I was playing him, Dan a much larger specimen; a 14 incher. We fished that spot a little longer and Dan hauled in a whopper at 15.5 inches. That would be the end of our fishing. 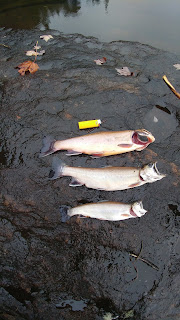 Back at camp, we made dinner and talked. Dan commented how he would probably be asleep soon after dark. I, of course, would also. True to our word we hit the sack early. The rains came over night and into the next morning. Neither of us were in any kind of hurry to get up. Eventually I ventured out of my hammock and restarted the fire. We had set up a large tarp as a communal space in anticipation of the rain. This proved to be worth the effort. It rained a little on/off for the morning. We had fish tacos for breakfast while we discussed our options for the day. According to the lists, Puddle Hole nearby should have trout. So we set off to bushwhack through the wetness to check it out. We split up at the pond to search for a boat. Dan took the north side, and I the south. We met at the far side after 'whacking around the dense shoreline. Neither of us found a boat. The pond was shallow and the shoreline was not even conducive for shore fishing. We took a bearing back to the main trail and then headed back to Whitney. From there we headed to Sampson to also search for a boat.

The lean-to at Sampson is in an unfortunate location perched at a run-off stream. For some reason people also seem to leave a lot of trash here too. A group of beginner backpackers from canada were just packing up after their lunch break. Two ladies were waiting nearby to secure the spot for the night. We told them we were only having a late lunch and would be moving on. We again had no luck finding a boat so we headed back to Whitney and fished our way back to camp with no luck. As the sun was getting low it really illuminated the changing colors. 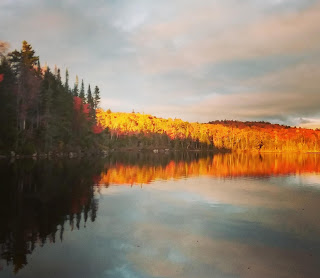 We again went to bed early. The morning again had rain and fog. We checked out the un-named pond onthe other side of camp before we left. No fish were seen or caught.All packed up, we headed back. As we passed through the occupied site from Saturday morning, the occupants were there and we chatted for a bit. Jim, wearing a "Whitney Lake Woods Rat" ball-cap said he had been coming here for 30 years. He told us some history, and we all swapped stories and fish-tales. Jim and JB offered us a beer, so we stayed a while longer and chatted some more. After a second one, we packed up the empties and headed back to the Pillsbury Lean-to for a late lunch and then to our awaiting car.

We had just that one quick flurry of fishing. Quite a bit of rain and some gorgeous colors of the changing leaves. It was good to be back out on the trail with Dan. Next time we will hit a different part of this Wilderness. We are thinking of heading back to the Quetico next summer. A lot there left to explore. meaning Questico and the West Canadas.