I have hiked the Northville-Placid Trail (NPT) a few times now. Most recently with my friend Andy in July. while planning for our adventure, I reminded myself of an idea I had been brewing for a few years. The NPT-west. The NPT was the first project of the Adirondack Mountain Club in 1922, and completed in 1924. there have been some changes to it, reroutes and additional sections. But for the most part it is the same 140 mile "straight" trail between Northville and Lake Placid. Being in western, NY I have an affinity for the western regions of the Adirondacks and envisioned a western arc trail also connecting Northville to Lake Placid. In conjunction with the current NPT, this would create a giant loop (or backwards D). The conceptual trail I have put together is approx 260 miles and uses existing trail corridors. It actually has less road walking than the original NPT in 1924. Together with the current NPT, this would be approx 400 miles, from start to finish (start). There is much of it I have not actually walked, so this trip would be my official start of the NPT-west.

I have 5 days in which to fill with miles. What a better way than to start at the beginning, the end of the NPT on Averyville Rd. I coordinated a ride and left my car at the Burntbridge TH in Cranberry Lake. I would hike the first 60 miles of the NPT-west to where it intersected with the CL-50 and then another 15 miles to get to my car. At 11am, Jack from Broadwing Adventures waved goodbye as I began my trek up Averyville Rd away from the NPT proper. I turned down Old Military Rd and then turned again at the railroad. The next few days I would be walking the unused railroad line. Currently the state is trying to rip up the rails and turn the right of way into a multi-use travel corridor; however it is tied up in the courts. The tracks were overgrown with weeds, which at times made walking through them uncomfortable. Often there was a "shoulder" of some sort, whether it was a foot path or ATV tracks which was a more level surface. A lot of the time was spent walking the tracks themselves. If the ground was level with the ties, it wasn't bad. When it wasn't the spacing was not a typical stride so steps were short and quick. Eventually I got used to it. I never did get used to the 6ft tall mullein weeds which showered their seeds when brushed against. 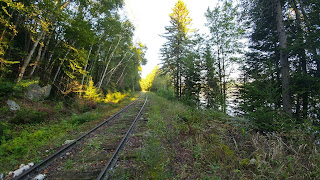 About halfway through my first day, the sky opened up and it poured. It had been overcast and rain was expected, but this front came in and dumped on me before I had a chance to get my rain jacket on (I had prepared my pack with its rain cover). I was drenched walking through the town of Saranac Lake. This all happened just as I had re-found the tracks. There was some bridge construction near the community college and the tracks were all fenced off, so I had to figure out a way around it. Only four hours in and I was dealing with all this already? I supposed it could only get better. The rain subsided soon enough and I continued on past Lake Colby which was my intended camping area to McCauley Pond. There is a small section of state land on McCauley. I found an old campsite, hung my hammock and dried myself out. 14 miles for the day including the drive up. I could hear the camp across the lake as I fell asleep in my hammock before it was even fully dark. 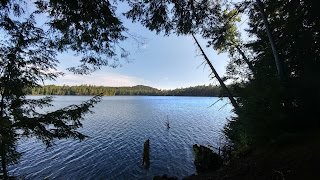 I had sent my itinerary to my buddy Lance whom I have hiked with a few times. There was a chance he would join me for part of this adventure. I also sent him a link to track my progress on google maps as long as I uploaded my position (if a signal was available). In town I could do this every few hours, but it burned up the battery quite fast. My second day of travel would be traversing the St. Regis Canoe Area. A few years ago we had to carry our canoe over these same tracks to get from one pond to another. This time, I would be cutting through the ponds on the tracks. This is a pretty area as the tracks passed by numerous ponds, marshes and lakes. It is also a wilderness area with no cell reception. My last upload for the day would be 10am, after only 6 miles. By 3pm, I had traveled an additional 9 miles to the far end of Rollins Pond. A snowmobile access path led to the water and there were plenty of trees on which to hang my hammock. I spent a little time exploring the shoreline and then headed back to where the tracks were in view. Made dinner and took a woods shower to get rid of the sweat and dust. A sound startled me and I turned around to see someone walking the tracks. He had on a backpack, I called out "Lance?". "Russ?" came the reply. I was not expecting to him until the next day at the earliest. We started to talk and then I said, "go set up your hammock, we have plenty of time to chat". A long quiet evening turned into a welcome chat by the campfire. Unlike the previous night, we stayed up well past dark. 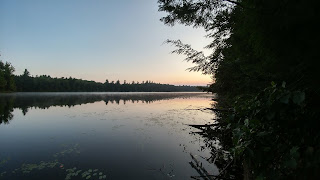 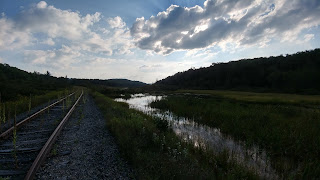 Like usual I was up early, at least I waited until just before day break so I could still watch the sunrise. Lance had been dropped off in Tupper Lake, about 6 miles down the tracks. There is a diner right at the crossing, so we had an easy breakfast and got our giddy-up on to the Lumberjack for a late breakfast. Brenna, our waitress lent me her phone charger so i could get a few extra percents to my battery while we ate. Thank you Brenna! All fueled up, we headed down the tracks. the first mile was really nice, including crossing a significant bridge. After that, it was monotonous. Long stretches of nothing and the walking wasn't easy. Also water was no where to be found. After 9 miles of this (15 for the day) we made it to Mt Arab Rd where Lance's car awaited. I was just about out of water, but the map showed a stream nearby. Lance went to get his car, while I poked around looking for the little stream. Obscured by brush, it was there and flowing nicely. I flagged down Lance as he came by and told him I found the stream and was going to find a place to camp nearby on easement land. After a long break and a full bottle of water, I was restless (it was only 4pm) so I pressed on. The next 7 miles were much easier going. I passed by a few lakes, and some marshes. The tracks made a slight climb as well. Not noticeable while walking, but you could see it if you turned around. A few places the resident beavers had flooded the nearby streams and the water had made its way to the tracks. I did some balancing on the rails a few times to stay out of the wet. A neat thing about the RR is just like highways, they have mile markers so one can easily keep track of pace and location. Before too long Horseshoe Lake was in view and this would be where I would make my third camp. It was after 7pm, so I took a quick bath, ate a cold dinner of trail mix and fig newtons, and went to bed. 22.5 miles, not bad. 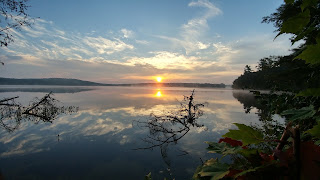 I slept great and was up before first light. I packed up and went to the boat launch to watch the fog lift from the lake as the sun rose. I made coffee and breakfast, chatted with a kid who was paddling his kayak and taking pictures. With the RR track portion of my trek behind me, I headed up the dirt rd. A snowmobile trail in winter #36/7A. The map showed quite a few intersections through this area, so I kept my eyes peeled and followed the map closely so as to not make a wrong turn. At one intersection with a gated rd, a couple of ladies were looking for a specific trail they had seen years before. I had never heard of it, but after some discussion, gave them some other information as to where it could possibly be located. For my troubles, they offered me food, water, bug dope... anything. I said jokingly, "I could use a beer". They replied, we got that too. So with my apologies to the Piano Man, it was 9 o'clock on a Saturday and I was hiking with a beer... The best part of it was it was ice-cold. One forgets how refreshing a cold drink can be after a just a few days. The downside was I had to carry an empty beer car for next 20+ miles. A happy price to pay.

The dirt rd soon gave way to a foot trail just after a gate and a bridge. A campsite (#11) was at the end of this road. I was now walking in the woods for the first time in 4 days. of course the trail headed up hill as pretty much all Adirondack trails do; both ways. The trail was an old woods rd so it was easy going. A few miles later I was at the intersection with the CL-50. This would be the end of my first section of the NPT-west, but I still had another 15 miles to get to my car. I passed a few hikers doing the Cl-50, took a break at the dog pond loop junction and headed up that trail away from Cranberry. I headed towards Burntbridge Pond. I had been here once before, but never hiked the this connector trail. This 4.5 mile connector (3.9 on the map) had always intrigued me. It twisted and turned, went up and down as you earned each mile. It passed by some prominent boulders, likely were used as navigation aides in the past. I noticed one tree which had scars from axe blazes on both sides. I arrived at camp at 4 with plenty of time to relax, take a woods shower, and read the shelter log. Soon after the sun set, I watched the moon rise. It was large and bright orange. The photos would look like a rising/setting sun. Soon it was dark, except for the significant moonlight. I do not remember falling asleep. 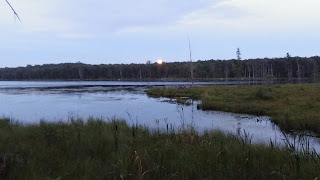 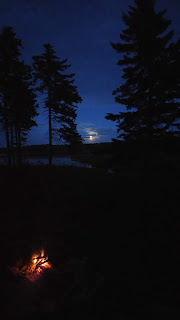 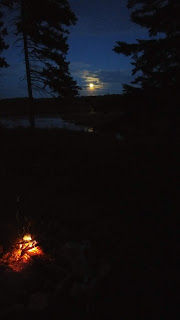 It was dark when I arose. I had my coffee by headlamp. I waited for the sun to rise before departing. Only 6 miles to my car. Moments after I arrived at 9am, it began to rain. Perfect timing. 75 miles in 94 hours. Time for some well deserved corned beef hash and eggs at the Stone Manor diner in Cranberry Lake. 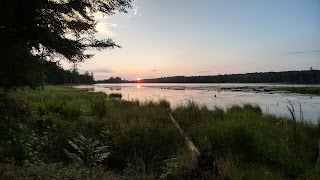