It had been a few years since Justin and I had visited this remote lake in the West Canada Lakes Wilderness. Justin had spent quite some time scouting out the best route. On one of his last trips he exited via a different route. This trip would make the loop in reverse. Our buddy Dan would join us. A remote Adirondack lake with brook trout is too much for him to resist. 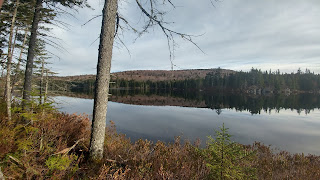 The weather had called for rain all day, so we were expecting the hike to be a slog pretty much the entire way until we arrived to camp. Last minute forecast appeared not so bad. The hike in would begin on an old road and then turn off on an unmarked path for a few miles. As we began, the trail was a slow general uphill. As a weekend warrior, these first quarter miles of uphill always seem to remind me I need to be in better shape. Even with a light pack, made 24 oz heavier with a few cans from Justin. It took a few minutes for us to find the unmarked path as it was not so obvious from the old road. I packed a collapsible fishing rod and reel, as did Justin. Dan carried in 3 poles and his canoe paddle. while it was nice to be backpacking in the Adirondacks without snow again, this particular path was not extraordinary; was still pretty enough though. It is always nice to see the trout lilys and trillium in these early days after the snow has gone.

We stopped shortly at the private cabin along the path and spoke with the caretaker briefly. The path would end soon after and our bushwhack would begin. Once off trail, we would be pushing though witchopple and across the edges of marshes. The terrain was not too bad, but the witchopple certainly was a pain. We paused for a snack at the last vly before regaining a trail for the last bit to reach the west end of the lake. An established campsite was here along with a canoe in very good shape. A small jon boat should also be nearby according to Justin. Dan and I took the canoe and began our way down the length of the lake while Justin walked the shore line looking for the other boat. There was a bit of wind but the paddling was easy. We found our campsite, and I began collecting firewood while Dan paddled back for Justin.

When Dan and Justin finally arrived, I had collected some hard wood from quite a distance away as the campsite is in mostly a spruce forest. Justin had walked a bit more than half the shoreline before the found the jon boat soon after Dan had intercepted him. Dan would fish, while Justin and I set up camp. It was early afternoon and we had arrived at camp with no rain for the day. I considered the trip a win at that point. I made a small fire for a cup of coffee. Dan arrived to set up camp and showed off a big brook trout he caught. Was 15 inches or so; a beauty. Dan set up camp and Justin took the jon boat out to fish. Soon after Dan and I were out fishing from the canoe. we paddled the eastern shore and up to the northern inlet. I landed the second brook trout about the same size as Dan's. We fished and paddled and explored the eastern side of the lake. By the time we headed back in we had 4 excellent fish for dinner. Right across form the campsite along the island Dan would hook and land the last fish, largest of all. Justin was on the island and took a quick video of the fight. This fish ended up at 17 inches, 1 lb 14.5 ounces. At camp we cooked up the 3 smallest trout which was almost too much for the 3 of us to eat. 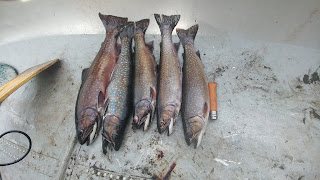 Darkness soon came and my eyes were getting heavy. The early wake-up, the hike, full stomach, and the quiet lullaby of the Adirondack woods was too much. I made my way to my hammock and was asleep in no time. I tried to sleep in, and thought I did as Dan was up before me. As we were getting coffee going Justin remarked from his tent it was only 6am. The woods were bright in the morning glow of the soon to be rising sun. Out by the water, the grasses showed the remaining frost. The chilly morning was sandwhiched between the hot coffee and the warmth of the campfire. I took it all in, while Dan set out for some early morning fishing. The air was still, and the water was glass. I caught a glimpse of the rising sun as it sparkled though the budding branches along the shore. 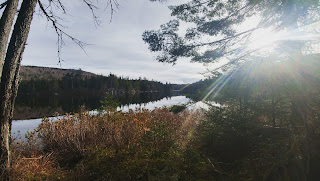 I made some breakfast and packed up my gear in shifts. Justin did the same. Dan fished the morning with not a single hit. As he packed up his gear, I paddled west to return the canoe to where we found it. By now the winds had picked up a bit. Justin was a short ways behind me with the jon boat to give me a ride back to the campsite. With the canoe back where we found it, we looked around a bit more to see if another boat was around and also to look for the USGS benchmark shown on the map. With no luck, we both entered the jon boat and began our way east. We soon realized that our positioning would not work, so we adjusted and each used an oar as a paddle. It was slow going and the oars were heavy. The boat was also returned to its original location near the garbage pile left from the days when float planes used to be able to fly into the lake. From here we would walk the dense shore line back to camp.

All packed up and ready, we left camp around 11:30 am. Mostly bushwhacking to start but not as thick and marshy as yesterday. Also this route would pass by and along some pretty streams and cascades. It was a quieter hike out. I suppose we were all a bit tired. It seemed to take longer, but looking at the time it was about the same. The last 3 miles would be along the old road bed. Easy walking but muddy, and I was tired. The sun was shining; I had remembered to put on sunscreen but probably not enough. Back at the cars we loaded up and congratulated each other on another fine trip.