While planning for a quick weekend winter trip, my buddy Justin and I were looking to use hard packed snowmobile trails to access the interior of one of the southern Adirondack Wild forests. As the weekend approached the weather forecast called for rain. We opted instead to head farther north to a new trail and lean-to in the Vanderwhacker Wild Forest. The forecast called for snow farther north.

I met Justin at the trailhead. He loaded up his pack, and I my pulk. Our friend Bill had sent us a map image of the flagged trail, so we had an idea of the terrain. It was only a few miles in, but the trail would wind around. We had to break trail, but it was not too bad. We went slow enjoying the changing terrain and views. At one spot on the trail, we walked along a small cliff face which was covered with ice. A section of it shone deep blue. It was quite elegant 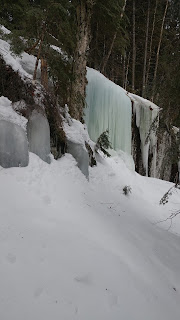 We arrived at the campsite a bit after noon. The new lean-to looked great. It was set away from the lake and was surrounding by a coniferous forest. Plenty of dead and down wood around although it was all softwood. We cleaned out a spot for a firepit since one had not been constructed yet. The lean-to was so new, there was still some sawdust inside and no log book to sign.

We collected some wood, ate a late lunch and settled into camp. Soon familiar faces would arrive; Bill and Lexie strolled into camp. It had been just about a year since the last time I camped with them on North Lake.

The remainder of the trip was just sitting around conversing and enjoying being out. Night came, the new moon provided zero light so the forest was dark. Stars would emerge and then clouds would cover them just as quickly. We eventually made it into our sleeping bags. The temp reading on Justin's thermometer was barely above zero when we finally got up. We lazed around in the morning and eventually packed up. I took the lead for the hike out. Justin added to his footage for a quick video. 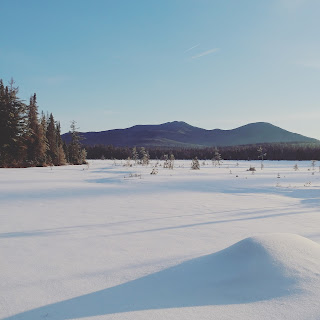