Winter arrives in the Adks

Originally the plan was to go to the Adks last weekend, but the weather report was forecasting terrible rains and snow. We opted to switch to this weekend instead. As it turned out, the weather called for more rain, however not as bad. We scheduled our plan B trip where a lean-to would be available. Unfortunately Rob and Justin could not make it  (in Justin's words, he wimped out), so it would be just Andrew and I. 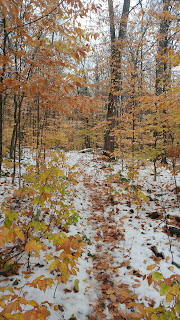 As we left Rochester the weather was nice, but this was not to last. On the drive it began to rain, sometimes quite hard. we hoped it would settle down a bit as we hit the trail. We donned our rain gear and headed down to the trail register. The air was heavy with the humidity and sprinkles would come and go. As we signed in, we noted a group of three were on their way out. We exchanged pleasantries and closed up the register box. The rain was on and off, but light. As it bounced off our rain gear it was all we could hear, not that there were many other sounds in this crisp fall morning. To call it fall seems strange as there was still remnant snow on the ground from the first snows of the season. The combination of wet snow and the downed leaves made for some slick walking. It was tiring. We paused for lunch at Catlin Bay and contniued North on the NPT. I was here last winter but it seemed like yesterday. We passed by the turn off to Hidden Cove and noted some boot tracks heading in the opposite direction. We figured it was a hunter. We stopped at Kelly's Point to rest and read the shelter logs. Both were new, so my entries from this past winter would be in the archives assuming the log books survived being burned by irresponsible campers.

While we rested, it was decided that we should stay here instead of continuing on. It would take extra time to gather wood in the area due to the extra distance and prepping the wet wood to start the fire. Plus our legs were tired from walking in the slippery wet leaves. We put our gear in lean-to #1 and set out to gather firewood before it started to rain again. As we were returning from our second trip we noticed two kayakers unloading gear into the other lean-to. Kayaks don't hold much gear compared to a canoe but they had hauled in quite a bit of dry seasoned firewood and beer. Quite the contrast from us. We set to work on getting our kindling split up to expose the dry interior. It was a good thing we stopped at this set of lean-to because by the time we started the fire it was already getting close to the time when we would be eating at dusk. An extra few miles would have made us starting the fire as it was getting dark. I seasoned up and grilled some venison and Andrew took out the marinated goose breast. As the meat was taken off the heat and sliced up we invited our neighbors over to have a bite. They had carried in a load of beer and firewood, but went minimalist on food. 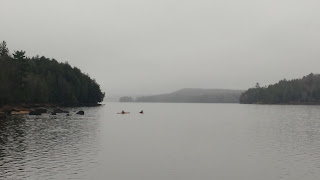 At some point while we were sitting around eating and talking a front must have come through as the air dried out quickly and felt warmer. We finished up our dinner and went over to our neighbors larger campfire. we hung out for a bit, and they shared some beer. Soon I was getting tired and we headed back to our lean-to and climbed into our sleeping bags. I was asleep fast. It was a warm night, much warmer than anticipated. I slept very well, only got up once to heed the call of nature. As the night turned to morning, I restarted our fire to get water on for coffee and tea. Andrew was also awake by then. 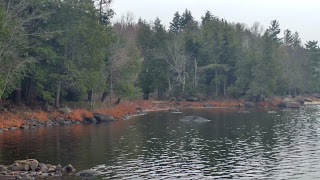 The fire was warming, as was the coffee. Soon some breakfast sausage was served. The guys next door were awake and packing up their gear. We had all morning so we didn't rush. The other guys set off in their kayaks and I wrote in the shelter journal. We finished packing up and were walking around 10am. It was much nicer walking without our raingear. A brief stop at the Hidden Cove lean-to, and noting the missing shelter log. I hadn't noticed the last few times that the hidden cove lean-to was significantly less wide than the typical lean-to. Curious. Someone had left a portable propane grill on the ground nearby. The walking was much easier than yesterday even though we were generally gaining elevation. The leaves were not sliding around under our feet as much. the creeks had much more water flowing through them but we were still able to rock hop without getting wet. Past Catlin Bay the trail was much more uphill and it really got our blood pumping and warming us up. A quick snack and we were back at the car a little after noon.
Posted by DuctTapeADK at 6:55:00 PM