Guided Backpacking Trip on the NPT

Every year I guide a section of the NPT for the ADK-NPT Chapter. This year I would lead a member along the first 37 miles which would include the newest section. Michelle did not care to hike the 3 mile road walk into town so we only did the trail section. Since it was only her, I was able to adjust the itinerary to meet her needs and go at her own pace.
I had sent Michelle the planned itinerary(subject to change), maps and the meeting plans. We met at the parking area on Collins Gifford Rd and then drove together in my car to Piseco. The original plan was a short day due to having to spot cars, and figuring those on the trek might need some acclimation to the trail. We made excellent time, Michelle did not care to walk in front so I set the pace, making sure I was not going to fast or slow. We stopped for our first big break at Hamilton Lake Stream lean-to. While having lunch, a group of day hikers came by heading in the other direction. We chatted a bit and they were on their way. As we approached the scheduled first nights campsite, it was so early and Michelle wasn't even remotely tired, so we kept going. After crossing the bridge at Whitehouse, we began the long slow climb to Mud Lake. I recalled the time we dragged roofing materials up this hill to fix the lean-to after it had a tree land on it. Michelle moved slowly on the uphills, I made a mental note of this. We filled up water at one of the small streams before Mud Lake knowing the shoreline was consistent with the name. We stopped at Mud Lake for a bit. To my surprise a few minutes later, Michelle said "Are we ready to get going"? At her request we continued on to Canary pond. We soon passed by a few hikers with bells on, I assume an attempt to dissuade bear encounters. They mentioned there were a couple of people at Canary already. The last few miles took a while. As is typical, it isn't the first 3 miles which are tiring, it is the last three.
We eventually got to Canary. There were two groups already camped. We found room a little ways away and set up. I helped on of the groups with their bear bag, as it was apparent they had never hung one before. He recognized me from one of Rob's videos. In fact him and his sister hiked into Canary after seeing it in that video. we chatted a bit, and with the other group. Made a quick fire and dinner, took a swim and watched the stars come out. While looking at the conjunction of Venus and Jupiter a fireball meteor streaked across the sky, at the tail end it fragmented. wow! I logged the sighting with the American Meteor Society: http://www.amsmeteors.org/members/imo_view/event/2016/3113
The next day we continued on to a bush camp we made off trail. This was a long day for both of us. Same amount of miles as the previous day, but we poked around slowly for the first half of the day. We did meet up with the fellow I chatted with online who was going in the opposite direction as us. The second half of the day would be on the newer section. The modern method of trail cutting is to switchback on the hills. This makes for less of an incline, but the trail takes forever. I could tell Michelle was getting tired, I was as well. So I thought to myself at the next water source, we would go off trail to find a place to camp. We both were in bed early. Rains came at some point in the middle of the night.
A slight rain and the drips from the trees were all that remained by morning. I packed up quietly and waited for Michelle to exit her tent. We had done a third of the miles already and we still had two days left. The new section continued its back and forth on the hills on the way to Woods Lake. We paused at the lake for a while, taking in the view. I pointed out to Michelle where we had come from off in the distance. At the road crossing, a couple from California were taking photos of the trailhead signage. As we crossed, they asked us some questions about the trail as they were considering hiking it sometime in the future. Back into the woods we went. We crossed Stony Creek by rock hopping. Were able to keep our feet dry. Any other time of year, or a summer with a normal rainfall, this would not be possible. Our goal for the night was Mud Lake, which would leave us just a few miles to go the next morning. As we approached, a kid was there at the campsite, just looking out over the lake. He had hiked in the short way just to check it out. It was quite windy as we set up camp, but it would subside by the later evening. I made a nice curry dish for dinner. Michelle noted there was a weak cellular signal, enough to get a text out. A couple of hikers came by. They were doing an end to end hike of the trail. Again, I was recognized from Rob's videos. I guess I will have to get used to it. We welcomed them to join us at the campsite, but they opted to press on a little ways. I would later find out they completed the full length of the NPT. Congratulations. I snapped a few pictures of the sun setting over the lake, and retired to my hammock. 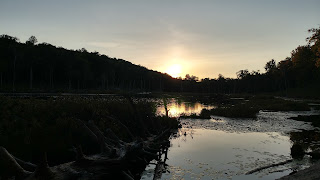 In the morning we got up early and finished the last few miles out to the awaiting car. Michelle would lead the way. At some point I am going to have to re-hike the entire trail as it now exists since the new reroutes, and new sections. I suppose that is my way of justifying going backpacking some more.