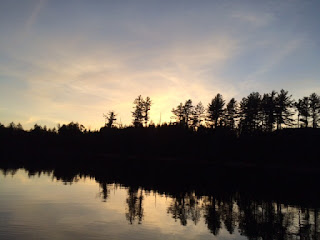 I had penciled in April as “fishing month” in the Adirondacks. After narrowing down my short list of trout ponds to visit, I received a message from a fellow hammock forum member asking if I was available to hike into Cowhorn Pond. Interestingly, Cowhorn was on my short list so we made plans to meet at the trailhead Saturday AM. Weather was looking to be perfect and I was glad to be getting back to the 5 Ponds Wilderness.

Met Lance at the parking area and we donned our packs. I attached a paddle to mine so we could enjoy the boat at the pond. As expected, the weather was perfect. We made good time down the trail, stopping often just to take in the scenery. Cranberry Lake was now completely ice-free; to distinguish from my hike in last month. When I signed in at the trail register I noted Bill I would be in close proximity to us. I wondered if we would run into him. This reminded me of when we first met in 2008 at Olmstead Pond when I hiked the CL-50 and how we would write notes to each other in the trail register in the Black River Wild Forest. While Lance took a break, I stopped over to Cat Mtn Pond to check out the campsite. I thought Bill might be here and he was. I interuupted his lunch, so I tried to keep our conversation short. We shared our itineraries and some of the spots we have explored in the past. I left him and Lexie to finish lunch.

By this time, Lance had leap frogged me on the trail and I was following his footprints in the mud. I noted the side trails to Bassout, and the old “Red trail”. I arrived at cowhorn a few minutes behind Lance. We set up camp and had lunch. I collected some wood from the beech stands behind the other campsite. We decided to paddle around a bit in the aluminum jon boat. I used the paddle I carried in, and Lance used one of the cobbled together contraptions which resembled a witches broom. There was a small leak in the boat, so we would have to keep an eye on the water level. First, we went a short ways down the outlet then along the far side of the oddly shaped pond. We paddled into some hidden coves. The terrain along the shoreline was steep in some of the coves. The water was still quite cold, and deep in the middle of the pond. We certainly didn't want to get more intimate with these two details. Years ago I had read about another campsite on the far side of the pond, so we kept our eyes peeled for a potential landing spot. The water level in the boat was such that we needed to to decide whether to turn back, or make a landing and empty the boat. We figured we would go around the next point and then cross to the other side. As we passed by the point, I spotted the remnant fire ring. In the shallows, some trash could be seen. We opted to make land, empty the boat and poke around the old campsite. It had clearly not been used in many years. The rocks which made the firepit were covered in moss. We could not see any charcoal as it was completely grown in. A few beer cans were found nearby. Old pull-tab Genesee Beer. There was even the corner of an old DEC sign for the special trout waters on a tree. The rest of the sign was laying nearby. Odd it hadn't blown completely away. Lnce took some photos and we got back into the boat and headed back to camp.

I collected some more wood. A group of 3 hikers stopped by. They were making their way around the CL-50. When they mentioned heading back to the previous tent-site, I knew they meant the one where Bill was staying. We mentioned the one nearby (not the one we paddled to) and they opted for that. It was close by, but they would still have their privacy which appeared to be what they sought. We started the fire and fixed dinner. Right after the sun moved below the tree line, we went out in the boat to try our luck with the trout. There were plenty of flies around the water, but we had yet to see any fish rising. We spent a few minutes with nary a bite. We could see our neighbors had a nice bright fire going. With our hopes of trout for dessert dashed we headed back to camp. We were expecting a clear night and it didn't disappoint. The moon was bright and Jupiter was nearby. We sat by our fire as the temp dropped and soon we were both too tired to stay up and headed to our hammocks.

I awoke at first light, but decided to try to get in a few more winks. I knew Lance had to get an early start, and if he wasn't up yet there was no sense in me jumping out of bed. Some time later, I was fully awake and craved some coffee. I restarted the fire from a small coal which was left from the previous night and got my water on. As it was heating up, I took down my hammock and tarp. I chuckled to myself about my buddy Rob's recent blog post about morning routine (and them being anything but). A common iteration for me to is to get water on and pack up while it heats. A cup of coffee, a handful of dried fruit and some breakfast biscuits was all I needed. Lance would head out before me as he had to work. I would leave soon after to explore some of the side trails on my way out. 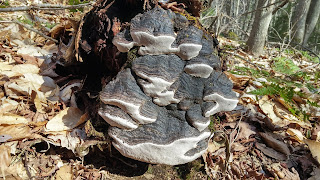 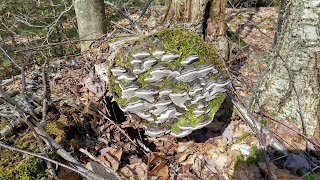 I first checked out the old “red trail”. It seemed to be even more clear than the last time I was on it. Also blue markers had been placed over the old red ones. It became clear to me the trail did indeed head towards Clear Pond. After about 20 minutes, I turned back. I wondered how far it had been cleared. No sooner was I back on the main trail, I ran into Bill. He was heading to the same trail I was just on. Apparently the new maps have it marked all the way to Clear Pond, so I guess it is an official trail now. I was both sad and glad at the same time. I wondered how long it would be before the rest of the loop trail would get cleared. It would make for some interesting backpacking routes in the area. I contemplated the idea of returning in a few weeks to go all the way to Clear Pond to camp, and potentially bushwhacking the rest of the old loop as my return route.

I ventured down a few other side trails, but not nearly as far as the old red trail. A lookout point above Glasby Pond, and the hunters camp trail near the flume. I could finally tell George about where that trail ended up. I snapped photos of some shelf fungus on the hike out and disturbed a couple of snakes. One allowed me (unenthusiastically) to take his photo. After Sand hill junction I could see an old trail heading into the valley. This path would follow the same direction as the main trail just on the other side. There was a small cliff face which still had a considerable amount of ice from the water running over it. I didn't take too many photos this trip, but this image needed to be captured or I might not even believe it. I had about 3 miles left to get back to the car, most along the old road bed. I knew it would pass quickly. Except for last month, it had been too long since I had explored the 5 ponds area. This trip reminded me I wrong to be neglecting it. I will be back soon I hope. 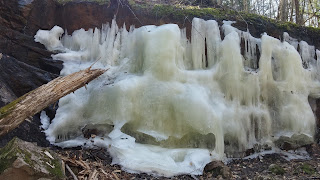