Most trip reports are chronological experiences. This one will be different and arranged in 2 themes; trail conditions and the people.

This trip was to be Ian's thru-hike of the NPT. At the trailhead he was taken to the hospital for emergency surgery. Thus this was to be a solo adventure for myself. Not a thru-hike of the NPT for a couple of reasons. First due to some “other trails” instead of the NPT proper and more importantly because I stopped at the Piseco general store.

The word which never describes the NPT is “dry” yet this was the one word which aptly describes the conditions. The fabled mess between Moose Pond and Duck Hole was a minor inconvenience of beaver dam walking in which my feet stayed perfectly dry even in mesh trail runners. The sloppiness known as the West Canada Lakes was a pleasant marsh hike along boardwalks which were not underwater. The stream crossings had nice rock and sand patio steps which almost seemed like they were put there just for the hikers. The only real mud was surrounding Tirrel Pond and Stephens Pond. I saw enough people at those two places with dry sneakers to know if was quite possible to traverse the area and stay dry. The only stream crossing which I forded to my calves was the horse trail crossing of the Cold River to the west of the Cold River #3 leanto.

While blowdown was a common occurrence, enough hikers have come through to break off branches to allow relatively easy passage through the crowns which crossed the trail or a quick path around was easily followed nary missing a beat. One area which was very clear of blowdown and the maintenance was second to none was between W. Canada Cr and Spruce Lk. The maintainers there had just gone through and cut (with a 6 ft cross-cut saw) the large logs and cleared passage through other blowdown. He also cleaned out the drainage channels to allow for future run-oof to to not flood the trail. The sections which previously went through boot-sucking mud holes have been routed (and marked) just a few feet from the original trail. Though this week, one could have easily walked through what now looked like setting asphalt without worry of losing one's shoe.

The new section of trail between wakely dam and Stephens pond is very nice. A stark comparison between the million mile road walk which it replaced.
For those traveling south, it will be quite obvious when this section begins as the trail is on higher ground and away from the muckiness. For those traveling north you will notice quickly when you regain the old trail just before Stephens. some very young forest and very neat rock "cliffs" will be passed along with some cool streams in which to replenish water supplies. In the middle of summer, the green obstructed any view from the ridgeline, but I suspect at other times of the year there would be quite a view from a few places. As the section is new, there are parts where the tread isn't obvious, but there are enough markers to make navigation easy. Near the Cedar Lakes Rd, the trail follows an old rd which makes for very easy walking. Some other old rds intersect but no indication of the correct path is indicated, so the traveler must know to "stay the course". There will be some ADA compliant campsites along this section of trail in the near future, hence some vehicular traffic evidence (ATV?) will eventually be observed.

The people or “the artist, the student, the redneck, and the ukranians”:

At Duck Hole a retired artist from Rhode Island had carried in almost 70 lbs of gear. (approx 1lb per year of age). His name is Peter. He had spent 3 days at Wanika Falls, another 3 at moose Pond and this was his first of 3 nights at Duck Hole. He would repeat this agenda on the way out. Most of his gear was art supplies. He had many sketches of the area including 4 of July fireworks while out there. All of his sketches were numbered. I noted he was currently in the 29,000's. He also visits the Adirondacks on schedule, according to the moon cycles. We spent a few hours waxing the philosophic. I hope to be enjoying the adirondacks with a similar awe and wonder as Peter for many years to come. I will forever appreciate his perspective.

Devin from Santa Cruz California is a student on break from his studies. His college is set in a redwood forest so it was interesting to hear him talk of the adirondack forest with such reverence. Devin is spending two weeks hiking from Blue Mt Lake to Lake Placid before heading to the Atlantic Ocean. Like Peter, Devin gave me a new perspective of the Adirondacks. Devin was seeing the wonders of the area for the first time. Every view was a new one and he engorged himself in it fully. Though the trees and mountains were much smaller from the mountains and forests in California did not make it inferior in fact it enhanced his experience. The Adirondacks were unique.

Long Lake is known for the boaters and while midweek it was relatively quiet, there were still a few at the leantos. At Rodney Pt 1 &2 were some gentlemen who floating in enough Stewarts firewood to make International Paper wince. After my previous encounters I tried to appreciate how these guys viewed the Adirondacks. For them it was simple, a place of escape from the hustle and bustle and enjoying the surroundings with some good buddies. For them, the beauty needed to be shared, and shared over a nice cold beverage which they offered to yours truly. As it was 80-something degrees, how could I say no. The shared experience with strangers is something I have always personally enjoyed about the Adirondacks and I was happy to share it with these gentleman even though I would not have carried in an XM-satellite radio system. The cold beer didn't hurt either.

At the other end of the lake is Caitlin Bay where Serge, Nic, Nicolita (8), and Artem (12) were fishing and camping “away from the women”. While Ukranian by birth Serge was as American as they get. He made extra effort to show me his Nalgene was “made in America” and that his boys were “born American citizens”. To him, the Adirondacks was “America” it all of its greatness. This was what he struggled to bring his family to and be thankful for. I was very thankful for their generosity and the Coronas (I did say no when they cracked open the 150 proof vodka).

Some may wonder why I stopped at Piseco. I was feeling great in fact I was actually really getting in the groove. I had hiked from Spruce Lake #2 to the Piseco Gen Store (about 12 miles) by 11 am and was ready to keep going. After eating a sandwich and being back in “civilization” coupled with txts and voicemails from the home I knew I would not be able to appreciate the woods without the mental intrusions of the real world. That and it just didn't feel right to start and finish Ian's hike without him. 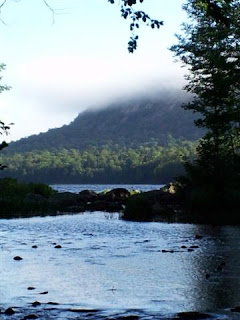 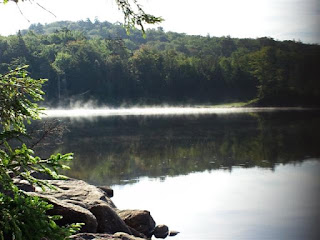 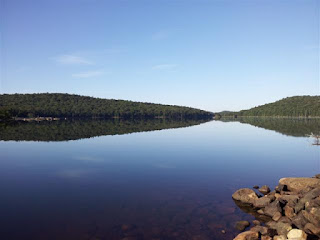 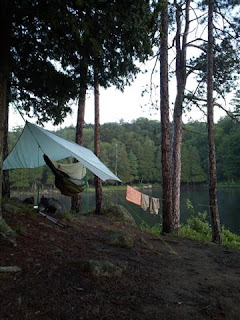 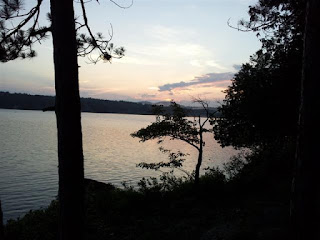 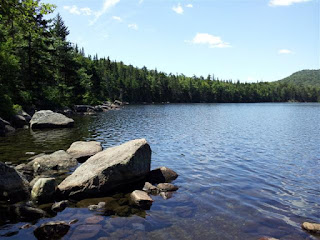 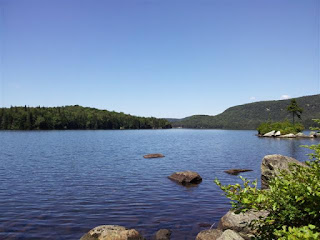